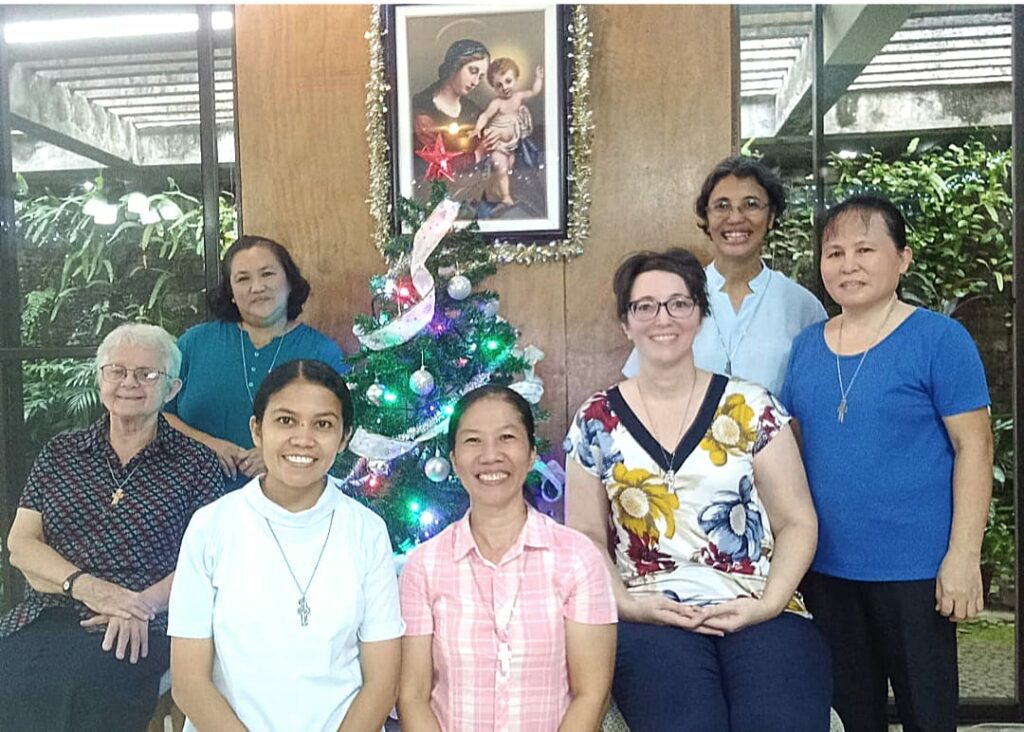 “So, I leave my boats behind/ Leave them on familiar shores/Set my heart upon the deep/ Follow you again, my Lord”

– from “The Galilee Song” by Father Frank Andersen, Missionaries of the Sacred Heart

A teacher friend recently posted a picture of herself on Instagram; she was out for a winter walk in Edmonton.  I felt an unexpected tug at my heart upon seeing her and the familiar, deep snowbanks. Living in the Philippines this year has meant that I’ve experienced only green scenery and hot temperatures. The wintery scene reminded me that I am very far from home indeed, even as I continue to delight in the many opportunities that I enjoy in this vibrant country.

Mark Twain wrote that a man who carries a cat by the tail learns something he can learn in no other way. What I’m experiencing now is that a Canadian teacher temporarily residing in Metro Manila learns something about herself and many of her former students that she could not learn in any other way.

I have listened to stories about the Philippines for most of my teaching career.  Long before I ever arrived in this warm and welcoming country, former students had educated me about jeepneys and tricycles (common modes of transportation here) and Christmas celebrations that begin in September.  I had heard about favourite local foods, including roasted pig and bibinka and balut. On countless occasions, Filipino students have shared about the place of their birth with a wistfulness that made me even more curious about this faraway nation.

Now that I have had the opportunity to live in Manila for a few months as part of my International Year (a part of the formation of Faithful Companions of Jesus sisters in Temporary Profession), I have discovered that I am inspired by all those who have dared to leave this tropical, archipelagic nation to live in North America.  In the process of settling down here, I have come to experience more deeply that living in a new country is about much more than adjusting to a different climate and an unfamiliar language.  While the opportunity to live in a foreign place can seem like an adventure to be sure, once the ‘honeymoon period’ wears off, the day-to-day lived experience can test one’s understanding of how one fits into the world.

To the homeless people who ring the bell at our convent in Quezon City, I am referred to using the adjective “matangkad”; that is, I am the “tall” Sister. By Canadian standards, I am of average height, but when I walk on the sidewalks here, tree branches are trimmed in such a way that I must duck my head.  When I travel in standard jeepneys (small public buses), I sit too high to be able to see out the windows.  The tricycles (a kind of motorcycle with an attached passenger cab) are perhaps only a little larger than my coffin might be someday.  This is a city that, on the whole, was not built for people of my ‘great’ height.

My size is just one way that I can feel like a fish out of water.  My first week here, I was reprimanded by security for talking to another Sister on the light rail train as Covid protocols here require silence from passengers.  On another occasion, during a meal together a student asked me if I always used a fork when eating rice.  My affirmative response was clearly surprising (and even a little bizarre) to him as many people here routinely eat with their hands.  Even asking for help finding an item at the grocery store can turn into a frustrating interaction when it becomes apparent that the foodstuff I’m requesting goes by a different name in the Philippines.  The occasional cockroach wandering into the house can, on my worst days, feel like the stuff of nightmares.

There is something about living in a different place that can, at times, strip us of our sense of belonging.  It can seem like a lifetime of learning has not prepared us for current circumstances and we are children again, learning everything for the first time.  Sometimes, it is utterly exhausting and even deeply emotional.  When, I can not understand or be understood, when it’s a struggle to perform even simple tasks, it can invite the question: was coming here the right decision?

In the Scriptures, little is said about the reactions of the fishermen that Jesus called on the shore of the Sea of Galilee.  In the Gospel of Matthew, their response is encapsulated in eight words: “Immediately they left their nets and followed him.”  And yet, these men were leaving nearly everything they knew: their livelihoods, their homes, and surely many family members and friends. Some of them, the New Testament later tells us, even went on to travel all over modern-day Europe.  This cannot have been an easy thing, so what sustained them in those moments when they were feeling far from home?

In reflecting on their experiences in his hymn ‘The Galilee Song’, Australian priest Frank Andersen, MSC, writes “I feel my spirit called like a stirring deep within/ restless ’til I live again beyond the fears that close me in.”  In these lyrics, I recognize something of the process that has helped to sustain me during my transition to life in a new country.  Firstly, to start trying to ‘live beyond the fears’, it has been necessary to name the anxieties that ignite within me when my height or my limited Tagalog (the predominant language in the Philippines) or my ‘strange’ Canadian customs result in embarrassment or difficulty in the routine of my day.  Naming them has meant being honest with myself, sharing about them with the members of my community, and taking them to God in prayer.

It is in the silence of prayer, that I can become more deeply aware of the ‘stirring deep within’, the voice of the Spirit, inviting me to a place beyond my insecurities.  It is in this place before God that, gradually, I start to see that the worries that plague me have no foundation, that they are formless and without substance.  It is here, too, that I experience gratitude for the companionship of God who intimately knows my anxieties and gently challenges me to release them.  This process of letting go takes time and deep-rooted honesty and humility.  It is the work of a lifetime.  Thankfully, God has the patience and persistence to be with me every step of the journey.

As I recall my former students and think of all the people who have relocated to Canada, I am inspired by the courage so many have shown in leaving their “boats behind” on “familiar shores.”  As millions of immigrants have learned to find their way around unfamiliar cities, taste new foods, adjust to language differences, purchase heavier clothes for cooler weather, and make sense of a different political landscape, they have also been invited to acknowledge their insecurities and move beyond them in a challenging, exhausting process.

However, God’s challenge is for everyone:  we all carry anxieties with us in the ebb and flow of our everyday lives, whether we are living in new places or not.  Perhaps you, too, are aware of the ‘spirit deep within’ inviting you to reflect on uncomfortable insecurities today.  What ‘familiar shores’ is God calling you to leave behind, even if only for a few hours?  How are you being encouraged to ‘live again beyond the fears that close (you) in?’  In the quiet of prayer, listen for God’s invitation to greater freedom as you, too, set your heart upon the deep.

-Sister Michelle Langlois is living in the Philippines for one year as part of her International Year, a part of the Formation program of the Faithful Companions of Jesus sisters. She is a former chaplain and a teacher at St. Thomas More junior high school in Edmonton. She received the 2021 Excellence in Catholic Education award from the Edmonton Catholic School Division.