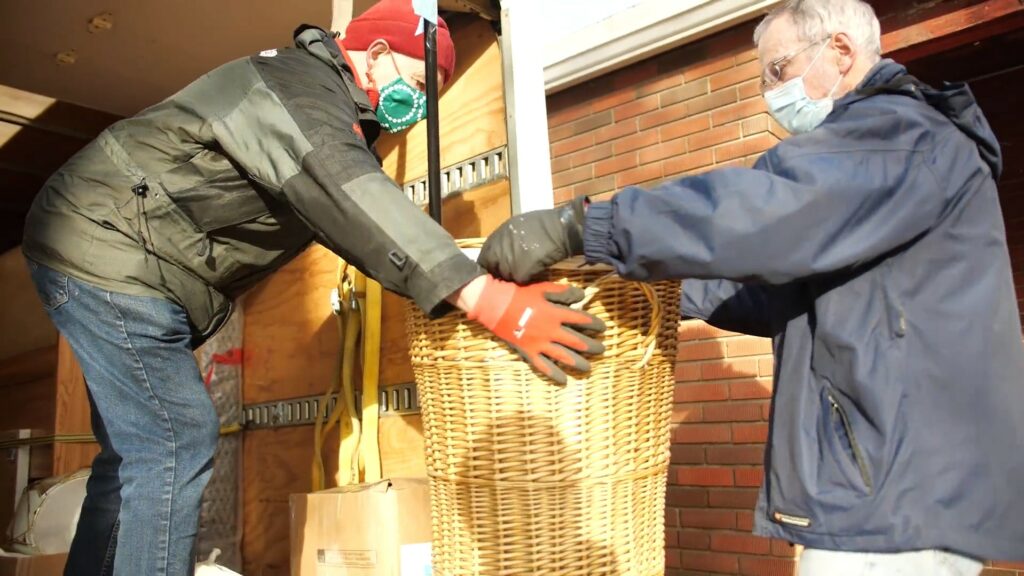 When life was unraveling for single mother Amber Greve and her four young children, St. Vincent de Paul Society volunteers helped her family keep it together.

“We went through a separation and kind of had nothing at home,” said Greve, who is not working right now. “They’ve helped us with some of everything – groceries, clothes for my kids, my daughter needed a computer to complete her schoolwork.”

“It’s been amazing and kind of sad at the same time. It’s hard to accept help, but they’ve made it just so easy. Knowing you’re in a position that you can’t do it on your own, especially when you have kids, is really hard. It’s kind of embarrassing but they make it really easy on you.”

The Greves are among the thousands of Edmontonians who receive household items, food, clothing and furniture and home visits from the local chapter of St. Vincent de Paul Society. Last year, 6,503 people received assistance — including 2,756 children, according to its annual report.

“It has to be done. Who’s going to do it if each of these people here don’t make the commitment to do this kind of work?” said Stephen Dufresne, president of the St. Vincent de Paul Society’s Edmonton central council.

“Our Catholic faith teaches us that we have to be concerned about our sisters and brothers and how they’re managing in life, and help them in ways that we can. As our Catholic Social Teaching tells us, that’s what we’re supposed to do: help others.”

Four years ago, Pope Francis established the World Day of the Poor and it’s been observed ever since. This year’s theme is “Stretch forth your hand to the poor”, a call to responsibility and commitment of all men and women to one human family.

On Nov. 15, Edmonton Archbishop Richard Smith will celebrate Mass at noon with the parish community of Sacred Heart Church of the First Peoples. The Mass will be live-streamed from the Sacred Heart School gym.

Afterwards, an estimated 250 backpacks of winter clothing, underwear and toiletries will be distributed to the needy who are present at Mass, as well as throughout the neighbourhood. The backpacks are filled with winter clothing, underwear and toiletries collected by Evergreen Catholic School Division, in partnership with Catholic Social Services.

And the need is great. One in 10 Edmontonians — or about 119,950 people — live on low income earning a median of $27,790 per year. Over half of low income people in the city are women, and nearly a third are children, according to the Edmonton Social Planning Council. And those numbers are prior to the COVID-19 pandemic.

The biggest misconception of the poor? ‘They are a drain on society.’

“I think a lot of people figure we’re just mooches,” Greve said. “People are ‘asking for help when they don’t actually need it,’ but the reality is we do need it. If it wasn’t for people like St. Vincent de Paul, some of us wouldn’t be able to make ends meet.”

Even at 13-years-old, Greve’s daughter Kailyn Rogers feels the sting of poverty: “I understand what my mom’s saying,” Kailyn said. “Accepting their help, it’s like making them take our responsibility. I understand why that could be embarrassing, but we’re really thankful that they’ve helped us a lot.”

St. Vincent de Paul has two buildings in the city, one warehouse with big furniture items, and a distribution centre — packed to the rafters with household items — in the former chapel on the St. Joseph High School campus.

A team of St. Vincent de Paul volunteers used to do home visits to assess each client’s needs, but now due to COVID-19 restrictions a telephone call is made to speak with clients and assess their needs. The society also works to arrange for volunteers to pick up donated items if there isn’t a way they can be dropped off.

The St. Vincent de Paul Society says its clients cover all demographics, from young refugee families to seniors having trouble making ends meet. Volunteers say in some cases, clients just need a few items, in others, they need everything.

Sometimes the St. Vincent de Paul Society doesn’t have exactly what’s required. Clients need kitchen tables and chairs in particular, so much so that sometimes volunteers will use donations to buy them new. When they don’t have enough dressers, they’ve been delivering shelving units. When they didn’t even have a coffee table, they cleverly found a large wicker basket that could instead be used as one.

Amid the COVID pandemic, beds — singles and doubles in particular — are in very short supply, and so is food.

If clients need additional help beyond the St. Vincent de Paul Society, volunteers will refer them to the Edmonton Food Bank and other agencies.

Unlike other charities, the St. Vincent de Paul Society receives no government funding. Yet agencies like the provincial government’s Alberta Works refer clients to them, especially now during the economic downturn, Dufresne said.

At the start of the pandemic, the number of St. Vincent de Paul clients dropped as many relied on federal government assistance like the Canada Emergency Response Benefit. But now the number is rising.

He supports a Universal Basic Income, a concept that Ottawa is studying.

“Some of the need requests that we’re seeing are significant, beyond our capability. I remember hearing a conversation with someone that they were looking for help because they were $137,000 in debt.”

The St. Vincent de Paul Society shut down briefly when COVID-19 hit, but it has re-opened with precautions. Pick-up and delivery of donations is at the doorstep. And volunteers — most of them retirees in their 70s — now have less personal contact with clients.

It’s understandable, but it took some adjustment.

“It’s a good feeling when you bring stuff to a family, and they say ‘Thank you, thank you, thank you’”, said Dan Dunnigan, 73. “Sometimes some immigrants, they need you to come in and have a cup of tea. We say ‘Sorry, we’ve got other deliveries to do’, we bow. We used to hug.”

After a volunteer shift, Dunnigan returns home grateful for what his family has.

“So often we hug and say how lucky we are,” Dunnigan said. “There are people who, just two months ago, they were living well.”

Volunteers are always needed at the St. Vincent de Paul Society. What’s needed even more so, is a younger generation to pick up the torch. The average age of its volunteers is older than 70.

“I belong to a parish that’s very multicultural, and it’s not a very well-to-do parish at all, and there were parishioners who needed assistance,” said Lupul. “There’s something inside that wants me to do this. I can’t see myself doing anything else, but to help people. Sometimes you arrive at the house or the apartment and it’s completely empty.”

Over time, some of her clients are so close that they have become friends. One family, of a single mother, has become so close Lupul is referred to as “Mom” and the two kids call her “Grandma.”

“They needed a lot of help. She wanted the help and she wanted to move forward, and so we kept helping. She’s on her own now. She has a couple of degrees and she’s done well.”

The Greve family is so thankful that the kids — Kailyn, Jacob, 10, Lily, 8, and two-year-old Mackenzie — plan to make cards for the St. Vincent de Paul volunteers. It’s a reminder of how far they’ve come. It’s also a caution that some families are just one paycheque or crisis away from needing help.

“You never know what’s going to put you in that position,” Greve said. The needs remain great.

And without a collective will, Lupul said poverty will remain.

“I don’t think it will be solved,” said Lupul, wearing a St. Vincent de Paul medallion around her neck.

“You might make a dent in it, but I don’t think it will ever be solved.”