Daisy Wilson watched them step down from the buses and into a world of unknown.

They were vulnerable women, many from small town and remote northern Alberta, arriving alone at the Edmonton bus depot. Often they were accosted by strange men who sought to exploit them. Wilson wanted to help them, even if it was just to have a coffee and chat.

However, this was 1969. And for women fleeing violence, there was no concept of a women’s shelter, only the inevitable risk of more violence. This wasn’t right.

Wilson brought the issue to her sisters in the Catholic Women’s League, where she was president of the Edmonton diocesan council.

“We thought it was horrifying. None of us knew that there wasn’t any shelter for women,” said Rose-Marie McCarthy, now 82, who served on the CWL executive with Wilson. “Daisy just wanted some place for them to be safe at night so that they didn’t have to sit at the bus depot. She never even thought of a shelter.”

They used the might of their organizational skills and sheer determination to start what would eventually become the Edmonton Women’s Shelter, one of the first emergency shelters in Canada. They started EWS, a charity to raise money. Over the years, the EWS developed the WIN (Women In Need) Houses for women fleeing domestic violence.

“We said we believe, and today we say the same thing, that all women have a right to health and to move forward,” said Ardis Beaudry, now 91, a veteran member of the CWL. “And that doesn’t happen overnight.” 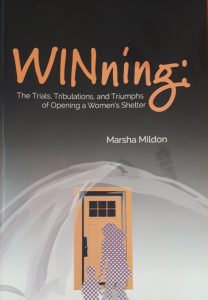 Marsha Mildon details the history of the extraordinary women who helped start Edmonton Women’s Shelter, which later became WIN House, in her new book WINning: The Trials, Tribulations and Triumphs of Opening a Women’s Shelter. It’s a story of challenge and change, setbacks and successes, against the odds. Mildon herself volunteered there in the early days.

“The foundation that they laid for the shelters we have today is just remarkable,” said Tess Gordey, executive director of WIN House. “It was really new. You can see throughout the book that it involved so much of a voice to get recognized, insofar as even getting enough funds together.”

While WIN House receives funding from government, it needs to raise approximately $1.2 million every year to maintain its programs. And that isn’t always a sure thing. Just five years ago, a lack of funds threatened the closure of Carol’s House.

Social action and fundraising have always been part of the Catholic Women’s League. “It was something we knew, that as women and women of faith, that we had to help our community,” said Rose-Marie McCarthy. “It’s still what we do. We’ve learned that we help our neighbour whether they are Catholic or not.”

“It took a long time for anything to happen, but Daisy Wilson was very persistent,” Beaudry added. “She was concerned about the young women who were coming into Edmonton, and so she didn’t let it go.”

In 1968, 28 organizations  ̶  women’s groups, church groups and social activists ̶ met to discuss the idea of a place for women fleeing violence to meet without fear. It was a new concept in a society where few women even had their own bank accounts and there was no social welfare for women without children.

“There was such a divide between resources available depending on your gender, and the attitudes back then were even more around a kind of patriarchal society,” Gordey said. “They really did what they had to do.”

They called, and met, with anyone they knew who had an interest in women’s issues, native women’s issues and social justice: United, Anglican, and other women’s and church groups, and the Edmonton Social Planning Council. They formed committees, made lists and assigned tasks. As homemakers they were experienced organizers and multi-taskers, and they knew where to find everything from funding to facilities to furniture to simple items like a coffee urn.

“Nobody could have had experience, because there was no experience,” said Mildon. “But everybody understood: Women needed a safe place for the night other than selling themselves on the street.”

In 1970, All Saints Anglican Cathedral offered space in its basement, and the first Edmonton Women’s Shelter opened there with one staff person. The women slept on floor mats and depended on the YWCA for breakfasts. On Sept. 26, 1973, it was incorporated as a non-profit corporation.

The first WIN House, for women and children fleeing violence, opened in 1978 with the help of the Clifford Lee Foundation, which bought a house and leased it to the women’s shelter society for $1 per year.

“If that hadn’t happened, I honestly wonder if there would have been a shelter,” Beaudry said, recalling how surprised organizers were at the resistance to the idea of even an information storefront.

“They didn’t want to get involved in it. But Daisy didn’t rest there. She became involved.”

Fundraising is an ongoing task even today. Back then, organizers personally visited other women each week to talk about the project and raise money. That first year, 1970, it was all community donations. Later, after some resistance, government funding followed.

That first women’s shelter was decades ahead of its time. Gordey said concepts such as giving people a safe place as the first priority and a low-barrier model ̶ reaching women who may be self-medicating – are considered best practices today.

By 1977-1978, other shelters had sprung up in Alberta and across Canada. But even after a couple of years, the Edmonton Women’s Shelter had to overcome resistance – including among women’s and church groups – for helping and sheltering battered women.

“We had a lot of contention in our meetings because we’d be accused of breaking up families,” McCarthy recalled. “We were trying to say (violence) is an intergenerational thing. It’s a learned culture. And we have to break that.”

The need was so great that a second shelter, WIN II, opened in a brand new house.

The shelter society couldn’t get a mortgage for a new shelter, but Beaudry had actually dreamed that another facility would open and “the nuns would pay for it.” After making presentations to women religious, a $300,000 donation came within weeks to build WIN II. The only condition was that the donor remain anonymous.

Today, the founders of the Edmonton Women’s Shelter are grateful their story is on record for future generations. Some of their families didn’t know exactly how their mothers were involved.

Rose-Marie McCarthy stayed involved in the shelter movement for decades. She served on the board of WIN House and WINGS of Providence, a second-stage shelter in Edmonton. She was executive director of a shelter in Hinton, and served on the Alberta Council of Women’s Shelters.

Daisy Wilson, a 70-year member of the Catholic Women’s League, was honoured with an Alberta Achievement Award for community service. She died in 2011 at nearly 100 years old. 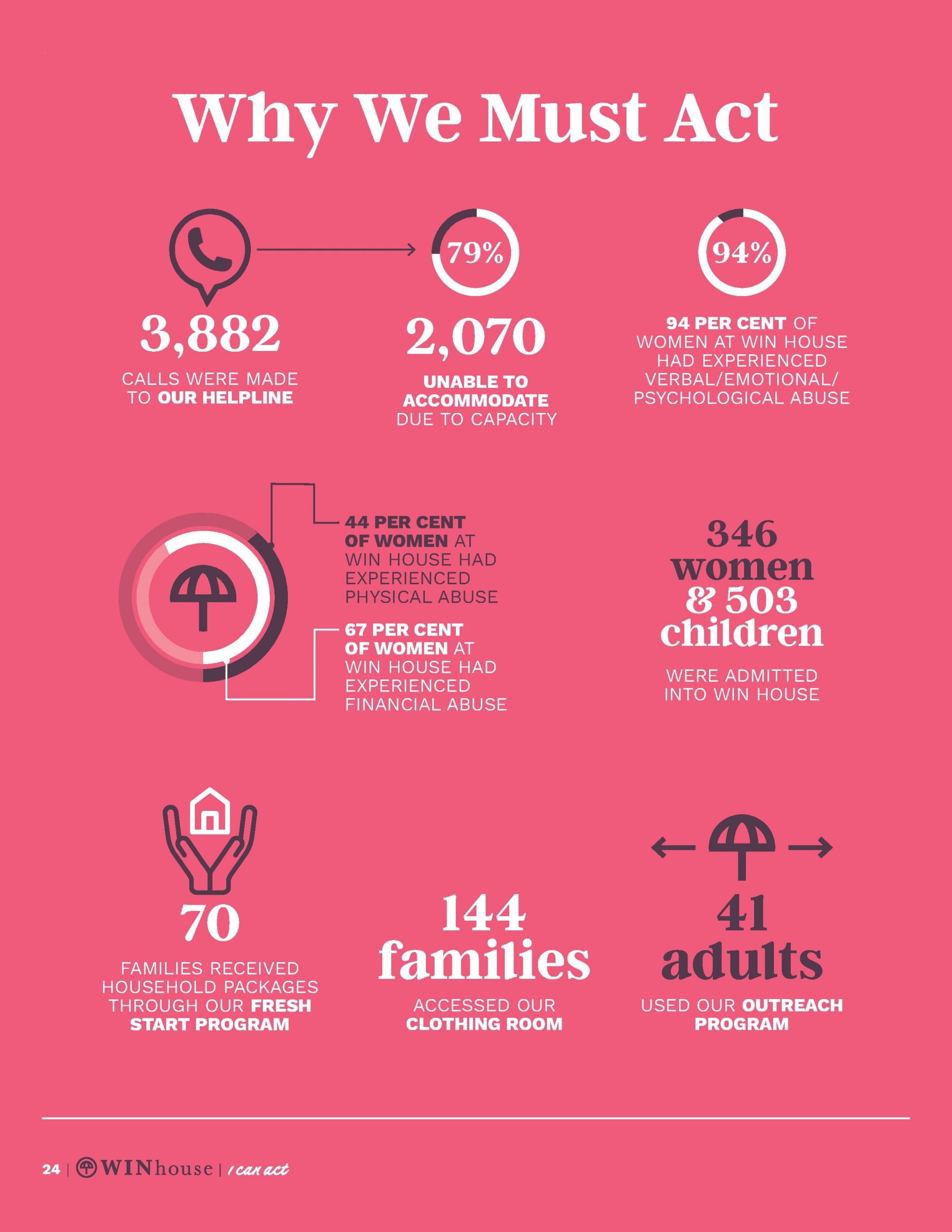 After five decades, for all the successes of the movement, there is still a need for a shelter for women like those who stepped off the buses back in 1969. The founders say that won’t change until women achieve real equality.

Tess Gordey has been executive director of WIN House for six years, but she has worked in the field for more than 30. The lessons she takes from those founders include collaboration, perseverance, community engagement, and education so that those who need it know how to access it.

“Definitely attitudes, our societal norms and our tolerance for domestic violence has decreased over the last 50 years,” Gordey said. However “the more we reach out and inform, the more we learn the magnitude of the issue. Right now, even provincially, we’re only serving half the people who come to us. As we increase that knowledge in the community, more victims and survivors will surface.”

Gordey also noted that some new Canadians have come from countries that have a far different attitude to domestic violence.

“We’re just still really opening that door for people to come forward, and additional change to happen. There are still limitations of resources compared to demand … There’s a lot of work to done. Our services are going to continue to be essential for a long time to come.”

In spite of those challenges, the CWL members who faced their own ups and downs starting an Edmonton shelter have retained a key ingredient to their success: Hope.

“If you asked me 45 years ago, I would have said ‘Oh yes, we’ll fix this’ but that’s not going to happen,” Rose-Marie McCarthy said flatly. “Society has to change so that we’re all equal. Black lives matter. So do women’s. I would hope in the next 50 years, things will change.”

Ardis Beaudry adds: “When you look back at what women went through 50 years ago, and how they are today, you have to believe that the sheltering movement was really needed. It’s around the world now. Is it going to ever stop? Well, we don’t know.

“Fifty years is a lifetime. You’ve got the time; you just have to have the energy and the will to make things better. And I think we have succeeded.”