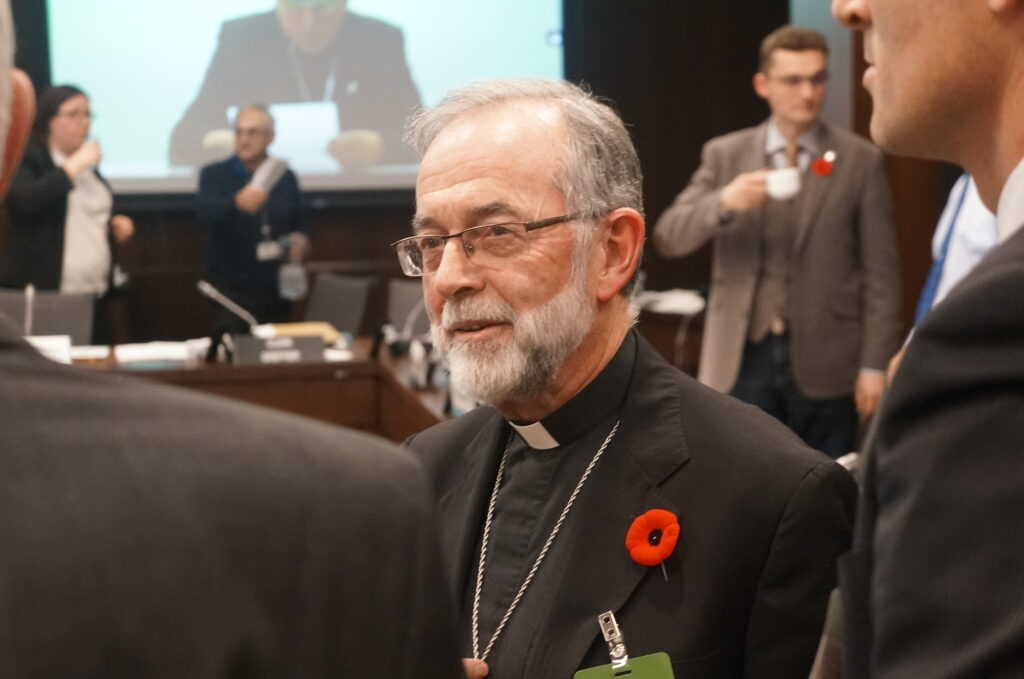 Canada’s Catholic bishops say removing a section of the Criminal Code protecting clergy and religious services from obstruction would “send a disturbing message.”

“More than ever we need to legislate protection for religious services taking place,” Cardinal Thomas Collins of Toronto told the House of Commons Justice Committee Oct. 30 via video-conferencing.

The cardinal said the bishops wished to “convey our grave concern” over Bill C-51’s removal of section 176 from the Criminal Code that makes it an indictable offense to threaten or obstruct clergymen or ministers from celebrating services or going about their work.

Its removal would “send a disturbing message from Parliament to all religious communities,” the Cardinal said.

“We believe attacks on religion are not like other attacks against public safety — they are not only more grave but threaten the essence of democracy itself,” said the president of the Canadian Conference of Catholic Bishops, Bishop Lionel Gendron of Saint-Jean-Longueuil. “This is because religious freedom is the cornerstone of human rights.”

Bishop Gendron said the CCCB would be soon join in the issuing of an interfaith letter signed by the conference as well as Jewish and Muslim faith leaders in support of keeping section 176.

“Section 176 of the Criminal Code is a deterrent and educator concerning particular threats with which faith communities can be faced,” said Bishop Gendron. “If the recent rise of hate crimes and prejudice against religious believers in Canada is any indication of the dangers that lie ahead, the removal of this clear and unequivocal section of the Criminal Code will make it harder to protect millions of Canadians who are active members of their faith communities.”

Section 176 represents our “shared belief in and respect for the freedom of religion and maintains an indispensable link between the Criminal Code and the protection of fundamental human rights,” he said.

Section 176’s protection of religious ministers from assault of obstruction in carrying out their duties protects “the community of faith by ensuring that the exercise of religious freedom is not impeded by acts of violence or threats which are directed against its faith leaders,” the CCCB president said.

The Liberal government has argued Bill C-51 removes redundant and archaic portions of the Criminal Code and behavior covered under Section 176 is addressed in sections governing assault, making threats, causing a disturbance and provisions covering hate speech and crimes.

“If you’re disrupting a religious service, you are causing a great deal of turmoil to a lot of people,” said Bruce Simpson, a criminal lawyer who accompanied the CCCB delegation. “It doesn’t matter why you’re doing it.”

The section “covers conduct not otherwise covered” in the Code, Cardinal Collins said. “We must recognize that there are ways to ‘willfully disturb’ a religious service without screaming or shouting. A silent protest, unfurling a banner, blocking a procession, etc. can all prevent communal prayer and worship from taking place.”

“We accept the right of people to peacefully demonstrate” in public places but at the same time “congregations have a right to gather without being impeded,” the cardinal said.

“I think most people know it’s illegal to disrupt a religious service, but if you take it out, maybe they’ll find out it isn’t,” Simpson warned.

Also making presentations to the Justice Committee Oct. 30 were the Evangelical Fellowship of Canada, B’nai Brith Canada, a Jewish human rights group, and the Association of Reformed Political Action (ARPA) who all urged the government to retain the section, though Lawyer and Professor Janet Epp Buckingham, appearing as an individual, said some archaic language in the section such the words “clergyman” and “minister” could be replaced by “religious official” and with words added to show both men and women can fill that role.