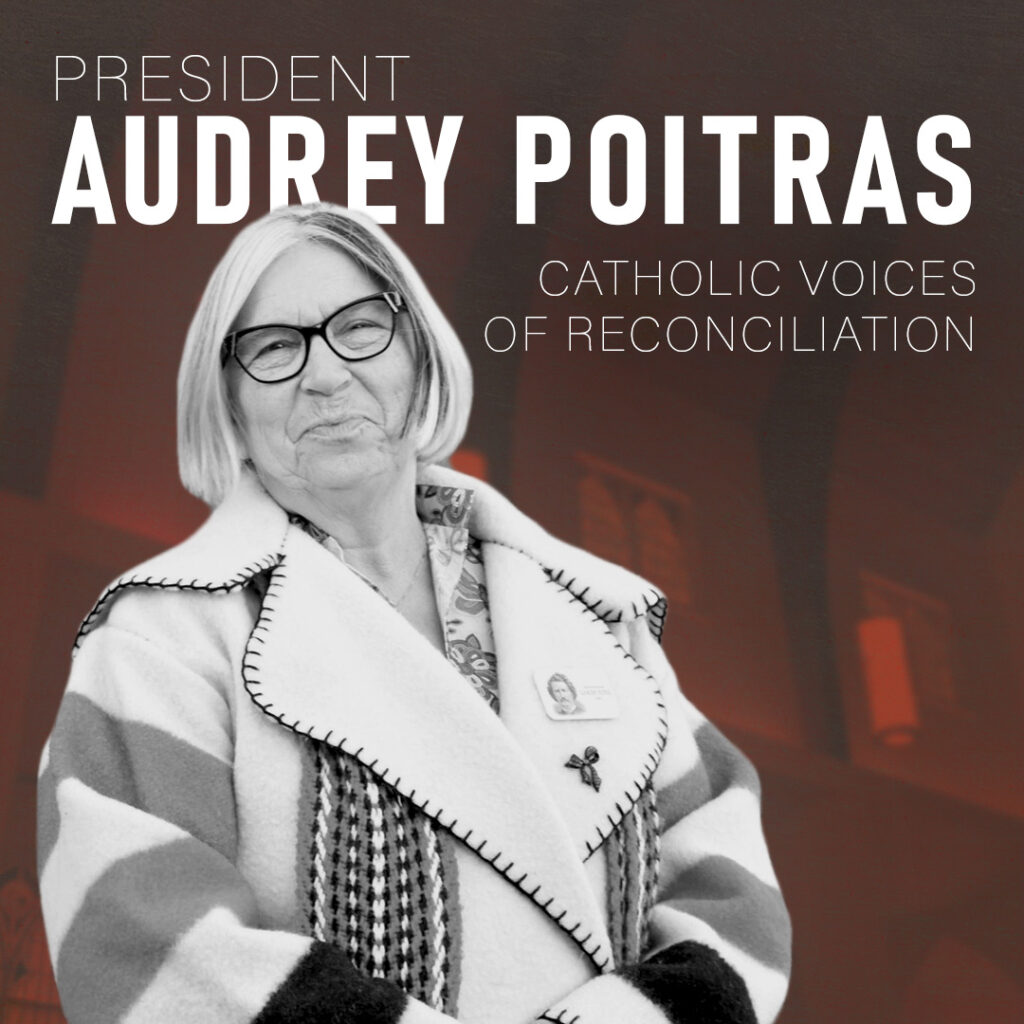 Catholic Voices Of Reconciliation is a series of interviews with Catholic First Nations individuals who were a part of Pope Francis’ visit to the Edmonton Archdiocese. We asked each of them three questions about their experience as both followers of Christ and First Nations people and practical ways that local Catholics can support truth and reconciliation.

Audrey Poitras is president of the Métis Nation of Alberta and she was a member of the local organizing committee who welcomed Pope Francis to Canada and to the Lac Ste. Anne portion of his 2022 Canadian Papal visit. Poitras was also a member of the First Nations, Métis and Inuit delegation that met with Pope Francis in Rome in March 2022.

What is one way that the Pope’s visit has impacted you?

Lac Ste. Anne has, you know, been for most of us, as Metis people, a place where we go for the [annual] pilgrimage. And so to actually have the Holy Father come there was amazing. Having him speak to the people right out there in the shrine was amazing. And that is what I’ve heard from people ever since it happened.

I was part of the welcoming committee when he arrived [at Lac Ste. Anne]. . . and then we had the walk down to the lake, where he blessed the lake and then into the shrine (at the pilgrimage site) to do the service.

It was an honor to be able to be there.

What is one practical way that people in your local community can support the continued healing between Indigenous people and the Church?

I believe once people understand [what happened] Indigenous people will feel more comfortable joining in, in communities. Right now, for a lot of communities, they still feel that they are the outsiders. Once people accept the truth and understanding why [indigenous people] feel the way that they feel, we will all want to move forward together.

It is also important to make sure Indigenous people are seen and accepted as equal human beings who are meant be part of a community, not to be seen as “them over there” and “us over here.”

One the elders that I had the honour of listening to when we went to the Vatican, said it beautifully, “You know, I’m really glad I came. Not that the past will ever be forgotten by me, but I believe now I can leave it in the past and look forward to sharing the future with my children and my grandchildren. And not always be bringing up the past. . . I want to move forward!”

What is one way that the efforts towards truth and reconciliation have blessed you personally?

Prior to going to Rome, when the Truth and Reconciliation Commission was coming together and started to do their meetings across the country . . . when they had their final “big meeting” there in Edmonton, I was there to witness hearing what our people had to say.

Clearly, one statement that stood out to me, from many of the survivors was, “reconciliation will never happen unless people hear and accept the truth of what did happen” and then we can move on.

That’s what I heard all along and I took it as a positive step towards where we needed to get to.

So, following up on that, when it was decided there was going to be a trip to the Vatican [in March 2022], I did not go as an official representative of the Métis Nation. . . but I was asked by the elders to come and support them.

One elder here in Alberta basically said to me ‘you need to be there with me, I need you by my side when I go to tell my story ’and so I was honored to go there to support our Metis delegation.

How did it impact me personally? [In Rome] we had a session where our little group, the day before we were going to meet with the Pope, we had a session to share stories, some of the horrible stories, things that happened to them.

To hear those people talk about those horrible things the day before and yet when we went and met with the Pope the next day, they still had the faith, they stood there so involved in listening to what Pope Francis had to say and for me that says that they never lost their faith, even with all that happened.

That’s what I took away from that: I witnessed how strong [these survivors] were, how determined they are to continue on in their faith.