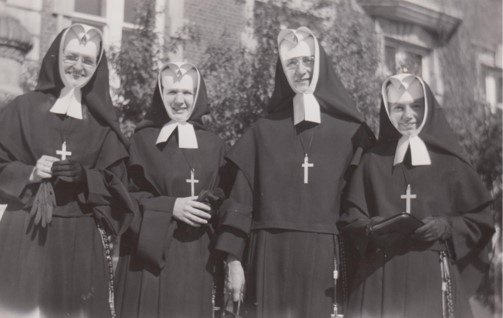 Sister Jeannette Gauttier of the Misericordia Sisters may have been small in stature — at less than five feet tall — but her presence was immense. Though she passed away this summer, the legacy of her work in Edmonton continues to inspire many people.

Sister Jeannette was dedicated to the poor and to unwed mothers. One of her greatest achievements was the creation of Pineview Home for unwed mothers in Edmonton. It opened in 1963 after eight years of government lobbying that saw Sister Jeannette visit the Ministry of Health weekly, requesting they build the home. Each week, her request was denied, but she kept returning until the home was approved.

Her work to help the vulnerable is inspiring, says Lyn Beddoes, a chaplain with Covenant Health.

“She advocated for what she felt was a very strong need,” says Lyn. “[The Sisters] were feisty, amazing women who fought for their cause.”

Jo Ann Molloy, senior operating officer at the Misericordia Community Hospital, says Sister Jeannette was tenacious. “It’s that notion of humility, that loving heart and non-judgment, combined with the pluck to just not give up, even though it’s hard and they keep telling you no, because you know it’s the right thing to do.”

For Bonnie Tejada, director of mission and spirituality at Covenant Health, Sister Jeannette’s powerful actions were inspirational. “It’s through her stories of Pineview that you just see that radical welcome. Her heart was for the girls, ones in this particular situation, for these really young girls who were pregnant. That was the calling she exemplified.”

Sister Jeannette received her calling as a young woman in Massachusetts. Born in New Bedford in 1926 to French-Canadian parents, she moved to Quebec in 1947 when she entered the Misericordia Sisters Community. It was a congregation dedicated to caring for unwed mothers and the poor. She made her temporary vows in 1949 and started studying social work a couple of months later. The year after making her perpetual vows in 1954, she moved to Edmonton.

Bonnie was surprised when she first met Sister Jeannette.

“She had a Bostonian accent! I had just assumed that the French Sisters were all from Quebec. When I visited in Montreal, she seemed delighted to connect with someone from Edmonton to share stories from her time as a young Sister.”

Lyn remembers Sister Jeannette talking about the early days at Pineview when she and her assistant, Sister Andrée David, realized that the girls in their care needed to be transported to medical appointments. Neither Sister knew how to drive. Sister Andrée David agreed to get her driver’s licence, but then they realized that they didn’t have a car.

While out for a walk one day, they met a police officer they knew. They told him about their predicament, and he said he might have a solution. Soon, the officer appeared with a big black car for them. “A limo!” they exclaimed. The car, however, was a hearse. The Sisters accepted the gift and took to driving the Pineview girls to appointments in what they continued to call “the limo.”

Up until the 1960s, Sister Jeannette went by the name Sister Cabrini. At the time she joined the Misericordia Sisters, nuns were given a religious name, that of a saint. Sister Jeannette chose the name of Mother Frances Xavier Cabrini, an Italian-American nun who had been canonized in 1946.

In 1969, the same year Pineview closed, the Misericordia hospital opened in Edmonton. It included an 11-story tower for the school of nursing, which was named Cabrini Centre after Sister Jeannette, who had dedicated 15 years to advocating and caring for people in Edmonton. Today, Villa Caritas is located where Pineview Home once was.

When Lyn heard Sister Jeannette had died on July 25, 2021, at age 95, she felt an urge to keep advocating for the vulnerable. “I think that’s the message that’s really been engrained in me — to carry on the legacy.”

Jo Ann echoes that sentiment. “They’ve been very clear that we are their legacy. They want to ensure we have a good understanding of the charism of the Sisters and that we carry that forward.”