Newly elected Catholic Women’s League president Fran Lucas has a long list of hopes and dreams for Canada’s largest women’s organization, but the most immediate item on her wish list is “to come back to something as close as possible to the normal we once knew.”

“You don’t know what you’ve lost until it’s gone,” said Lucas, an Edmontonian. “I think of attending Mass, visiting with friends, attending a funeral. We’ve missed all that.”

Lucas officially moved up the ladder from president-elect to president on Aug. 10 in a virtual meeting of members of the CWL national executive.

It was a bit subdued, as online meetings tend to be. Her president’s pin arrived in the mail a few days later. “I haven’t worn it yet,” Lucas said.

She’ll get that chance at the first live, in-person meeting of CWL executive members in Winnipeg, Oct. 1. If all goes according to plan, the drive to post-COVID normal will culminate in an Aug. 13-17 national convention open to all 70,000 members in Kelowna, B.C., next year. 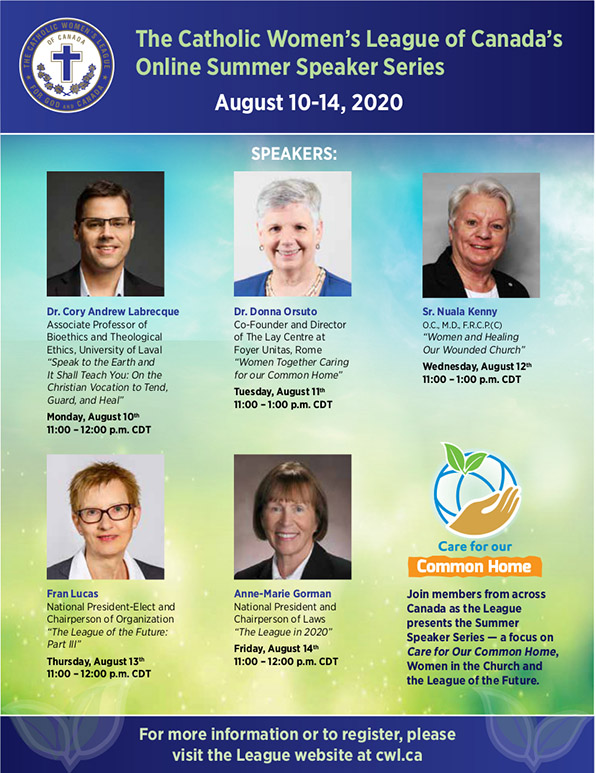 The 2022 CWL theme, “Catholic and Living It,” reflects a desire by CWL members from coast to coast to bring life to their local parish councils and to their parishes, Lucas said.

“I want the CWL impact to be felt in parish communities and beyond,” she said.

Lucas is aware of the hill her organization has to climb. The league has gotten smaller and older over the past two generations.
“Our numbers are going down and we won’t be able to sustain ourselves,” she said. “The executive positions just aren’t filled and it gets harder on our members.”

As the former manager of volunteer services for Edmonton Northlands, a not-for-profit that supports agriculture and small town life in northern Alberta, Lucas knows revitalizing the CWL means supporting women in their roles on parish councils.

“I hope we attract more women and give them the appropriate training, to give them the confidence and skills to say yes when a (CWL) election rolls around,” she said.

Lucas is also certain that a revitalization of the League will have to be based on a solid base of spiritual maturity.

“One thing we want to do when we meet in October is, I’ve asked for a retreat with the women,” she said. “So that we can get off to a really strong start.”