The number of hate crimes motivated by religion are down, according to the latest statistics, but that doesn’t bring much comfort to those who are targeted.

Overall, hate crimes abated slightly in 2018, with a 13-per-cent drop in police-reported incidents, according to Statistics Canada. That follows a spike in 2017 and a dramatic rise in hate crime over four years between 2014 and 2017. However, in 2018 Canada still chalked up its second highest hate crime statistics on record.

Religion is a significant motivator, with 36 per cent of 2018 hate crimes directed at religious targets. That’s down from 41 per cent in 2017.

The latest hate crime statistics from Statistics Canada show Jews are the most targeted group in the country, singled out in nearly one-fifth (19 per cent) of all Canadian hate crimes in 2018 despite representing less than one per cent of the population.

Meanwhile, Muslims saw a dramatic 50-per-cent decrease in hate crime incidents in 2018, after hitting a record high of 349 attacks in 2017. Catholics were hit by haters just two per cent of the time, despite constituting 38 per cent of Canada’s population.

Anti-Jewish hate has been a long-standing fact of life for Jews in Canada and around the world, said Richard Marceau of the Centre for Israel and Jewish Affairs.

It persists despite the major turnaround in official Catholic teaching and attitudes following the Second World War and the Holocaust, said CIJA’s general counsel and vice president for external affairs.

“Catholics, both formally and informally, have made serious and significant efforts to atone for past anti-Semitism. We maintain very warm and constructive relations with the Catholic community in Canada,” Marceau said in an e-mail.

Changes in Christian attitudes and official Church teaching don’t have much effect on the irrational, incoherent “virus” of anti-Jewish prejudice, he said.

“We want Catholic Canadians to keep developing close relationships with Jewish Canadians and to call out anti-Semitism when they hear and see it,” said Marceau.

For Muslims, attacks are more likely to be violent and more likely to target women. Nearly half (45 per cent) of Muslims who suffered violent attacks were female, compared to just 32 per cent of all violent hate crime victims who were female.

It isn’t all graffiti and anonymous Internet posts. Four in every 10 hate crimes in 2018 were violent or potentially violent, including everything from uttering threats and criminal harassment to assaults. Hate crime assaults were up six per cent in 2018.

Hate crimes based on race or ethnicity accounted for 44 per cent of a total 1,798 incidents in 2018. There were 173 hate crimes tied to sexual orientation, 10 per cent of the total. 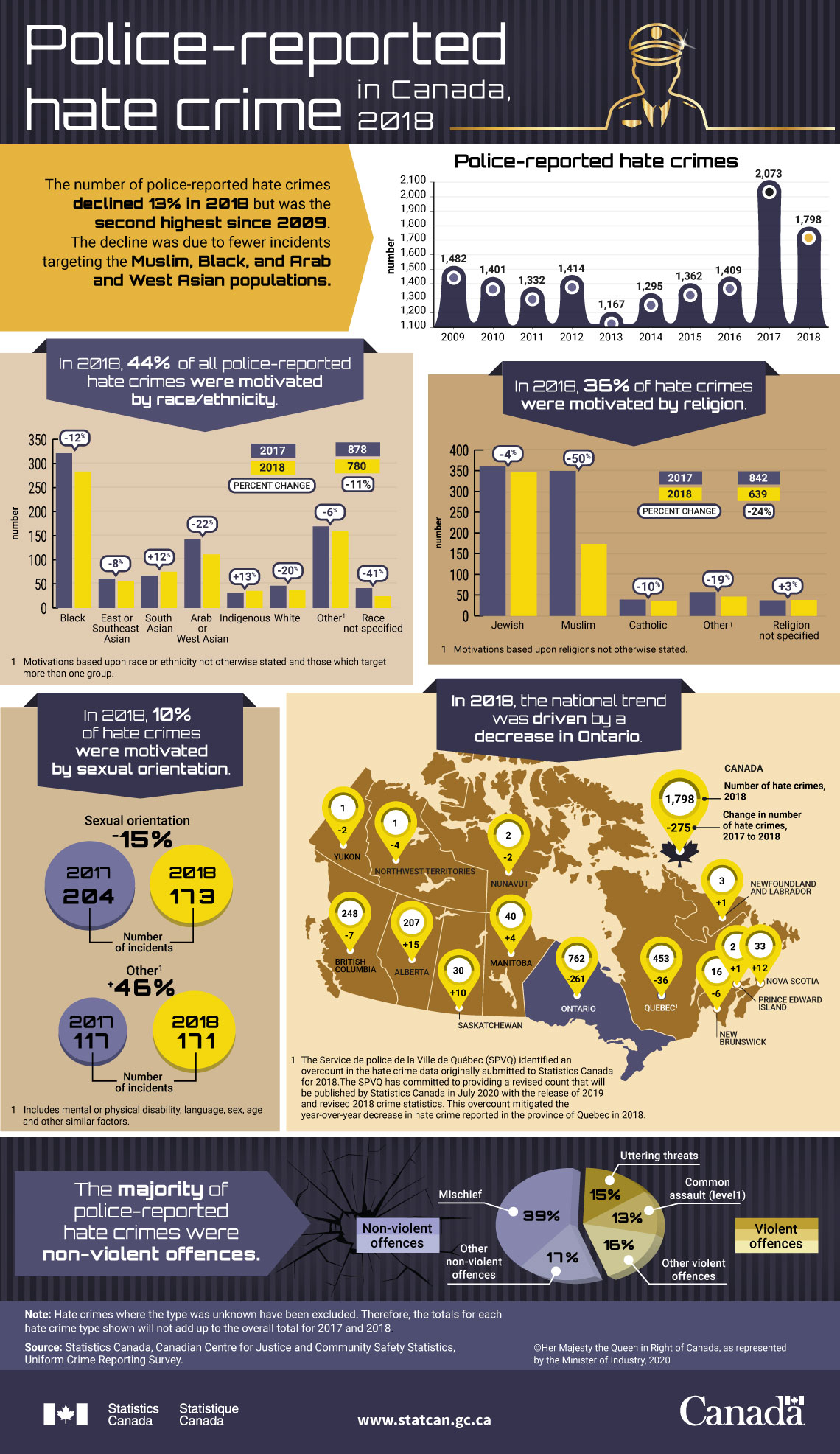