Vancouver mom Bonnie Way has long been inspired by the Canadian Martyrs, eight Jesuit missionaries who in the 1600s gave their lives to preach the good news to North America’s Indigenous peoples.

But the homeschooling mother of five found there were few resources available to introduce the Canadian martyrs (also known as the North American martyrs) to children. 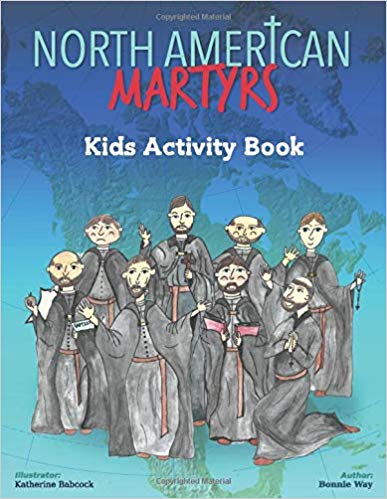 So, Way took it into her own hands. The first-time author published the North American Martyrs Kids Activity Book, the culmination of a year’s work.

“There’s nothing like this for families for teaching our kids about the saints,” said Way.

The activity book, intended for children aged seven and up, tells the stories of all eight martyrs alongside colouring pages, word searches, and even a “decoding” challenge to introduce the idea that the missionaries had to learn First Nations languages to properly preach the Gospel. St. Jean de Brebeuf, the “Apostle of the Hurons,” is credited for writing the first dictionary of the Huron language.

“Often we think saints are superheroes with some secret power or special ability we don’t have. That’s not true,” said Way. “They were ordinary men.”

For example, St. Noel Chabanel had a difficult time adjusting to the languages and customs of the Huron communities he served. Meanwhile, Saints Gabriel Lalemant and Rene Goupil embraced the mission field even though both had poor health and St. Goupil was deaf.

“If they can love like that, I can love my kids, love my family, my neighbours like that,” said Way.

All eight men were eventually killed for their faith. Martyrdom can be a difficult subject to raise with children, and the Canadian martyrs serving the Huron people certainly suffered gruesome torture and death, often at the hands of warring Mohawk tribes. Way raises the subject delicately.

“Both St. Rene and St. Isaac were killed with a tomahawk to the head. I say they were killed,” she said. “If the kids want to ask questions, their parents can talk about it with them.”

She hopes the book will inspire homeschooling and non-homeschooling families alike to learn more about Catholic history and Canadian saints.

Way, who has a bachelor’s degree  in writing from the University of Victoria, was a “voracious reader” as a child and dreamed about publishing her own works since her teen years. “This is something I’ve been planning to do for 20 years, I just never thought it would be a kids’ saint book.”

She also writes about marriage, motherhood, and homeschooling on her blog, The Koala Mom.

The feast of the North American Martyrs is celebrated Sept. 26 in Canada.