The number of executions worldwide has dropped by almost one-third, Amnesty International said in its latest review of the death penalty.

At least 690 people were executed globally in 20 countries in 2018, compared to 993 in the previous year, the organization said in the report released April 10.

The statistics assess the use of the death penalty worldwide except in China, where the number of people executed each year is a state secret.

The figures “show that the death penalty is firmly in decline, and that effective steps are being taken across the world to end the use of this cruel and inhuman punishment,” it said.

While “global consensus is building towards ending the use” of the death penalty, “with more than 19,000 people still languishing on death row worldwide, the struggle is far from over,” the organization said.

Last August, Pope Francis ordered a revision of the Catechism of the Catholic Church, which now says that “the Church teaches, in the light of the Gospel, that ‘the death penalty is inadmissible because it is an attack on the inviolability and dignity of the person,’ and she works with determination for its abolition worldwide.”

The death penalty is a cruel violation of the basic right to life and robs people of the chance to repent and make amends for the crimes they have committed, the pope said in a video message to participants at the World Congress Against the Death Penalty Feb. 27. 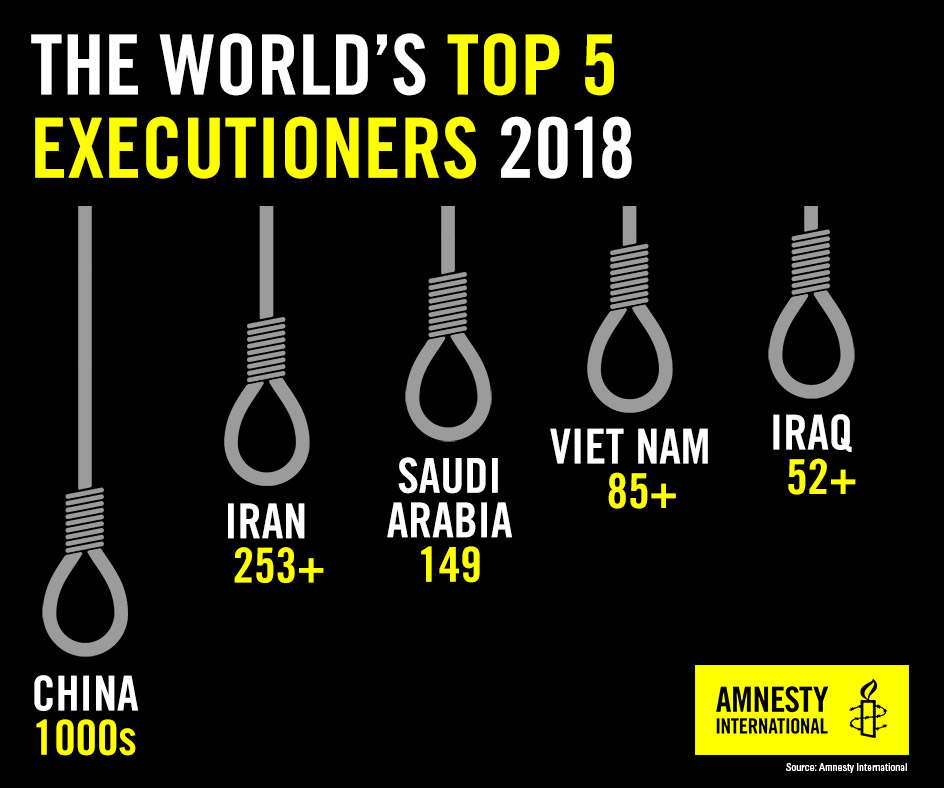 The Amnesty International report said while “thousands of people are sentenced to death and executed each year” in China, 78 percent of all reported executions in 2018 took place in just four countries — Iran, Saudi Arabia, Vietnam and Iraq.

Also last year, Washington became the 20th U.S. state to outlaw capital punishment when a court banned it. The state’s Catholic bishops applauded the October ruling that its use is arbitrary and racially biased.

However, some countries saw a rise in executions last year, including the United States, Belarus, Japan, Singapore and South Sudan, the organization said. Also, Thailand carried out its first execution since 2009.

Sri Lanka announced it would resume executions after more than 40 years, and an ad seeking hangmen was placed in a state-run daily newspaper.

Also, there was a steep rise in the number of death sentences imposed in some countries, including Iraq and Egypt, Amnesty International said. It noted that Egyptian authorities impose mass death sentences “after grossly unfair trials.”

Last December, Pope Francis said countries that have not abolished capital punishment but have adopted a moratorium on executions also should ban the death penalty as a possible punishment for crime.

A temporary moratorium “cannot be lived by the condemned person as a mere prolongation of the waiting period for his or her execution,” he said.