The pioneering and adventurous spirit of the Sisters of Providence resonated with Sister Rezebeth Noceja when she first met some of the Sisters in 2015. She sensed a connection even before she arrived for her first visit to Providence Centre.

“When the vocation director answered my e-mail I felt something very strange,” she remembers. “It was a blissful joy that felt like, I have finally found what I am looking for.”

That sense of belonging only increased as she returned for several more visits that year, and experienced life with the Sisters in both Edmonton and Calgary.

“I felt so much peace,” she recalls. “I experienced a very warm welcome from the Sisters. I felt a tinge of fear at the level of comfort that I was slowly settling into, and that is because I knew it would eventually change my life.” 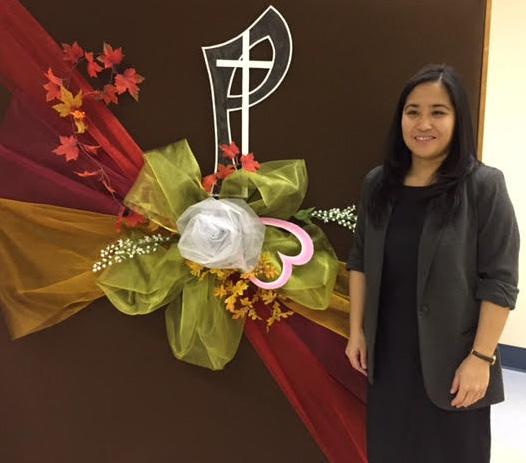 Sister Rezebeth came to Canada from the Philippines in 2008, and was working in Fort McMurray when she sensed God calling her to consider taking a very different path.

This came as a surprise.

“Faith was very much a part of my growing up years, (but) no one in the family had ever been a priest or religious, so it was not discussed when we were growing up,” she explains.

Although the call she was sensing was to something totally unfamiliar, Sister Rezebeth took a leap of faith and began to explore religious life. Several friends advised her to start contacting and visiting communities of Sisters. One friend suggested the Sisters of Providence.

“Each time (I visited), I felt more and more at home with the community,” Sister Rezebeth shares. “I decided to move from Fort McMurray to Edmonton to live at the  Providence Centre on May 12, 2016, a few days after the horrific fire in Fort McMurray. Then, I entered on December 18 of the same year, as a candidate.”

After spending time living with the community as a candidate, Sister Rezebeth became a novice, entering an intense time of preparation for the eventual profession of vows. As a novice, her life is a balance of learning from the professed sisters, prayer, and ministry. This includes working with the inmates at the Edmonton Remand Centre for several hours each week.

The Sisters of Providence were founded in Montreal. The community’s foundress, Blessed Émilie Gamelin, gathered like-minded women around her to begin the congregation in 1843.

They ministered to people with a diversity of needs, working as nurses, teachers, caregivers, and being the hands and feet of Christ wherever the need was greatest.

Eventually, as some of these services began to be provided by government organizations, the Sisters diversified their ministries, taking on new roles as chaplains, spiritual directors, retreat facilitators, and more, while continuing direct service to the needy. The community spread across Canada, and eventually to the United States, El Salvador, Haiti, Chile, Argentina, the Philippines, Egypt, and Cameroon.

The Sisters celebrated the 175th anniversary of the founding of their community on Oct. 14, 2018, at a Mass celebrated by Edmonton Archbishop Richard Smith at the Providence Centre.  He also wrote about the Sisters of Providence in his blog.

Sister Rezebeth is proud to enter into a legacy that spans more than a century and a half.

“The spirit of the Sisters found resonance in me,” she explains. “My relationship with God has become deeper since I entered. It has its ups and downs. And honestly, it is after those rough patches that I feel He is closer to me. That’s how personal it is for me.”

Sister Rezebeth encourages young women who are exploring a possible religious vocation to reach out to Sisters, and talk with them about their vocation.

“Talking to Sisters about their life will help a lot,” she advises. “And lots of prayer!”