This “good and righteous man” offers us a beautiful witness. He sets out on a course of life together with Mary. While engaged to her, he learns that she is with child. Knowing that he is not the father, he draws what would be for any of us the obvious conclusion. He decides on a course correction and determines to “dismiss her quietly”. However, God reaches out and summons him to correct the correction. Through the message of an angel, who appears to Joseph in a dream, God calls him to stay the course, as it were, and take Mary as his wife. Yet through this call God also announces that there is, indeed a course correction about to happen, one that will impact not only the direction of Joseph’s life but also the trajectory of history itself. The child, Joseph is told, has been conceived in Mary by the Holy Spirit and will save the world from its sins. In other words, the course of sin on which humanity had been launched by the disobedience of Adam and Eve is about to be corrected – indeed, radically re-directed – toward salvation. Joseph could not have fully understood what all this meant and how God’s plan would unfold. However, he trusted God and placed his faith in the ability of God to do all that he promised. In consequence, Joseph surrendered to the role he was called to play in the accomplishment of the loving and merciful course correction that would happen through the child now entrusted to his care. 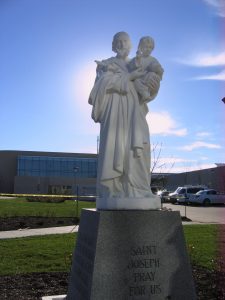 What course corrections do we need? Do the directions we have set for our lives need to be changed? We achieve clarity answering these queries when we pose the question thus: are we moving away from or toward Jesus and his Church? That’s the issue in a nutshell. We engage the question with particular seriousness in the season of Lent, yet it is perennially urgent. Living apart from the grace of Jesus Christ is to be following a course that leads to perdition. That is what it means to say that Jesus is the world’s one and only Saviour. So, repentance and conversion mean surrendering to whatever course correction is necessary to begin walking with the Lord in the obedience of faith. Let’s not hesitate to turn to our patron, St. Joseph, and ask him to pray that the needed re-direction of our lives will take place.

He is also the patron of Canada. Let us ask him to intercede for our beloved country also, since it is manifestly in need of a serious course correction. This necessity has been on display for quite some time in for example the decisions of both Parliament and the courts to allow unlimited access to abortion, to change the definition of marriage, and to legalize assisted suicide and euthanasia. In recent months, we are witnessing the country’s trajectory move – with alarming speed – in the direction of steamrolling over Charter rights, in particular that of freedom of religion and liberty of conscience. Just consider the moves in Ontario to force doctors to give effective referrals for practices that run counter to their conscience, or the intractable insistence of the federal government to link the granting of summer grants to the forced attestation of agreement to what it mistakenly claims is the “right” to abortion. A parishioner recently asked me, with obvious anguish, “When am I going to get my country back?” When, indeed? In our nation, which is supposed to be a liberal democracy, the State is leading us in a decidedly illiberal direction. The needed course correction cannot happen soon enough.

Good St. Joseph, pray for us! Lead us by your prayers to the setting of our lives on the right course.