It’s a practice as old as time, and though it never went away, it’s making a ‘comeback’ of sorts.

The Grey Nuns Community Hospital is the largest full-service hospital in Canada, and only one of less than 200 worldwide, to receive a “Baby-Friendly” designation by the World Health Organization and the Breastfeeding Committee for Canada.

The Grey Nuns received its official designation on Dec. 13. The Misericordia Community Hospital and the Bonnyville Health Centre are also in their final stages of completing their accreditation. It’s part of an international initiative to protect, promote and support breastfeeding as a choice for mothers.

“It has been re-energized as the best, safest way to feed your baby,” said Margaret Salopek, a clinical nurse educator with the Grey Nuns Hospital. “Mothers have a choice. 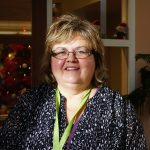 The best thing you can do is provide them with information that they can make an informed choice.”

To receive this, the hospital had to implement 10 steps that all work towards supporting new mothers with breastfeeding, including 20 hours of staff education and training  –  from doctors and nurses to the housekeeping staff, who can direct mothers to the third-floor lounge where they can breastfeed in private if they wish.

Even before her daughter was born, Melanie Borys knew that she would try to breastfeed her baby as much as she could. When she heard about the health benefits, there was no question.

“It was reinforced after I heard about all the health benefits of momma’s milk for baby, that solidified our choice,” said Borys, who had her daughter Katerina at the Grey Nuns six months ago.

“The baby gets all the momma’s antibodies and it helps their immune system right off the bat because the babies are susceptible to illness. With that extra boost she can help fight that off, and get the nutrients from the milk.”

Salopek said research shows that the colostrum in breast milk has many health benefits. “It’s like baby’s first immunization, without the needle.”

Covenant Health says the Baby-Friendly designation is a strong step towards better care and support for all mothers, and that breastfeeding has a number of benefits, including long-term protection from illness, faster healing after delivery and bonding between mother and baby.

“I noticed it helped calm her down with her anxieties, and me as well, to create that bond between us and calm us both down,” Borys said. “And learning then her cues, because they don’t have a little manual. They don’t know how to speak yet and articulate what they want. The other part of this initiative is to learn your baby and what he or she needs.”

Salopek said that skin-to-skin contact also releases the hormone oxycontin that calms both the mother and the baby. “When they are in skin to skin, their heart rates go down, the blood sugar stabilizes, their respirations slows down and they are just like ‘Aah’, just peaceful.”

Salopek does note that breastfeeding is a “learned behaviour” for both mother and the baby, and it may take some time, just like it did for Melanie Borys.

“You kind of see pictures and diagrams and you’re like ‘Well it can’t be that bad’,” Borys said. “After she was born, the nurses were so compassionate, so helpful. So loving and caring to both Katerina and I to show us how to breastfeed and how to get a proper latch. Katerina had a tendency to roll her lips so we had to figure out how to keep her lip down and get a proper latch. Once she figured it out, it was really easy. She’s doing really well.”

Salopek said breastfeeding is especially important in developing countries, and in disaster situations, such as the fires in Fort McMurray in 2016. In those cases, the electricity, sterile water and heat needed to prepare infant formula may not be available.

In some cases, mothers can’t or prefer not to breast feed, so they use infant formula instead. Salopek said the Grey Nuns Hospital will continue to respect the choice of mothers. “They’re still going to make the best decision for them and their family because that’s what they do.”

Nevertheless, the Baby-Friendly designation is about keeping mothers informed so they can make the best individual choice  – and Salopek sees it as part of the mission of Grey Nuns staff.

“I’ve got to be a good steward to make sure things that we started in this world are left in better condition when we leave it, and that people have the best start possible.”