In the Christian’s journey of faith and conversion, there are moments of profound encounter with the Lord. They are often referred to as “mountaintop experiences.” Well, we had two collective ones today, literally!

The day opened with our ascent to the top of Mount Tabor, site of the Transfiguration of Jesus in the presence of Moses and Elijah, and witnessed by the apostles Peter, James and John. There, in the beautiful Basilica, surrounded by mosaics depicting the event, we celebrated Eucharist using the prayers for the liturgical feast of the Transfiguration. (Even though today is the First Sunday of Advent, we could do this since at the holy places permission is granted to celebrate the mass associated with the event commemorated by the site.)

Just as we were gathering for the Eucharist our attention was drawn to a mosaic Latin inscription that conveys the words spoken by St Peter: “Lord, it is good for us to be here!”

Indeed. That exclamation pretty well sums up the sentiments of our heart, not only on Mount Tabor but as we find ourselves at every place associated with Our Lord and his Blessed Mother. The Gospel passage (Matthew 17:1-13) recalled the voice of the Heavenly Father confirming the identity of Jesus as his well-beloved Son, and commanding us: “Listen to him!” This focused our reflections upon the many voices that compete today for our attention, many of which seek to seduce us away from Christ and thus lead us down wrong paths, sometimes dark and dangerous. We prayed for the grace to discern and listen to the voice of Jesus, since he alone speaks “the words of everlasting life” (John 6:68).

We then went west across the country to Mount Carmel. On this holy mountain, the prophet Elijah is commemorated. At the city of Haifa, we ascended to the summit of the mountain to Stella Maris monastery. A Carmelite site, dating back to the origins of the Carmelite order in the twelfth century, its church has the main altar built over the cave in which the great prophet lived for some time. Leaving there we went across the range to the place on the mountain associated with Elijah’s destruction of the prophets of the false god, Baal.

Reading and praying the narrative (cf. 1Kings 18: 20-40) gave us pause. Our attention was drawn to two aspects of the event. First, we reflected upon the grievous sin of idolatry, likened by the prophets to adultery in order to underscore its gravity. What are the idols in my own life? How am I being called to return to right worship of the Living and True God? What false prophetic voices influence me to turn away from God’s covenant love?

Second, we pondered silence. Striking in the narrative is the silence with which the false prophets were greeted as they cried out to Baal; silence, because there was no one there to answer, nothing. It was the silence of emptiness. In this kind of silence, we find a key to understanding the noise of our current culture, the babble and banality that daily surround us. The cacophony covers over a truth that many fear, namely, that reliance upon the false gods of our day is dependence what is not there, what cannot answer because it is no more than an illusion. By way of dramatic contrast is the silence filled with the presence of God. 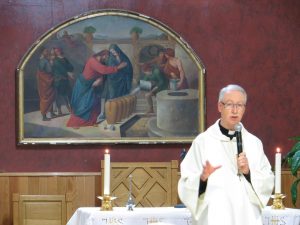 This, too, is taught to us by an episode in the life of Elijah, not on Mount Carmel but far to the south on another height, Mount Horeb. There the prophet encountered the Lord in the “sound of sheer silence.” (cf. 1Kings 19: 11-13) We, who are called to listen to the voice of Jesus Christ, must learn to cultivate, with the help of grace, a space for silence that we allow to be filled not with false idols but with the One who alone is God.

On our way from here back to our hotel in Tiberias, we pulled into Cana, the place of Christ’s self-manifestation at a wedding feast. Here we gave thanks to God for the gift of marriage.

Even though our secularizing culture seems to have less and less appreciation for it, marriage will always be the object of the Church’s esteem. As Christ made himself known at Cana through a miracle of transformation, changing water into wine, so, too, does he in marriage manifest himself in the miracle of transformation by which man and woman become one flesh in the eyes of God. Husband and wife, by their assuming of the indissoluble bond, their exclusive and unconditional love for each other and by their openness to the gift of children, serve as a sign within the Church and before the world of the love of Christ for the Church and world. This is something worthy of our greatest respect. At this site, the married couples in our group renewed their marriage vows. This may have taken place on the level ground of Cana, but I think it was for them the third “mountaintop experience” of the day.

Tomorrow we leave Galilee and head south into the Judaean wilderness. 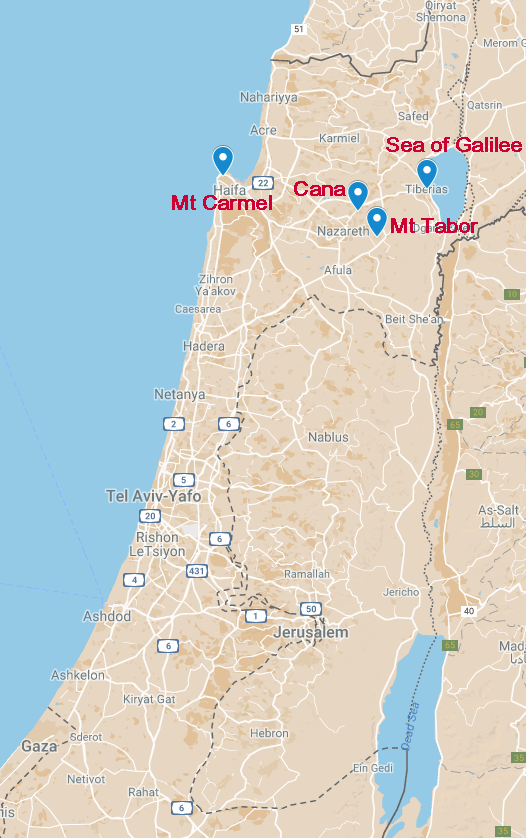