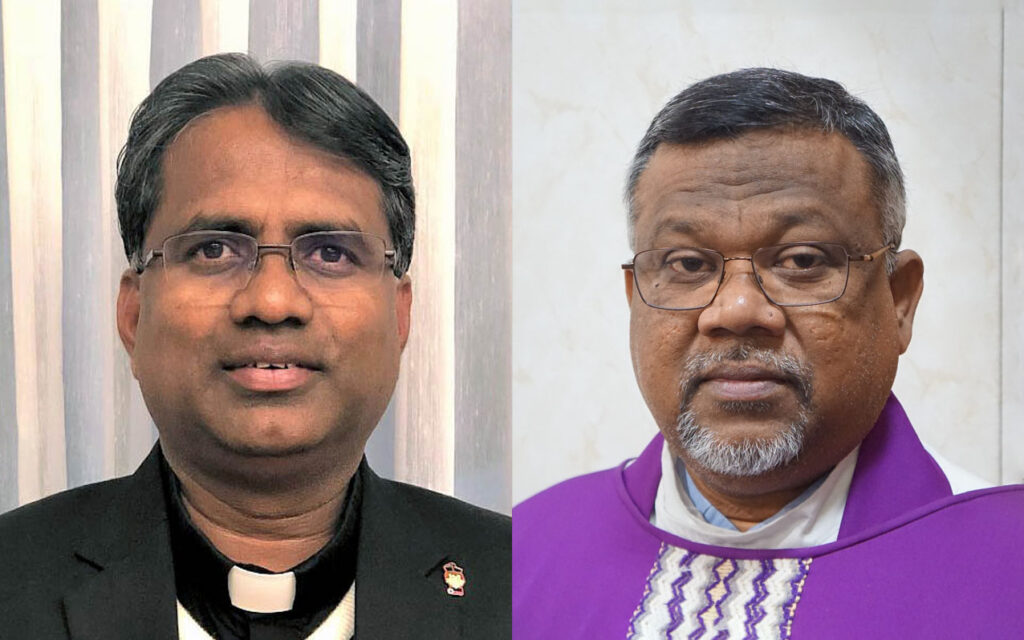 Two pastors in Edmonton, and a former pastor, are among the Salesians priests marking milestone anniversaries as priests.

Father Adaikala Raja John, SDB, pastor of St. John Bosco Church in Edmonton and treasurer of the Salesian community in Edmonton, has been a priest for 25 years. A native of Tamil Nadu State in India, he was born in 1968 and entered the Salesians in that country in 1984. He made his first profession in 1986 in India and also studied theology there. He was ordained on December 29, 1997, at Palayamkottai, India. He holds a PhD in sociology, having written his thesis on rural Dalit youths. After years of pastoral ministry in his province of Chennai (formerly Madras), he came to Canada in 2016 for parish ministry in Edmonton.

Father Sathiaseelan (Sathia) Kulandaisamy, SDB, pastor of St. Matthew Church in Edmonton, has been a priest for 25 years. He was born in Tamil Nadu State, India, in 1968, entered the Salesians in 1985, and made his first profession in 1987 in India. He was ordained at Madurai, India, on December 30, 1997, and filled various responsibilities, chiefly in schools, in his province of Chennai (Madras) before coming to Edmonton in 2018 to serve as a parish priest.

Since 2006 has been director of the Salesians’ mission office in Montreal and is currently also director of the Salesian community there. Fr. Lantagne comes from Sherbrooke, Que., where he was born in 1951. He entered the Salesians there in 1971 and made his first profession at Newton, N.J., on Sept. 1, 1972. He studied theology in Turin and Columbus and was ordained in 1984 at Rock Forest, Que. He taught high school for seven years in Sherbrooke and was a parish priest in Montreal for three years.

On Oct. 15, the Salesian Province of New Rochelle honoured 21 confreres who have accumulated 1,045 years of religious profession or priestly ordination. The Eucharistic celebration took place at the Marian Shrine chapel in Haverstraw, N,Y. with the provincial, Father Timothy Zak, SDB, presiding and preaching and more than 200 Salesians, Salesian sisters, family members, and friends of the jubilarians participating.

Father Zak’s homily highlighted the jubilarians’ witness to the Easter life of Christ in manners similar to what St. Artemides Zatti did; a Salesian brother who served the sick in Argentina for over 40 years, he was canonized on Oct. 9.

Among the jubilarians were 17 priests and four brothers. Twelve of the 21 were present in person. Ten jubilarians and 24 other priests concelebrated.