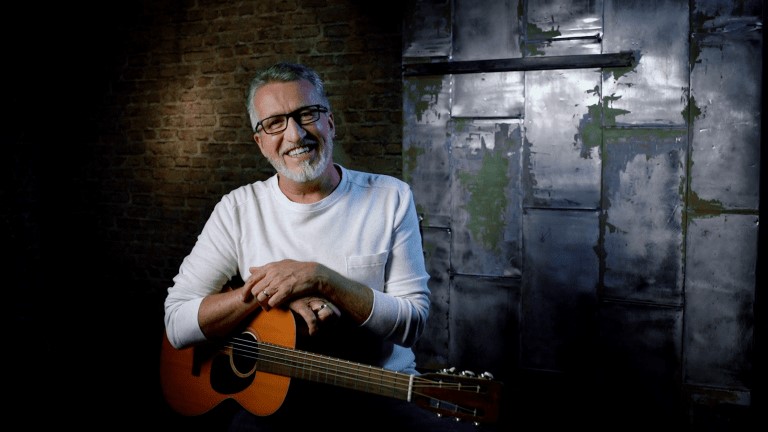 Juno award-winning singer-songwriter Steve Bell has recorded 21 albums of music over his career, which started when a Catholic priest gave him $10,000 to record his first album of Christian music.

Raised as a Baptist with Evangelical roots, Steve has spent the past 20 years within the Anglican church. Steve is currently on a cross-Canada tour.  Corpus Christi parish in Edmonton hosted Steve for an evening of music on Dec. 4. Prior to his concert, we had a chance to speak with Steve about his career, his music and his connection to Catholicism.

Why is touring and sharing your music with the world so important to your calling as a Christian?

You know, I get to watch people respond to the music, night after night, from stage and lights come on and people make connections and healing happens. And I quite quickly realized that it’s not my cleverness or my wisdom, it’s something about this particular gift of music that does those things.

Someone said to me, “Your music is the way that God loves the world through you.” I can see that, people absorbing God’s love through this music.

What would you say is the role of the artist within the Church and Christianity?

I think it’s profound. I mean, think about it. It’s not a recommendation. It’s a command. The Bible declares to us, “Sing! Sing praises to God!”

Timothy Keller, who is a New York preacher – and I don’t necessarily stand by everything he says – but he asks “How do we bridge the gap between Christian faith and Christian character? What are the things that move us from the head, to the heart and into the body, so that the whole person becomes absorbed in Christ?”

Music is one of the things that do that. So I don’t think that we take music too seriously; it’s that we don’t take music seriously enough.

I liken it to the gift of tongues – and I don’t have that gift – but using the gift of melody, I can say things that words alone cannot say. And therefore I believe that artists have been given a unique language from God and it is our duty to speak it.

How did your first Christian album come about?

I had a dear friend – Father McDougall – a Jesuit from Manitoba and he used to be a prison chaplain with my Dad, who was the Protestant chaplain. He always loved my music and encouraged me.

I lost contact with him as a young adult and I spent about 10 years playing music in the night clubs. And when I got out of that, I really had no vision for where to go, nothing like what I am doing now. It had not occurred to me to be a Christian artist.

One day Father McDougall shows up again in Manitoba and gives me a call and asks me what I’m doing and he says “I hear you quit the bars.” And he says, “You know, you should do a Christian album, an album of spiritual music.”

I said no initially and I knew I couldn’t afford it. I said it would cost me about $10,000  to produce an album – which was a pretty modest amount at that time – and then he just goes and pulls out his cheque book and writes me a cheque for $10,000. I could cry just thinking about it.

I had no idea that that cheque would launch a whole adult vocational career and 21 albums. It’s quite miraculous, actually.

How has your music and your touring been a bridge between denominations?

Well for one, my father was a Baptist minister. Father McDougall came to my Dad one day and asked if someone could play music at his Catholic parish, since they couldn’t find anyone. So I started going to these Masses. And I’d never seen anything like it. All the standing up and sitting down and bell ringing, but I loved Father McDougall so I kept coming.

And then I start to notice over time that I started to look forward to certain moments [in the Mass]. You know the moment when the bell is rung, the consecration? And I started to notice that whenever that bell rang, something in my heart would jump for joy! I almost felt like Mary greeting Elizabeth.

I started to notice more moments within the liturgy that really thrilled me. So when I started to create the music that I am known for now, most of the sources were Catholic sources. For instance, my writing from Isaiah 6, “Holy holy Lord God of might,” that’s one of my favourite songs.

I used to ask my Dad, “How do you know what you should be when you grow up?” He used to say, “Find someone you really admire and ask yourself, ‘What did they do to get there?’ And then do that.”

I started to realize that who I admired was St. John of the Cross, St. Teresa of Avila, St. Francis, Mother Teresa and I started really attending to their lives. I sensed a kinship with them, which surprised me as a Baptist – because we don’t do that!

So I do see people opening up to different traditions through music, including myself.

Your latest album is entitled Wouldn’t You Love To Know. What is the particular of gift that you hope to give to the world through this album?

The album is inspired by the Anglican theologian N.T. Wright who speaks about epistemology – how we really come to know things, not in terms of factual knowledge, but how you come to know the essence of something. It breaks it down. You can’t know anything that you don’t first love.

So N.T. Wright is making this point: We will never know what we don’t first love, which inspired the line “Wouldn’t you love to know?”

During Advent, how can sacred music draw us deeper into the season and help prepare us for Christ at Christmas?

Advent, as a liturgical season, more than any of the other seasons, speaks to me. And what speaks to me about it is the deep maternity of it. The central person, of course, is Mary, who receives (God) into her womb and she nurtures it and carries it and she bears it forth to the world.

My calling is that as well. I have been created to “house heaven” and to love that seed and protect it and to bear it and to grow it and anything less is beneath my dignity as a human being.