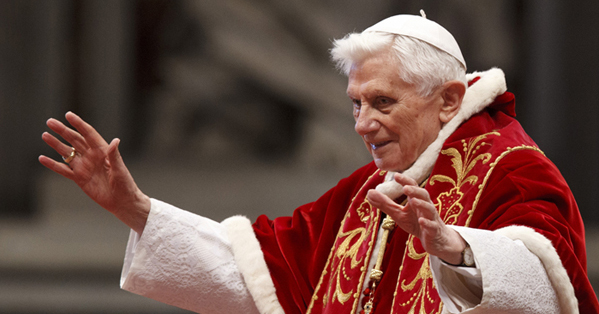 The Archdiocese of Edmonton joins the world in mourning the death of Pope Emeritus Benedict XVI.

“Together with the People of God in the Archdiocese of Edmonton, I mourn the death of Pope Emeritus Benedict XVI. We give profound thanks to God for the gift that this humble servant of the Lord has been to the Church and world,” Archbishop Richard Smith said in a statement.

“In accord with his episcopal motto, cooperatores veritatis, Benedict XVI dedicated his life to living in and serving the truth, who is a person: Jesus Christ. A model disciple and gifted teacher, he leaves as his legacy both a personal example of loving fidelity to the Lord and a corpus of writings that offers sure guidance for Christian living. May the merciful Lord now grant to this good and faithful servant eternal peace and joy.”

Pope Benedict’s funeral will be held Jan. 5, 2023 at 9:30 am. (Rome time). Pope Francis will preside at the funeral Mass. Pope Benedict’s body will lie in state at St. Peter’s Basilica starting Jan. 2. He had asked that things be as simple as possible for his funeral arrangements.

Joseph Ratzinger (Pope Benedict XVI) was born on April 16, 1927 in Marktl am Inn, Germany.
His father, a police officer, came from a traditional family of farmers from Lower Bavaria. He spent his adolescent years in Traunstein, a small town on the Austrian border.

It was in this context, which Pope Benedict XVI himself has described as “Mozartian”, that he received his Christian, human and cultural formation.

Joseph’s days of youth were far from easy.

His faith and family upbringing prepared him for the harsh experience of the problems connected with the Nazi regime; he even remembers seeing his parish priest being beaten by Nazis before celebrating Holy Mass, and was well aware of the fiercely hostile atmosphere to the Catholic Church that existed in Germany at the time.

Towards the end of the Second World War, Joseph was enrolled in the auxiliary anti-aircraft service.

From 1946 to 1951, he studied philosophy and theology at the University of Munich and at the higher school in Freising. Together with his brother Georg, he was ordained a priest on June 29, 1951 in the Cathedral at Freising.

In 1953, Father Ratzinger obtained a doctorate in theology with a thesis entitled: The People and House of God in St Augustine’s doctrine of the Church.

Four years later, he qualified as a university professor. He then taught dogma and fundamental theology at the higher school of philosophy and theology of Freising; then in Bonn from 1959 to 1969; in Münster from 1963 to 1966; and in Tübingen from 1966 to 1969.

Beginning in 1969, he was a professor of dogmatic theology and of the history of dogma at the University of Regensburg, where he eventually became Dean and Vice-Rector.

From 1962 to 1965 he was present during all four sessions of the Second Vatican Council as a chief theological advisor to the Archbishop of Cologne, Cardinal Josef Frings.

Father Ratzinger’s important and useful experience as a priest and an “expert” at the Second Vatican Council was immensely valuable and fundamental to his life. He lived out this experience as confirmation of his own vocation, which he defined as “theological”.

The rapid succession of his numerous, detailed publications has also continued as the years have passed, serving as a reference point for Catholics and especially for those involved in advanced theological studies.

He was ordained a Bishop on May 28 that same year and was the first diocesan priest in 80 years to take on the pastoral governance of this large Bavarian Diocese. He chose as his episcopal motto: “Fellow Worker in the Truth” (cf. III Jn 1: 8).

He was created and proclaimed Cardinal by Pope Paul VI in the Consistory of 27 June 1977.

On November 25, 1981 he was appointed by Pope John Paul II as Prefect of the Congregation for the Doctrine of the Faith. He also became President of the Biblical Commission and of the Pontifical International Theological Commission.

On February 15, 1982, he resigned his pastoral office as Archbishop of Munich and Freising.

His role as President of the Commission for Drafting the Catechism of the Catholic Church and the six years of intense work (1986-92) behind its preparation are one of his many outstanding achievements.

As Dean of the College of Cardinals he presided over the College’s deliberations during the Vacancy of the Holy See following the death of Pope John Paul II on April 2, 2005.

On April 8, Cardinal Ratzinger presided at Holy Mass in St Peter’s Square for the funeral of Pope John Paul II.

On April 19, Cardinal Joseph Ratzinger was elected the 265th Pontiff of the Roman Catholic Church, selecting the name Benedict XVI.

On February 11, 2013, Benedict unexpectedly announced his resignation in a speech in Latin before the cardinals, citing a “lack of strength of mind and body” due to his advanced age. His resignation became effective on February 28, 2013. He is the first pope to resign since Gregory XII in 1415, and the first to do so on his own initiative since Celestine V in 1294.

He was succeeded by Pope Francis on March 13, 2013, and he moved into the Mater Ecclesiae Monastery in the Vatican for his retirement on 2 May 2013.

On September 4, 2020, Benedict became the longest-lived person to have held the office of pope, surpassing Pope Leo XIII, who died in 1903. Benedict is the last surviving individual to have been created a cardinal by Pope Paul VI.