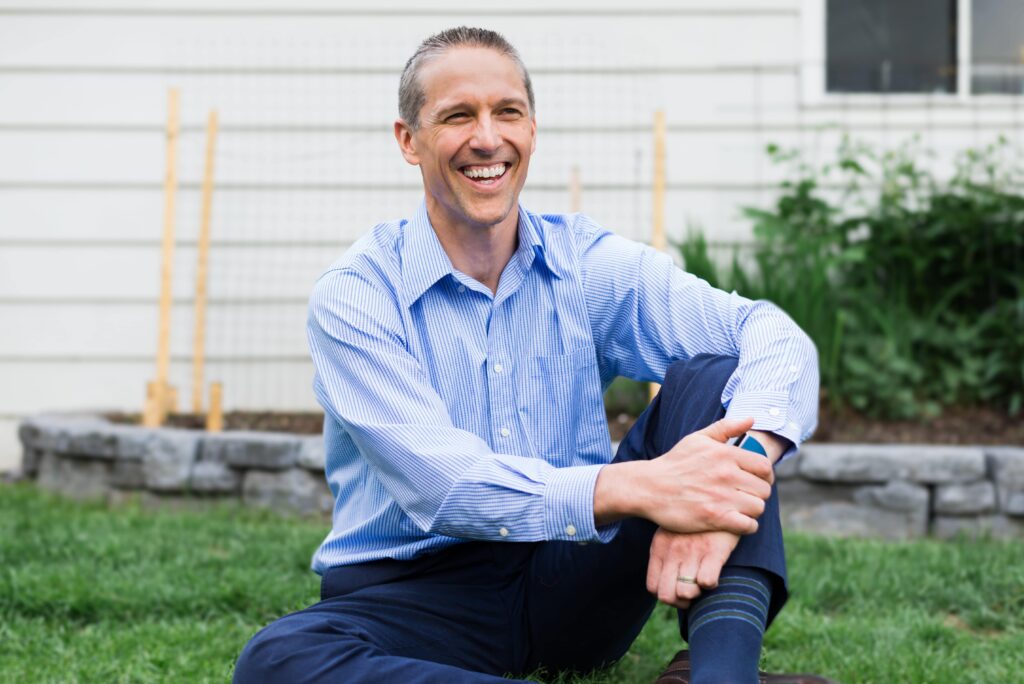 Matt Hoven’s book, On the Eighth Day: A Catholic Theology of Sport, was co-written with two PhD colleagues during the COVID-19 pandemic, yet foundational elements of this literary work were unofficially laid during the academic’s childhood.

Hoven is an associate professor and the Peter and Doris Kule Chair in Catholic Religious Education at St. Joseph’s College. But in the early 1980s, Hoven was among the thousands of Canadian kids astonished by the on-ice genius of Wayne Gretzky and his Edmonton Oilers dynasty. 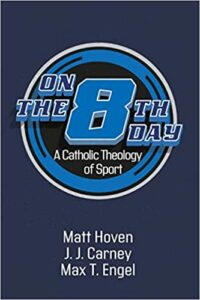 While attending a game, Hoven noticed a nearby fan unveiling a banner, which read, “On the eighth day, God created Gretzky.”

“I remember turning to my dad and asking, ‘What? Is that for real?’ In one sense, I was hoping he would say yes because there was something magical about Gretzky. How he scored so prolifically, and how he played behind the net. He played the game and saw the ice so differently.”

St. Joseph’s College is hosting a book launch Nov. 23 from 4 to 5:30 p.m. in the SJC boardroom and on Zoom. The book is available on Amazon. As the title of the book illustrates, the message written on the banner stuck with Hoven through the passage of nearly four decades.

“When it came to the book, and we were thinking about the central metaphor, we thought about ‘on the eighth day’ because it is engaging with sport in a new way,” said Hoven, who authored Sport and Christianity: Practices for the Twenty-First Century a couple of years ago.

“What we’re trying to do is put a synthesis — kind of a larger idea — on how Catholic theology might approach sport. The academic literature is growing, but we wanted to see if we could put together a book of eight chapters covering different major areas that try to make sense of sport for religious people, but also for sporting people.”

Hoven’s relationship with his co-authors J.J. Carney and Max Engel dates back to the late 2000s and early 2010s. They all took classes together as Hoven and Engel sought a PhD in religious education, and Carney pursued a doctorate in Church history at The Catholic University of America in Washington. Carney and Engel are now faculty members at the Jesuit-run Creighton University in Omaha, Nebraska.

Like many creators during the COVID-19 pandemic, the three friends utilized live-stream platforms and online writing applications like Google Docs to manifest their creative insights and storytelling into a complete vision.

Researching the personal sporting backgrounds of the various popes and delving into how Catholic leaders have spoken and written about sports over time put Hoven, Carney and Engel into largely untouched scholarship terrain. This reality afforded them to, in a sense, become intellectual archeologists, discovering buried treasures of unknown to little-known facts and tidbits.

“Some of my John Paul II (research) showed me that he did over 100 speeches during his pontificate about sports, speaking to gymnastics groups, cyclists, mountaineers and to groups before Olympic Games. He played soccer in his youth, and he would later climb mountains. When he was younger, he was a very active pope, and you got a sense that he liked sports and engaging with them.”

You don’t have to look back very far to find where Pope Francis drew upon sports during a prominent speech. During the last stop of his historic penitential pilgrimage, Pope Francis told Inuit youth in Iqaluit on July 29 to thoughtfully consider the success of the Canadian women’s national hockey team.

“How does Canada manage to win all those Olympic medals? How did Sarah Nurse or Marie-Philip Poulin get to score all those goals? Hockey combines discipline and creativity, tactics and physical strength; but team spirit always makes the difference.”

Expanding upon the pontiff’s point about creativity, Hoven says On the Eighth Day: A Catholic Theology of Sport articulates how each of us experiencing tons of fun while at sport or play is a bit of an homage to God’s creative, playful spirit.

“You can even find in the Catechism and basic Catholic teaching that God created the world out of love, spontaneity, creativity and wisdom. So, the very Source, which made all things in the universe, was this playful, creative spirit,” said Hoven.

“When we have this mentality of God’s creativity at work on the macro stage, we can maybe see it more easily that the creativity and joy in sport, the friendship and the teamwork that comes out of sport is trying to point us to something larger.”

The book also examines how sport, historically and contemporarily, is where people demand accountability and commitment to truth and justice in a world wracked by societal ills. Hoven alludes to fans demanding the Big Four sports do better in the aftermath of the George Floyd protests in 2020, and the ongoing push for reform at Hockey Canada because of its handling of sexual assault cases.