Father Shayne Craig, a longtime priest and teacher in Edmonton, has been elected as the new superior general of the Society of Priests of Saint-Sulpice, an international order of priests founded in the 1600s.

“I hope to support our various seminaries all across the world with being faithful to the Church and responding to what the Church is asking of them,” Father Craig said just before he left Edmonton on Sept. 14.

The Sulpicians are located in three central provinces – France, the United States and Canada – and from those three provinces they have community branches that serve in nine other countries throughout Asia and Africa.

Father Craig credits his decades of experience as a formator as the reason that he was chosen for this role. He has been a pillar within the Archdiocese of Edmonton since he joined the formation team at St. Joseph Seminary – his alma mater – in 1994. In 2001, he was named vice-rector, and later rector, a position which he held until 2012.

“Father Shayne (as well as a few other seminary priests) has made a profound impact in my faith journey, discernment, formation and lived expression of my priesthood,” said Father Roger Niedzielski, the pastor for the parishes of Stettler, Castor and Bashaw.

“I am the man (and priest) I am today thanks to the example, words, and direction of Father Shayne throughout my eight years spent at St. Joseph Seminary,” Father Niedzielski said.

“The pedagogy of the Sulpician fathers is the formation of men in what I would call the little ways, the formation best seen at the dinner-table conversations. It’s at these moments where guys learn in subtle and unsuspecting ways how not only to be good priests but how to be gentlemen-priests,” Father Niedzielski said.

“That’s the great gift of Father Shayne and his society that he’s in charge of, it’s taking men and turning them into gentle-men, turning them not only to shepherds but good shepherds.”

Father Kris Schmidt, the pastor for St. Francis Xavier parish in Camrose, said Father Craig has a particular gift as a professor.

“Father Shayne is a teacher at heart, and not just in the classroom.  His love of the priesthood and jovial personality shine through whenever he teaches, primarily through his very active hand gestures! He was very realistic about life as a priest yet joyful and hopeful,” Father Schmidt said. “He was encouraging but wasn’t afraid to challenge.”

Father Craig is also passionate about the need for close community and lively brotherhood amongst priests and seminarians. The Sulpician approach to formation has been used at St. Joseph’s Seminary since 1990.

“In everything we do we try to model to the seminarians as the group of disciples around Jesus, so our approach to formation is very proximate, very close,” Father Craig said. “Our rooms are dispersed amongst the seminarian’s room, we eat with the seminarians, we do community activities together. . . the principle is that formation is based in a sharing of our lives.”

Father Sylvain Casavant, the rector of St. Joseph’s seminary, was a seminarian with Father Craig. They were both ordained in 1992, and Father Casavant said their friendship is a gift from God.

Father Craig will be missed, but Father Casavant is confident that his brother in Christ “is up for the challenge” as the superior-general of the Sulpicians.

A few hours before he left Edmonton, Father Craig offered a few thoughts on his time in Edmonton and this new season of his life.

What will you miss most about your work at St. Joseph Seminary?

“That’s a good question. I think what I will miss most and when you hit those teachable moments, when you connect with your student, when you say something in class that resonates with their own experience of truth … and those great moments of knowing you just hit the Gospel truth! I will miss those personal encounters!”

Who has impacted you the most over your years in Edmonton?

“Oh so many people and many people who would never know it. There are lots of people who sacrifice a lot and they do a lot of what we used to do “Joe” jobs, without which out institutions would not run. . . the teaching of the faith is very important and I’ve been edified by great teachers around me, but there are a lot of other people who make this place run … people who clean things, who set things up … who do all of the ‘human things’ upon which grace can build and I’ve met profound Christians who do those things and they inspire me.”

What last words of wisdom would you have for the Edmonton Catholic community?

“There is a word that has been haunting me for years: ‘Strike the shepherd and the sheep will be scattered’. For the wellbeing of the Church, we must have good shepherds … we will never build the Church without good and holy leaders. So, we need to form disciples who can lead their brothers and sisters in the faith. We can’t be naïve that our leaders, our shepherds, our leaders are under attack. . . we need to love those who are leading us so that they can lead us properly and that’s from Pope Francis – our bishops, our pastors, we need to love them and help do what the Lord is asking them to do.”

What are you most excited for with this new position?

“I’m excited to see the Church across the world in all these different lands and culture, some places where it is struggling, some places where it is growing exponentially, such in many African countries … there are these great lights and shadows and I’m excited to be part of that great adventure and to see what the Lord is doing and to help Him!”

Fr. Craig is currently in Montreal, where he is going through the process of letting go of his life in Canada and integrating into this new season of life.

“I am still in the midst of moving – having not yet received my boxes here in Montreal. . . this is difficult, as I like to be organized and have things arranged,” Father Craig said. “I have to teach a week of our formation program for Sulpician candidates, in Lyons, France, at the start of November, and have other further meetings in Paris in December – so I have to be in France by the end of October!”

What about Sweet Pea, Father Craig’s beloved dog? “I had to give up. . . Sweet Pea. Happily, a couple I knew in Campbell River, B.C. – Tony and Linda – have taken her as part of their family. She is a very happy little girl!”

There are many ways in which his friends and family can pray for him, as Father Craig makes the transition into this “great adventure” as the international leader of the Sulpician order.

“Please pray for me that the immigration process unfolds well and that I can get settled in France to take up my duties. Please also pray for our ‘little Company of St. Sulpice!’” 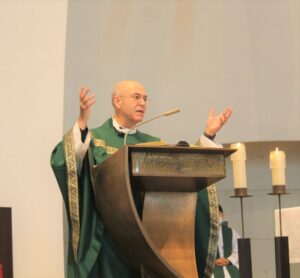 As Fr. Niedzielski said of Fr. Craig’s departure, “it is a great loss of this adopted son in our Archdiocese and in the Western Canadian Church, but a great gain for the Church Universal.”