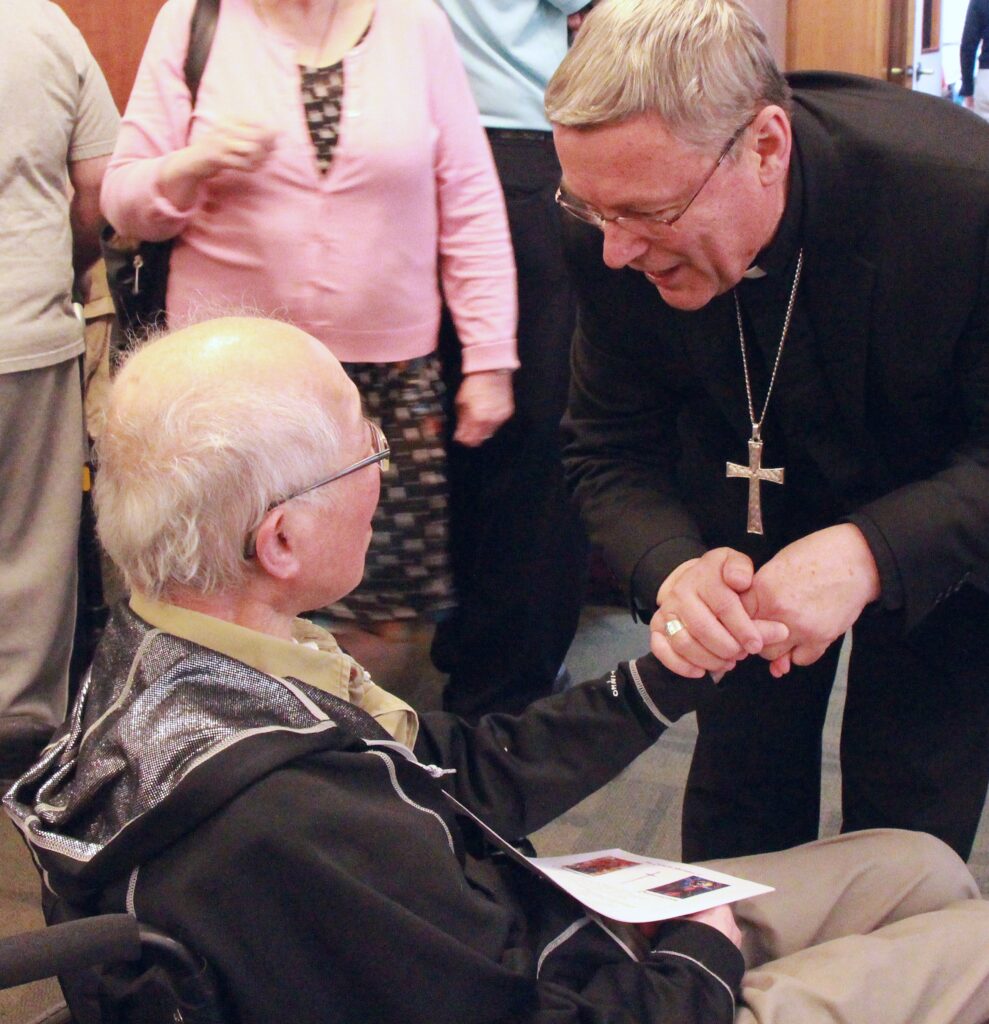 The retiring Bishop of St. Paul, Alta., may have arrived in the province as a Montrealer, but he now considers himself an Albertan and has no plans to leave the diocese once Bishop-elect Gary Franken of the Archdiocese of Vancouver takes over.

Bishop Paul Terrio said in an interview with Lakeland This Week that despite his upcoming retirement Alberta has become his new home and he plans to settle down in his adopted province.

“I’m now very much an Albertan,” Bishop Terrio said. “I have a relationship and know many of the people in this area and it’s a wonderful place, and a good place to be in today’s society.”

Despite spending most of his life in Montreal, he said he is “very grateful that I was sent here, and this is now my home. So, I’m making arrangements to stay here.”

Bishop Paul Terrio is retiring at the age of 79, four years after reaching the mandatory retirement age of 75. Bishop-elect Franken will be ordained as Bishop of St. Paul on Dec. 12, at St. Paul Cathedral in St. Paul, Alta. Bishop Terrio will serve as apostolic administrator for the diocese until Bishop-elect Franken’s ordination.

In a 2012 interview with The Western Catholic Reporter, Bishop Terrio described the long and winding road that took him from the Eastern Townships of Quebec to St. Paul, with stops in Brazil and Rome along the way.

He attended Concordia University in Montreal where, along with his studies in philosophy, literature, and humanities, he would go to noon Mass at the downtown cathedral. “I didn’t force myself to do it. I felt drawn.”

On campus, he attended a Lenten mission hosted by the Newman Club. “I realized that not only can you become an educated Catholic and believe, but it gets more and more interesting. There just seemed to be more and more room in God.”

The young Terrio decided it was time to check out the possibility of a priestly vocation and he entered the Montreal seminary, with its huge community of 250 to 300 seminarians. The first year was in the traditional monastic style where seminarians could only leave the grounds once a week. In the second year, seminarians were sent to the University of Montreal. Because they were on a large secular university campus, they couldn’t always get to daily Mass.

Quebec and the Church were changing rapidly. By 1970, only 26 of his original class of 120 graduated and not all were ordained to the priesthood. “They dropped off like flies,” he said.

Terrio was ordained May 23, 1970, by Archbishop Paul Gregoire and was assigned to Montreal’s Basilica of Mary Queen of the World for his first five and a half years of priesthood.

“They were wonderful years. You meet the world in a place like downtown Montreal,”  he said. “There were five priests in the parish and they each heard confessions for at least an hour a day, five days a week. “We needed all the help we could get to man the confessional and say all the Masses.”

His work at the basilica was pastoral – marriage preparation, meeting people in their homes and the schools, preaching, preparing people for the sacraments and helping to establish Meals on Wheels. “It really confirmed me in the vocation to be a priest. I’ve never regretted it.”

From there, it was on to the College de Montreal, a private secondary school run by the Sulpicians where he taught, mentored students, and celebrated daily Mass.

He was drawn to the life of the Sulpicians by their community life, spirituality and commitment to education. In 1981, he joined the association and two years later was sent to Brazil. His time there was interrupted by two years in Rome where he earned his licentiate in philosophy at the Gregorian University.

He returned to Brazil and taught for several more years until Edmonton Archbishop Joseph MacNeil asked the Sulpicians to assume responsibility for St. Joseph Seminary. Given that Father Terrio was one of the few members of the Montreal Province who was English speaking, it wasn’t surprising that he was asked to come to Alberta.

Archbishop MacNeil gave the Sulpicians responsibility for St. Peter’s Parish in Villeneuve and its missions and Father Terrio became the pastor. Still involved in the seminary, in 2000 and 2001, he helped set up its philosophy program. But the next year, Archbishop Thomas Collins appointed him pastor at Holy Trinity Parish, where he received “a bigger dollop of administration.” The parish had just built its new church and had mortgage payments of $21,000 a month. “That’s an awful lot of money. It required quite a head change for me.”

The parish grew quickly and he had to coordinate a large staff. The parish put its pastoral focus on youth and family, but it still had to keep ahead of the debt. Father Terrio learned a valuable lesson: “If people see they’re getting good meat-and-potatoes pastoral services, they’ll step up to the plate.”

Despite the financial scare and the burden of administration, it was, just like in the first assignment in downtown Montreal, the pastoral work that fulfilled him. “I love serving and celebrating the faith of the community.” That meant everything from preparing a family for a funeral, couples for marriage and unchurched people for the baptism of their children. “The pastoral accompaniment involved in each of those situations is really the inner guts of pastoral ministry,” he said, requiring becoming a faith mentor and a dialogue partner.

He saw becoming the seventh bishop of St. Paul as a continuation of his pastoral ministry. “Being a priest with people, being a pastor, that’s what it’s all about.”

He told Lakeland This Week that Bishop-elect Franken will have to become acquainted with the traditions, local parishes, and other things unique to rural Alberta once he arrives. “His first challenge is just to get to know and to circulate through the territory, and then from parish to parish,” said Bishop Terrio.

He also shared the biggest challenges he faced as bishop, which he said applies to all bishops in North America – the secularization of society.

“There’s no bad will there, and it’s just what’s happening,” he said. “It’s sort of an innocent and practical agnosticism or atheism where people don’t necessarily say they don’t believe in God – but practically live as though there is no God.”

Among his memories was the 2016 wildfire in Fort McMurray. “The outpouring of support and people helping people was an outstanding experience for me in my time here as bishop,” he said. He recalls a Catholic elementary school principal in Fort McMurray taking on the role of bus driver and evacuating children.

Among the successes of his term, he says, was bringing the contemplative Poor Clare Sisters to the diocese.

He also addressed the dioceses’ relationship with the Indigenous community, saying Church and Indigenous are at the beginning of “a good journey of dialogue where we are learning and growing in reconciliation.”

Last year on the first National Day for Truth and Reconciliation, Church and Indigenous representatives met for prayer, dialogue, and a meal. The result was a continuing conversation that has taken place every couple of months through the year.

“Reconciliation has to be from person-to-person, from heart-to heart,’’ he said. “That starts with people listening to each other … and finding ways together to grow in reconciliation as we journey forward together.”