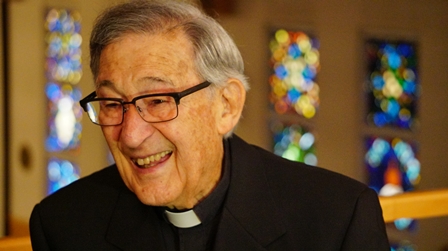 Father Frank Stempfle, one of the longest serving priests in Canada, has died.

Priests in the Archdiocese of Edmonton are expected to serve in active ministry to age 75, as long their health and personal circumstances allow. But that was way too early for Father Frank. At 91, after 66 years of serving as a pastor in the Archdiocese, he retired on Sept. 30, 2018.

The date was a bittersweet one, because it also meant the closure of St. Patrick Parish in central Edmonton, where Father Frank served two terms as pastor, from 1970-77 and again from 1986 until the parish’s closure in 2018. In 2017, his parishioners arranged for the street in front of the church to be named Father Frank Stempfle Way.

“I don’t know quite what to expect, since my whole life has been with the church beside me and serving people as a priest,” Father Frank said in an interview back when he retired.  “And of course they were of service to me, by being so kind and good to me. That’s why I stayed, because … of their support and their love. So it wasn’t a hardship; it was a joy and a privilege to be here.”

When Frank Stempfle was born prematurely in a rural Alberta farmhouse on a winter day in 1926, he weighed just 2½ pounds. His father placed him in a shoebox near the oven to keep him warm, and the neighbours didn’t think he’d live.

But against the odds, Frank not only survived, he thrived. He had a love for sports and the outdoors, a fierce competitive streak, and a self-deprecating sense of humour. At the Edmonton Country Club, a plaque on the wall attests to the fact that at age 87, he shot a round less than his age.

When Archbishop Richard Smith visited the parish to announce Father Frank’s retirement, the love that St. Patrick’s parish had for their pastor was on full display.

“We were coming in the entrance procession, for example, and I don’t know how many little children were reaching out their hands for a high-five, and here was this priest in his 90s giving them the high-five back. The grins of sheer delight on the faces of the children told me a great deal about how people of all ages really have a genuine love for this priest and for the commitment that he’s made to them over the years.”

Frank Stempfle grew up in the Rosenheim area, about 300 km southeast of Edmonton, a son of German immigrant farmers. He had an older brother, but two infants born after him did not survive. Frank didn’t think of the priesthood at the time, but a family connection swayed him.

“When doing my Grade 12 at St Anthony’s College in Edmonton, I started thinking, and thought I’d at least give it a try,” he said. “Part of the reason I entered the seminary was because of the deep faith of my parents, the great example of my parish priest, Father Ralph Malone, and the Franciscan priests at St. Anthony’s.”

At 18, he entered St. Joseph Seminary, and at 25 was ordained at St. Norbert’s Church in Rosenheim, which is now a Canadian historical site. Father Frank assisted at Heisler for just a few months before being named pastor at Winfield and its three mission parishes southwest of Edmonton. He went on to serve as pastor at Consort, Hardisty and Galahad.

In 1964 Father Frank was assigned to Wainwright, southeast of Edmonton. He became a chaplain to the local military base, and even learned to fly an airplane.

In 1970 he began a seven-year term at St. Patrick’s, a parish in inner-city Edmonton where he faced two particular tragedies. In 1976 the parish caretaker, Leo Bilodeau, was murdered during a break-in and robbery at the rectory. Less than a year later, an arsonist set fire to the church, causing considerable damage. Through it all, he said, the parishioners remained faithful and determined to rebuild.

In 1977, Father Frank was posted to Assumption Parish in south Edmonton, only to return to St. Patrick’s in 1986 until his retirement. 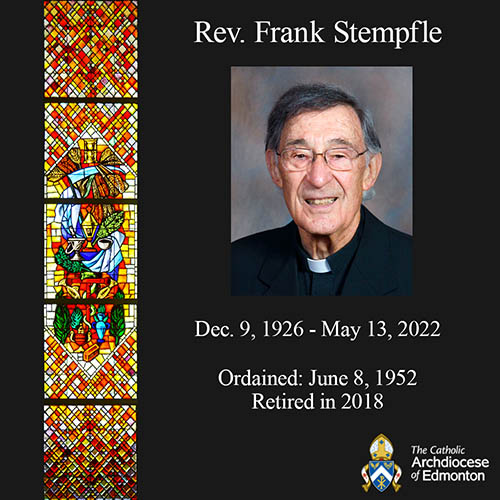