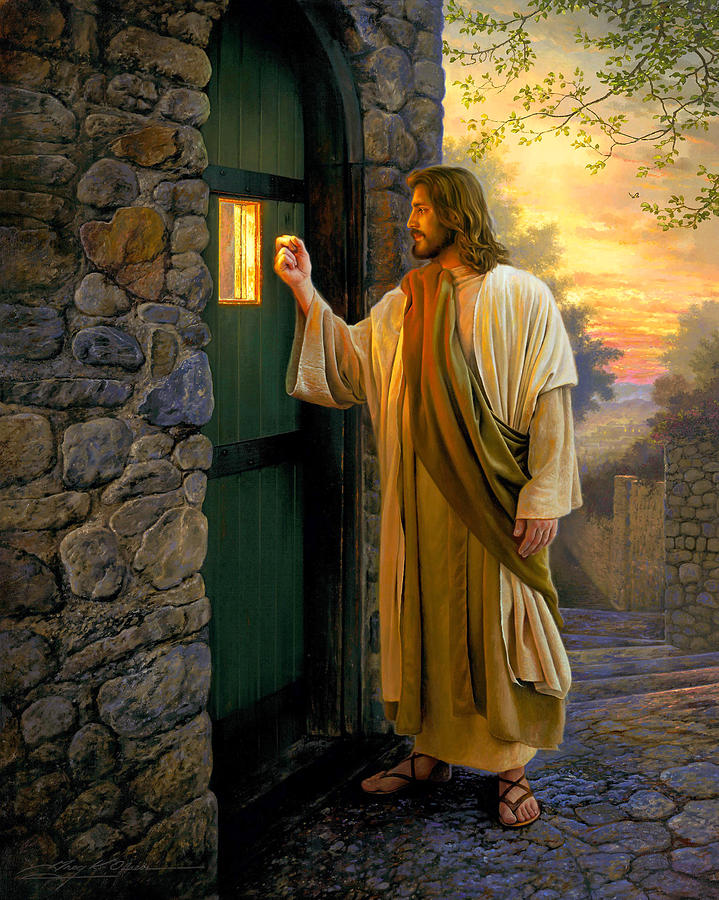 In the fall of 1997, I received a handwritten letter offering me a team (staff) position at Camp St. Louis near Bonnyville.

Accepting that invitation remains one of the best decisions I ever made. The effects of those five summers on my life linger more than 25 years later. It was at camp that I was first able to establish a consistent, daily habit of prayer. It was there that I really learned how to play the guitar. And it was at camp that I had some of my first experiences as a youth ministry leader: facilitating games, leading prayer, and preparing talks.

It was in preparation for one of these talks that I first contemplated Revelation 3:20, which says “Behold, I stand at the door and knock; if any one hears my voice and opens the door, I will come in to him and eat with him, and he with me.”

I’ve come back to this verse repeatedly. Not only have I used it in a number of talks, I have a print based on it hanging on my office wall. It shows Jesus standing outside and knocking on a door, but the door is odd as there is no knob or handle on the Lord’s side. This is meant to represent the fact that our faith is an invitation and not an imposition: we must choose to let Jesus in. The Navarre Bible explains this further:

“Christ knocking on the door is one of the most touching images in the Bible… it is a way of describing God’s love for us, inviting us to greater intimacy with Him, as happens in a thousand ways in the course of our life.”

I think this is where we struggle; those thousand ways sometimes seem too simple or ordinary for us. Some of the most memorable stories in the Bible begin with God calling someone in much more dramatic fashion than a knock on the door. It was dramatic when God appeared to Moses in the burning bush (Exodus 3) and when God called St. Paul by striking him blind (Acts 9). But there are also numerous stories where God calls people in much more ordinary ways. 1 Kings 19 describes an incident where the prophet Elijah is led out to a cave in Horeb to encounter the Lord. There, he encounters a great wind, an earthquake, and a fire … but it is finally a gentle breeze in which God speaks to Elijah. When Samuel first hears God’s call (1 Samuel 13), he mistakenly thinks that it’s Eli (Israel’s priest/judge) calling him THREE TIMES before realizing that it’s God. In the Gospels, while some become Jesus’ disciples after witnessing a miracle, others like Matthew are invited with the simple words “Follow me” (Matthew 9:9).

Which brings us back to our lives, where there are a thousand ways in which Jesus is calling to us. It’s not beyond God to again do something extraordinary or dramatic to get our attention – the lives of the saints testify to this. But most of us will experience God’s knocking on our hearts more like Elijah and Samuel: a still, gentle voice. I would propose to you three simple habits you could cultivate deeper intimacy with Him.

First, if you don’t have a discipline of daily prayer – start one. Make it something simple and consistent – something you can do for a few minutes every day. It is often suggested that first thing in the morning (you could begin with what’s known as a ‘Morning Offering’) or last thing before you go to bed are excellent moments to establish that habit of prayer. If you aren’t sure what to do with that time, you might find the suggestions here to be helpful.

Second, within whatever discipline of daily prayer you start or already have, make sure some portion of that is spent quieting your heart to listen. It can even be simply a couple of minutes long. You could make your own the words of Samuel “Speak, Lord, Your servant is listening …” (1 Samuel 3:10), and then try to quiet your heart for a few minutes to listen to what God might have to say.

When you start trying to do this, you’ll most likely get distracted. Your mind will race with the tasks and worries of the day (and many other things too!) Don’t dwell on those things, but choose to focus your mind and heart on God for the time you’ve committed. If you get distracted 10 times and turn your heart back to God 11 times, it’s been a successful time of prayer. Like anything else, this is a skill you’ll need to cultivate, to tune your heart and mind to hear God. He won’t speak every time, but you want to be attentive when He does.

Finally, try to find some time to go and be still in Adoration. As Catholics we know that Jesus is truly present to us in the Eucharist (Catechism of the Catholic Church #1374). This makes the time we spend in Adoration a great moment of grace. Despite how we might feel on a particular day, every time we go to adoration, we spend time in Jesus’ real presence.

It is a great discipline to make a Holy Hour – some people do this weekly and others daily. Others make a point of coming to Mass a little earlier to spend ten or fifteen minutes in the Lord’s presence before the Mass begins. However you do it, spending time in Adoration is a concrete way to do what Revelation 3:20 is asking of us, opening the door of our hearts to be with Christ and He with us.

“At first, it will be difficult. You must make an effort to seek out the Lord, to thank him for his fatherly and practical concern for us. Although it is not really a matter of feeling, little by little the love of God makes itself felt like a rustle in the soul. It is Christ who pursues us lovingly: ‘Behold, I stand at the door and knock…’ (Rev 3:20).” -St. Josemaria Escriva

Landry is chaplain to Evergreen Catholic Schools west of Edmonton, and serves as an occasional guest speaker and music minister in communities across Western Canada. Mike and his wife Jennifer live in Stony Plain, Alta. with their five children.