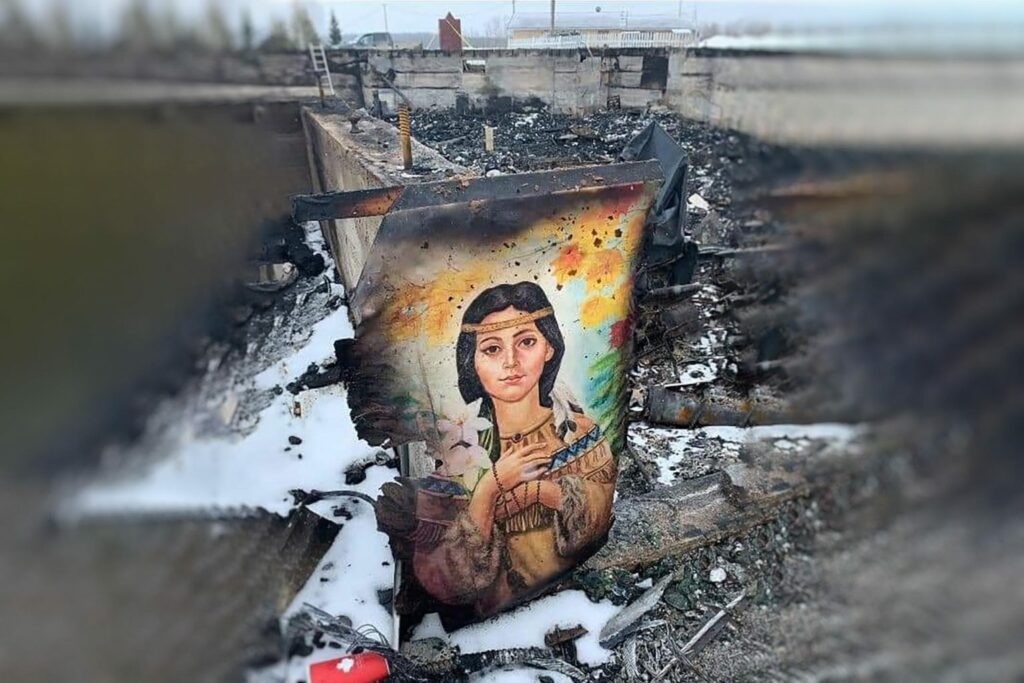 Her image on canvas somehow survived the blaze that melted the metal frame, charred the edges of the nature scene she’s depicted in and left ashes on everything else in its surroundings. The colours, still vibrant, and her peaceful image still so moving is bringing encouragement to the Indigenous community in northern Manitoba still reeling at the loss of their beloved church.

“I think that picture gives us some hope for a new church,” said Philip Wood, a member of the community. “If you look at the building itself, nothing survived, and this painting made of canvas did. It’s hard to explain. People are saying that it’s a sign that we’re being protected.”

The two-by-three foot picture of the first North American Aboriginal saint was once situated near the altar where the priest would preside over services and after the fire was found in the church basement where the rubble had fallen. Many on social media are calling it a miracle but Wood sees it as a sign from God he’s still trying to make sense of.

“Some call it a miracle but I’m just still pondering what I should call it,” he said. “I think about that picture and I’m sure it’s got a message. I can’t figure out what that message is. Maybe we’ll know later. Maybe in time we’ll know why.”

The day the fire happened is not one the community will soon forget. On April 4, Chief Marie Wood had returned home from Easter Sunday service and was just starting up the barbecue for dinner when she got the call: the church she had just left was on fire.

She jumped in her car and headed back only to watch in horror as the only church in her devout Catholic First Nation community was reduced to ashes.

“I was devastated,” she said. “I don’t want to say that I cried but I cried. I was just hurting. It was sad to see it go. I took a picture of it and I said thank you to the church for being good to us.”

Marie Wood along with many others in St. Theresa Point First Nation, located about 460 kilometres northeast of Winnipeg in the Archdiocese of Keewatin-Le Pas, stood there watching, overcome with emotion at the loss of their place of worship.

She was flooded with memories of all the years spent within its walls. She was married there in 1970 and had three children and 11 grandchildren who were all baptized and confirmed there. It was there where her husband’s funeral service was held just two years ago.

“The church meant a lot to everyone in our community,” she said. “It’s almost like losing a member of our community. It was a great loss.”

Worshippers had long left the building when the fire began that afternoon. A 32-year-old male suspect who was reportedly seen leaving the church was arrested and later released with restrictions while police continue to investigate.

The parish priest, Rev. Victor Ferdinand, was already at the airport heading to India to visit family when he got the call. Shocked and concerned for the safety of the people, he quickly called Archbishop Murray Chatlain and rushed back to join the community only to watch as firefighters worked to quell the flames.

Marie Wood recalls that someone remembered the Eucharist that Ferdinand had consecrated for the congregation’s use in his absence. “Go and save Jesus,” she heard someone yell. As lay ministers attempted to enter the church to save the Eucharist, Marie Wood shouted at them not to go in. By then the ceiling had already begun to cave. It would have been a perilous and pointless mission.

St. Theresa Point is one of 50 communities situated in the 80-per-cent Indigenous Archdiocese of Keewatin-Le Pas, spread over a large part of northern Saskatchewan and Manitoba.

Chatlain says he’s always been proud of St. Theresa Point for its spiritual commitment, enthusiasm and devotion to God in practising their Catholic faith. It’s also a place where traditional Indigenous spirituality is celebrated and practised.

“I’ve participated in sun dances there and other traditional gatherings, but their practise of their Catholic faith is very strong as well,” said Chatlain of the community which has a population of close to 5,000 people. “I think that’s a healthy balance. The church is a very integral part of their community so it’s a very heartfelt loss.”

“Our priests understand our ways,” said Marie Wood. “It’s all the same Creator that we worship.”

Other than the painting of St. Kateri Tekakwitha, the only features to survive the fire was a statue of Mother Mary that stood outside the church, unshaken as the building was consumed behind her, and the grave site and marker of Rev. Marius Dutil, OMI ,who was pastor from 1971-83. He had so much affection for the church and community he had asked to be buried there.

The community had been fundraising to start building a new church, as the old one at roughly 65 years old had structural and plumbing issues. The community also struggled with capacity challenges over the years with the priest having to hold multiple services in order to accommodate congregants, many of whom had to stand for Christmas and Easter services when space ran out.

Over the past two years the community had raised $150,000, but the cost for the rebuild is expected to be in the millions. With the remote community accessible solely by winter ice roads or plane, big project materials can only be brought in within a small window of time between January and March.

The archdiocese is hoping a combination of insurance, community support and donations for the rebuild efforts will help to expedite the re-build.

“Clearly we need to speed up the timeline,” said Chatlain. “At the rate we were going, a new church was several years down the road. Now we don’t have that luxury of time so we’re trying to make an immediate response to starting to plan for a new building. It still will take some time and we’ll need to do some good planning, but we have to hurry that along now.”

The Catholic faith means everything in the community, so the hope is the time without a church building will be short lived.

Services at a local gymnasium were planned for the first Sunday after the fire but took place online due to the tightening of COVID-19 restrictions.

There has been talk of a new church being named after St. Kateri Tekakwitha, but either way community members say the image will likely be incorporated in the rebuild as a reminder of God’s faithfulness through the fire.

Through the current challenges Marie Wood says she remains hopeful that everything that happened was a part of God’s divine plan.

“The church was very good to us,” she said. “We’re trying to take it in a positive way that this is not our fault, it was the Creator that wanted it to happen. It was already in the books. It was written that it would burn.”