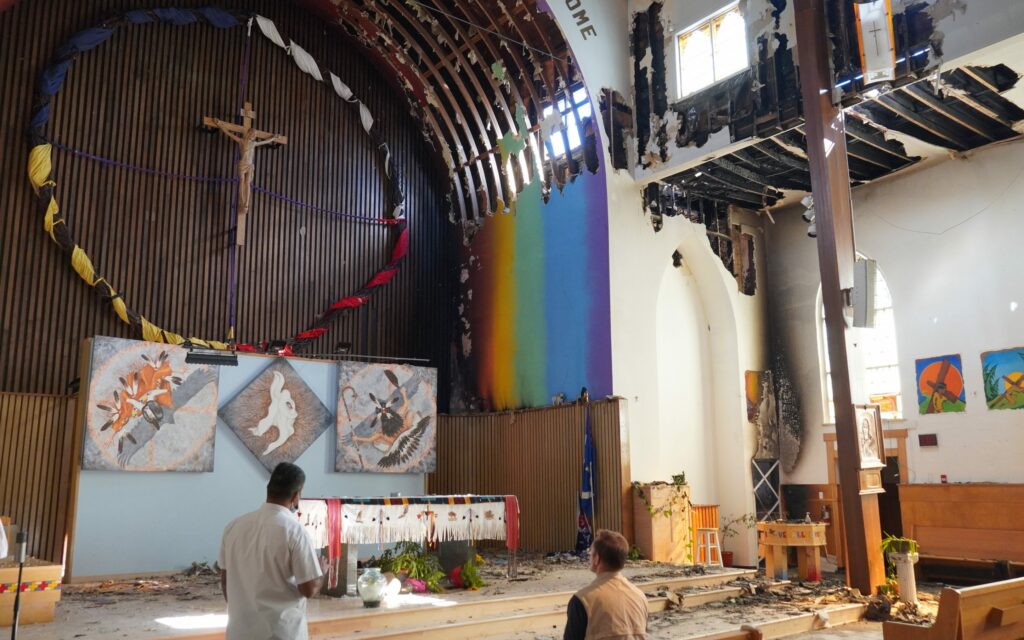 From the outside you can see some fire damage to the roof at Sacred Heart Church of the First Peoples, but inside the aftermath of the blaze – debris and ash covering the floor – is even more heartbreaking.

“At first it feels like a punch in the stomach. It’s emotional,” Rev. Mark Blom, the associate pastor, said on a walk through the inner-city Edmonton church following the devastating Aug. 30 fire.

“I’ve noticed people who drive by who want to kind of look and see what’s happening, you can tell they are very close to tears. It hurts,” Father Blom added. “And the first thing we do is validate their emotions. We validate their feelings. And then we just remind them no one was hurt. No one caused this fire on purpose. We have insurance. We’ll be able to rebuild.”

Edmonton Fire Rescue has determined that the fire was accidental. Smouldering sage and ashes from a traditional smudging ceremony was the cause.

In a Sept.1 news release, investigators said the fire began on the ground floor of the church and spread to the walls and ceiling. Fire department spokesperson Brittany Lewchuk said ashes were improperly discarded into a metal coffee can on a counter in a corner of a work room.

The Archdiocese of Edmonton says it will do whatever it takes to restore Sacred Heart Church of the First Peoples. In the meantime, Sunday Masses will continue in a different location, which will be announced on Sept. 5 on the parish’s website and Facebook page.

The damage to the church is estimated at $350,000. But for the parish community, and its spiritual leaders, the toll is priceless.

“We are often reminding people that the true church is not the building, it’s the people of God,” Father Blom said. “However we become very attached to our buildings. The power of our religious affections rests upon the sacred art, the sacred place where we pray.”

Blom recalled he was napping at the rectory when he heard the church smoke alarm around 2 p.m.

“I got up and saw out the window a fire truck with a hose going in the church, so I said ‘My church is on fire!’,” Father Blom recalled. “The fire was quite difficult to put out because the fire had gotten in between the ceiling and exterior roof. There must have been 60, 70 firefighters on scene here, nine fire trucks, a lot of activity, firemen going in and then coming out and then others taking their place in shifts. And then other firefighters replacing the air tanks right away. It was like a great relay.”

“It took quite a while for the fire to be extinguished,” Blom said. “We could see the smoke emerging from the vents that are around the main roof of the parish church.”

Only one piece of artwork was lost in the fire, the first of the 14 Stations of the Cross – “Jesus is condemned to death” – painted on the church wall opposite to where the fire was burning. All the other sacred art, statues and furniture remain intact.

“They would not let us in. The building was filled with noxious smoke, and when the fire was out, the first thing we did was retrieve the Blessed Sacrament.”

The Blessed Sacrament was not in danger of fire or water damage, Father Blom said.

“One of our parishioners retrieved the sacred books, the lectionary and the sacramentary. He kind of snuck in and saved those books. When people came for Mass at 7 p.m. I was out on the street meeting them and doing a little Communion service right on the street.”

The downtown Edmonton church, was built in 1913, making it among the oldest Catholic churches in the city. In 1991 Archbishop Joseph MacNeil designated it as a national parish for First Nations, Métis, and Inuit people, meaning that anyone with Indigenous ancestry is considered a parishioner. It was the first of its kind in Canada.

In spite of the fire, the Archdiocese says it will take the next steps to restore the church as it did after a devastating fire in 1966.

While the fire was devastating, it also demonstrates the resilience of the community, Father Blom said.

“We’re very grateful that nobody was hurt and we’re also grateful that we have insurance, that we have a fire department, that we have the Archdiocese and all the other relationships that serve us here in Edmonton, all the people who have wished their support, their prayers, their financial offerings.”

“It’s a challenge,” Father Blom added. “We’ll have to work hard on this and when we’re finished we’ll have a newer church and we’ll have a stronger community as well. This is not just about loss, but it’s also about how we restore things together in Christ.”