When it comes to books about sports, there are plenty of “fun reads” out there, but Matt Hoven saw there was something missing for those who take the study of sport seriously.

What the associate professor of religion and education at St. Joseph’s College was looking to do was put together a book the general reader would appreciate, but also one with a scholarly touch to it.

The finished product is the recently released Sport and Christianity: Practices for the Twenty-First Century. Hoven is one of three editors, along with British academics Andrew Parker and Nick J. Watson, all of whom contribute chapters to the book.

“What I pitched to them was something that had a bit of an edge, that would be turned toward practitioners, people who play, who referee, coach, manage,” said  Hoven. “How they might be able to read something of substance and reflect further on sport.” 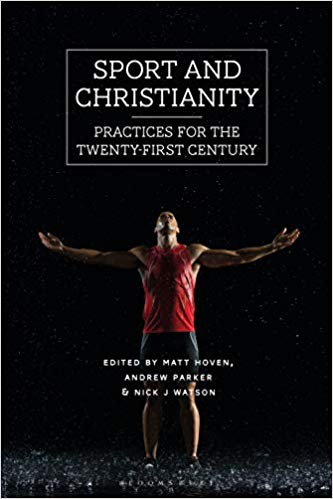 Hoven relishes the opportunity to help people really think deeply about sport — beyond the course he teaches on religion and sport at St. Joseph’s — through the contributions that make up 13 chapters over three distinct sections.

Many people are passionate about sport, yet little thought is given to its role and importance in peoples’ lives. Sport and Christianity examines potential in athletics and challenges readers to consider how it relates to their passions, behaviours and action, as well as how participation connects to faith-based values.

The editors bring together academic writers from a range of disciplines, including philosophy, theology, sports studies and education, from across North America (Hoven is the lone Canadian) and Europe and give insight into sports for Christians as participants and as practitioners.

It examines the good in sport, but doesn’t shy away from detailing the bad as well. There is the beauty of a finely developed play performed to perfection that paves the way to victory, but also the over-commercialization of sport, or the unfairness of your team losing yet again on the big stage.

“It’s being able to celebrate the aesthetics and the joy in life and that spirit of play that’s needed,” said Hoven. “But of course always keeping a critical eye on it because it’s not perfect by any stretch.”

Watson and longtime Journal of Sport Philosophy editor Scott Kretchmer of Penn State University even bring G.K. Chesterton into play in their chapter, “The Paradoxical Athlete: Chesterton on Play and Work.”

Hoven is a great fan of sport and can’t stress enough the importance of taking it seriously. He often sees the disdain aimed sport’s way in the halls of academia, but also sees a world that is increasingly open to taking it seriously and not just as an escape.

“There are a few signs that we’re doing more of that,” he said. “Since the 1960s there are kinesiology departments that study sport, movement, leisure, and that field is just growing and growing.”

We see it in government funding, where the value of sport is recognized at the highest levels right down to the grassroots, something he witnessed in early January in Edmonton where minor hockey week was being celebrated. And he sees sport bringing people together, looking no further than his son’s hockey team where among the parent group are immigrants from Mexico, Venezuela and Sri Lanka.

“It’s a social binding institution and it’s especially good for integrating newcomers into the country,” he said. “It really brings people together.”

In his own chapter, “Lived Religion in Sports,” Hoven takes athletes readers would recognize, like sprinting legend Usain Bolt, and shows how they live their faith through sport.

“Whether it be praying in sport, wearing tattoos of the Virgin Mary, different moral acts of charity or mercy within sport. Different things that people do that you might not think as religion but when you have a person trying to live out their faith it will come through in different avenues and when they’re dedicated to the sport you’ll see examples of that,” he said.

“It’s trying to see that sport is an avenue that people actually try to live out there faith in. It’s not simply somebody kneeling in the end zone.”

Where he draws the line is some of the over-the-top parallels drawn between Christianity and sport, your “redemption” games and such metaphors found in the sports pages and broadcasts (though he can’t help but laugh at an old Edmonton Journal headline when Eskimos placekicker Grant Shaw for the second week in a row missed a game-winning field goal: “Shaw shanks redemption”).

“There can be some commonalities,” he agrees, but “it’s important not to equate them, I think it gets silly.”

The book, published by Bloomsbury Publishing, is available at Amazon.ca.