The official program for the Papal Visit to Canada was released on June 23, 2002. We continue to work with…
Continue Reading

Sometimes the best gifts are not bought at a shopping mall, wrapped in paper and tied with ribbon.

They can be as simple and profound as a good story, shared together with family and friends.

As Advent approaches, leading into Christmas and the celebration of Christ’s birth, author Ryan Topping invites us to share his family’s tradition of reading together around the fireplace. First, stories are read with the kids. Then the brandy and egg nog are brought out, and the adults read together.

In his new book Christmas Around the Fire, Topping shares great works — from the solemn to the heart-warming — from renowned poets and novelists. Topping curates works from G.K. Chesterton, Charles Dickens, Canadians Catherine Dougherty and the humourist Stephen Leacock, as well as the thoughts of great religious figures from Pope St. John Paul II, and Pope Benedict XVI.

These are a compilation of the Topping family’s favourite stories, and a departure from the academic books written by Topping, the academic dean a Newman Theological College.

“The goal of the book was to try to hit all ages,” said Topping, a father of nine. “In a way, it’s a little bit of a gift from our family to other families. That’s because it draws from our own experiences reading in this way and being nourished by certain stories.” 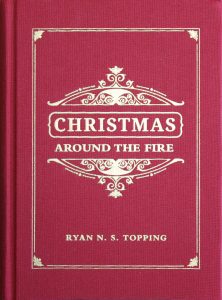 In an interview with Grandin Media, Topping shares some insights about Christmas Around The Fire which is available at the Newman Theological College book store, and on the TAN Books website.

Tell me about the book.

This is really the only book of mine that my mother will read, I think! Usually I work on more academic books. This is a gift book, and it’s meant to try to insinuate Christian culture. Why do we need stories? Stories have a far more powerful capacity to shape our thinking, our imagination, our emotional life.

A good story is one that the kids will love and the adults will love. And so all of these stories are stories like that. That’s the sure mark of a winner: if it gets everybody’s attention. They’re based on stories that I thought were beautiful, that weren’t too long, that were drawn from different places.

How can families start a tradition of reading together?

We often think of Christmas as what happens before Christmas. In fact, in the Church there’s this beautiful sequence where you get an unfolding of the mysteries of the Incarnation starting with Advent, Christmas and Epiphany. They each have their own special gift to offer. The goal here is to try to help families initiate themselves into the various movements, you might, say, of the grand event which is the Incarnation.

What we need to work at cultivating — and it’s joyful — is a sense of holy leisure. What you do when you’re not working should be fun, should be pleasant, even while it’s good. So turn off the Internet. That’s why people aren’t doing good things. They have accepted B-rate pleasures.

Have we lost the meaning of Christmas – the birth of Christ?

Our society is becoming deeply de-Christianized, and you can see it by all kinds of metrics. However, the fact is Christianity remains dominant overwhelmingly in the country. Evangelistically, one of our goals should be to find what’s good, and blow on those embers which are still present for many people.

One of the goals we need to take on is to realize is no one is going to make happiness in this home for us. You have the great privilege of being the king and queen of your habitation. And you need to set rules that are going to help flourishing, and you need to establish customs that will plant the seeds of faith and reading is one of those.

(Two of Dickens’ essays, The Spirit of Christmas Past and What Christmas Is as We Grow Older are included in the book)

It’s not surprise that Dickens is universally loved for a hundred years, because he’s able to touch us in a way that doesn’t feel too heavy and yet it draws us closer to Christ. It tries to represent the joy of the season and it’s solemnity.

What’s your favourite story in the book?

It’s The Other Wise Man by Henry Van Dycke. It’s fantastic. It’s an imaginative tale about – we all know about the three wise men – about a fourth that didn’t quite make it on the journey as he wished to. It draws you into the time of Jesus and it’s a page turner. It’s a thriller. And it’s redemptive.

I like his other one too, The First Christmas Tree; that’s medieval. It’s about Winnifred’s (later St. Boniface) conversion of the Germans. If you like drinking beer, and having a fire and thinking medieval thoughts, that’s a good story.

How do your kids feel about sharing the stories they’ve come to know and love?

They’re quite delighted. They love fame and glamour in so far as it’s possible them to have it! I think they like The First Christmas Tree the best because it’s so romantic, and medieval and also filled with death and drama, but it’s redemptive.

For families who don’t have reading as a tradition what do you suggest?

Pick some time before bed. Take 20 minutes every night for a week. Make your way through a story or two and see how it goes. One of the problems with Christmas now is that it’s too busy. Trees are up after Halloween.

Making time to read is also a way to make time to be a little bit quiet and not so busy, especially in Advent where we’re often going to parties when really it’s meant to be a bit of a sober time.

The last selection in the book, a homily by Pope Emeritus Benedict XVI, talks about how God has to compete for attention. It’s especially true during the Christmas season.

He’s asking the question, ‘why do some people stay away from God? Why are we scared of him when He loves us?’ He wonders aloud ‘Is it that we think God, if we let him in, will make us unhappy? Would God try to hurt us? Would he take away the things that we want, that we like?’

Benedict is insinuating that, yes, we think He will, but he won’t. God only takes away to give back. Therefore we should have no fear handing ourselves over to Christ who came as a child so we wouldn’t be afraid of him. So God woos us gently by his love. He takes down his armour. He makes himself vulnerable.

If we think our freedom is going to be ruined, it’s only because we have a corrupted idea of freedom. Freedom is lawlessness. You’re not going to be happy with being lawless.

Is Christmas Around the Fire accessible to readers who are not Christian or have no faith tradition?

Absolutely. Stories bring things to you. You don’t have to bring much to them. If you like good stories, well then you’ll find in a good Christmas story something that will resonate with you.

Who is the target audience?

I would say it’s an evangelistic tool too. If you have relatives or friends for whom you want to give some sort of gift that would show them something about Christ and Christmas, but you don’t want it to be preachy or didactic, well, stories are a good means.