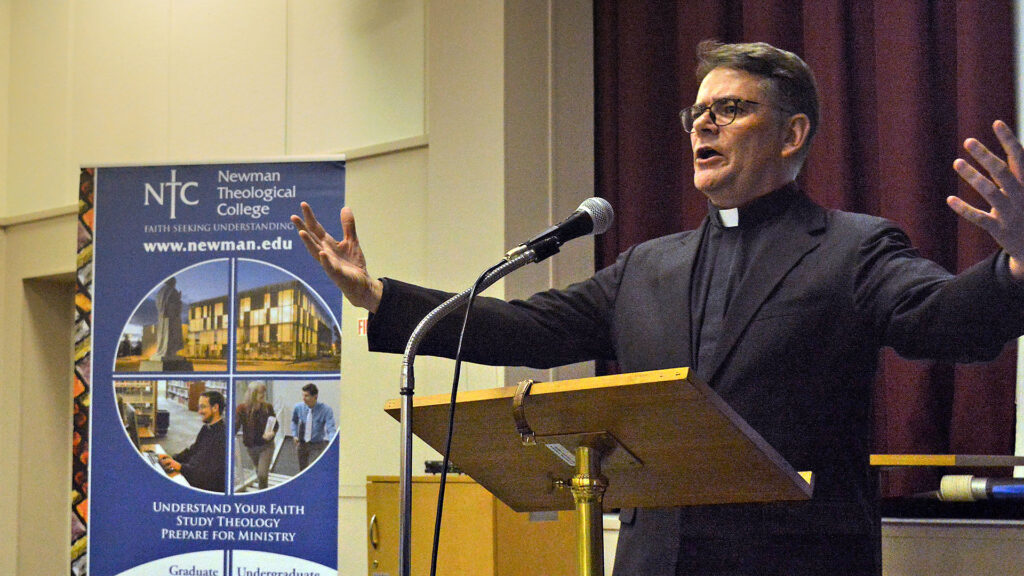 When Father Richard Leonard — a Jesuit priest and internationally recognized author and critic — tells people about how God helps us in suffering, his insights are not theoretical. He lived it.

Leonard recalls the exact date, Oct. 24, 1988, his birthday, when he learned his sister’s car had slammed into a tree after leaving the road. The accident left Tracey a quadriplegic. She spent her remaining 28 years in a wheelchair, unable to move her arms or legs.

He’s spent the intervening years telling people about the answer.

In an Oct. 29 lecture, as part of the 50th anniversary of Newman Theological College, Leonard posed that same question: In a world often plagued with suffering, pain and tragedy, where the hell is God?

For Father Leonard, it’s a question that can determine everything. It can make or break one’s faith. It can define one’s entire relationship with God.

“We’ve got to clean up our theology in understanding our own crosses and sufferings in life,” he said.

“Many Catholics have a God who is a tyrant, a God who keeps ‘doing them over.’ But the God revealed in Jesus Christ is a God of love. The whole point of the Incarnation is God becomes one with us in Jesus Christ. God is not aloof to our suffering.”

In his speech and book, both entitled Where the hell is God?, Father Leonard tackled the problem of evil and how we find the presence of God during life’s most difficult moments.

“It was when my mother most needed her faith to kick in that she was only aware of God’s absence,” Leonard said as he recalled her reaction to Tracey’s accident. “So I decided to have a go at answering that question ‘Where the hell is God?’ And I’m so glad I did.”

After the accident, Leonard threw himself into studying at seminary and into helping his family persevere.

Through that experience, Leonard learned that faith is often shaped by how we react to life’s misfortunes. Tracey suffered an accidental tragedy, but God can turn even the most devastating tragedies into a source of inspiration, growth, and resilience.

“It doesn’t mean that anything that happened to Tracey after her accident was a good thing. It just means that we grow through suffering.”

Leonard’s core message is that God is first and foremost our companion, and not the cause in life’s suffering. To him, this is the essence of Christian theology.

“This is classic Catholic theology and I’m sorry if this is the first time you’ve heard it. We believe God permits the possibility of evil so that we are fully free to choose good. We can grow in God’s grace as a result of evil, that doesn’t mean it’s sent directly by him.”

Father Leonard’s message of God’s companionship with us was the biggest takeaway for Jo-Anne Paquette.

“I was touched when he had said that God is with us in our suffering,” she said. “He’s not this unknowable force sending us success or misfortune. He’s there holding us and experiencing that pain with us.”

Leonard said this can be one of the most healing revelations for people, and he sees it in his own pastoral work. Many Christians will believe a car accident is God punishing them, rather than an unfortunate consequence of people’s free actions, or in the same way, incorrectly believe a hurricane must be a chastisement from God rather than a natural weather pattern.

It is only through understanding the role our own free will plays in life’s difficult moments that people can fully see God as their comforter and healer, Leonard explains. He believes this understanding would change people’s attitudes towards many of the world’s problems.

“There are so many things we create for ourselves and we then blame God,” he said. “People will often say ‘How can you believe in a God who allows famines to happen?’ But I reckon God looks at us and says ‘Why do you let the famines happen?’”

Terry Harris was particularly impacted by Leonard’s description of how suffering fundamentally shapes our relationship with God.

“That was an important subject to me. Things and circumstances can impose evil or suffering upon us, but it is still my responsibility in how I respond to these things,” said Harris, an Edmonton Catholic Schools trustee.

“It can be extremely difficult for someone who experiences tragedy to keep their faith, and I feel for those people. But how we respond to tragedy is based on our faith and our understanding. If we base that on those first principals of faith, love and forgiveness, than that is a program to endure suffering.”

Leonard agrees that virtues like faith, hope, and love ought to be a Christian’s tools in facing life’s difficulties. It is only by living those Christian virtues that one discerns God’s will in their lives.

“I used to believe in what’s called blueprint theology. God had a set blueprint for my life and I had to find out what it was,” said Leonard. “But if we get locked into this thinking of ‘Where I am now is God’s will and I can’t change it’, then what happens to our free will?

“We’re not coerced into God’s grace, we’re invited. Our freedom is not removed. So we should be thinking ‘How can I become the most faithful, hopeful and loving person I can?’ That’s a theology that allows us to breathe a little more.”