It would certainly be much easier for Padre Chinedu Chukwu to minister to the Catholic faithful in a parish in the middle of suburbia. He had been there, and done that for more than a decade.

But he was called to do something different.

Instead, Chukwu serves the men and women of the Canadian Armed Forces and their families as a military chaplain. That has taken him onto Canadian Forces Base Edmonton – and side by side with soldiers in northern Iraq with the potential for life-threatening danger just a few kilometres away.

Padre Chukwu is one of three Catholic chaplains – two Roman and one Ukrainian Catholic – at CFB Edmonton. In an interview with Grandin Media, Chukwu spoke about his role serving military men, women and their families.

“I’ve experienced certain things that I probably would not have experienced in civilian ministry. But I realized my role there was to support the people, especially the individual who had gone through the situation which didn’t end well for him,” Chukwu said after a Blue Sunday Mass on May 5.

The Blue Mass – a nod to the traditional colour of the uniform of first responders – began in the U.S. in 1934. In St. Albert, it has been a tradition for 14 years, but this was the first time a military chaplain has attended, concelebrated the Mass, and delivered the homily.

Padre Chukwu’s message? They run into danger, while others run away. “The Canadian people support those who put their lives in danger in order to help us all to live comfortably.”

As a chaplain, Chukwu knows this first-hand.

“It is a very critical role. When people deploy overseas, and they’ve experienced things that may not be in accordance with what we have here in Canada, some come back with moral injuries or emotional distress,” he said.

“Those are the times when they need somebody to help them process what’s going on. It’s important for the military members to be supported just like everyone out there who may have some struggles.”

When soldiers return from conflict zones, the chaplain is there to help them through prayer and counselling. And he is there for the families who have their own spiritual struggles as they anxiously wait for their loved ones to return. The issues range from family struggles to post-traumatic stress. Some soldiers return hurt and broken on a spiritual level.

“We can, as human beings, try to do what we can,” Chukwu said. “But sometimes our support may not be enough in that sense. It’s only God who can give them healing and peace. That’s why we always encourage people to talk to God. Come to God. Return to Him if you have wandered away, because He alone can give you the healing. God provides the healing. We are just instruments of God for His healing.”

Like any other parish priests, the Catholic chaplains celebrate weekly masses on the base and officiate at weddings, baptisms and funerals.

“One of the biggest joys is journeying with families, from when they join the military, when they have the children, celebrating important events in their lives and caring for them in their joys and struggles,” said Chukwu. “That’s a beautiful thing to do.”

And then there are the times when Chukwu – and other chaplains – have to tell a military family that their loved one has died.

“It’s probably the most difficult thing that anybody does is to walk in and let people know that their loved one could not come back again alive,” Chukwu said. “It never gets easy, because it’s a human being. It’s somebody that they will never have alive again.

“In times of deployment, when it’s in a dangerous place like Afghanistan or Iraq recently, that’s when if things go wrong, we have to support the families,” he explained. “Sometimes also, it’s a crisis with Mom or Dad not being home or children struggling, which we don’t do alone. We have other health-care professionals to help us. It’s more pronounced when soldiers from a particular area deploy en masse.”

Chukwu is part of the Roman Catholic Military Ordinariate of Canada, a special kind of diocese whose priests serve the Canadian Armed Forces wherever they are deployed. Under the Military Ordinariate, led by Bishop Scott McCaig, there are 46 priests, six deacons and 37 pastoral assistants assigned throughout Canada.

Overseas, the chaplains stay in the same quarters as soldiers. Sometimes there’s a tent or a room set up for a chapel for Mass and prayer. The chaplains are never armed.

“When you are deploying, you think about the possibility that you might not come back,” Chukwu said. “And I’m sure for our military members, that’s a huge thing to think about. But you also realize you get all the best training you can, that the military provides you all that you need to deploy, and that you have well-trained soldiers beside you.

“It’s usually difficult as you leave, as you think about all that could or may happen. But once you get there, the adrenaline kicks in and you just go on until the day you leave to come back.”

Chukwu himself deployed to northern Iraq in 2017 for about five months. For the safety of men and women currently in uniform, he is limited in what he can about his time there. However, he can talk about how the experience changed him.

Before he left, Chukwu went to home to visit his mom in Nigeria. To her, it was a social call. He didn’t mention being deployed to Iraq. He did tell his four brothers, “should anything happen.”

“She would worry too much,” Chukwu said of his mother. “I knew that I would be as safe as anybody who goes there could be. I didn’t want to get her worried about nothing.” He did tell her once he returned safely.

While he wasn’t in the line of fire, he could hear the sounds of the aircraft and fighters. “We were close enough that anything could have happened. So we were always aware that we should be careful.”

Padre Chukwu’s time in Iraq and in Canada are a world away from his roots. He was born and raised in Enugu, Nigeria – about 300 kilometres south of the capital, Abudja. He attended St. Augustine’s Seminary in Toronto and was ordained for the Archdiocese of Halifax-Yarmouth. 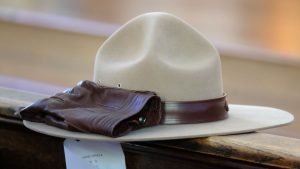 Chukwu has served at CFB Edmonton for five years; the base has another 14 chaplains of different faiths. His first military posting was at CFB Trenton in Ontario. In a few months, Chukwu will mark two decades as a priest.

For 11 years, Chukwu was a pastor. One day, after concelebrating a military funeral with a Canadian Armed Forces chaplain, the pair started talking about the Military Ordinariate. Chukwu initially dismissed the idea, but after a while changed his mind.

“I thought to myself, ‘Well, I can’t carry arms and fight for Canada, I might as well support those that can do that and provide the spiritual nourishment that they need in order to be able to do their work.”

It’s not a typical situation for a priest – praying and working toward peace in a situation that seems completely opposite. Chukwu calls it transformative.

“You are a changed person by every encounter you have with anybody or any situation.”

“They are not really kids, but they are still very young, in their 20s and early 30s,” he says of the soldiers. “That made me think a lot about the evil of war. Unfortunately, sometimes that is the only option that people have.”

It helps to think of the good that the military can do.

“Instead of watching where someone is probably going to murder the whole village, if we can help to stop that as military people, we have saved so many people. Sometimes people see it in that sense. They are helping to avoid a bigger evil from happening.”

Organizers of St. Albert’s Blue Mass say it’s an opportunity for the community to thank first responders and pray for them. And they appreciate it.

“It’s really fulfilling to them. They feel that the service is very meaningful because of what they have experienced in their career,” said Gerry Keane, an RCMP officer for 25 years before he retired in 1997.  “They are proud of what they have done in the past.”

Keane has participated in the Blue Sunday Mass for years and has been organizing the event for the last six – a task he finds fulfilling.

For him, it’s personal. “It’s meaningful for me, because I’ve had a few guys I’ve known that didn’t come back.”