Pope Francis will visit the Treaty Six Territory of Maskwacis, Alberta. This is a pivotal moment for the world…
Continue Reading

Christians shoved into cages and burned alive. Children cut in half by ISIS militants. Car bombs driven into churches and parishioners executed.

It’s been five years, but the harrowing details of the torment and killing of Iraqi Christians are seared in the memory of Canon Andrew White, the Vicar of Baghdad who once ministered to 6,500 Anglicans in the Iraqi capital as the Vicar of Baghdad. And he recalls them with a trembling voice.

“The worst thing I experienced the whole time I was there – when four of my ‘children’ were captured by ISIS,” White says of the young Christians who belonged to his church.

“And ISIS said, ‘You’ve got to either say you will follow Mohammed, or you are all dead. And they all started singing ‘Jesus loves me, and we will never leave Jesus. He is our everything.’ And they were all killed.”

The news left White devastated.  When ISIS forces invaded Iraq in January 2014, a violent conflict began that has left thousands of Christians and other minorities persecuted and murdered. According to the non-profit group Open Doors International, Christians made up six per cent of Iraq’s population, at 1.5 million in 2003. Today there are only about 225,000.

The persecution got to a point where White’s own life was in danger.

“They have demised because ISIS was out to kill them, and many of them were killed. I’ve had over a thousand of my people killed – their heads chopped off, burned to death in cages. It’s horrendous. ISIS, or ‘Daesh’ as we know them, had a huge price on my head – wanted dead or alive.”

But amid the tragedy, a group of children came to White the morning after those four young Christians were killed, delivering a vision of hope that has remained with him ever since.

“They said to me, ‘Don’t cry. Last night we had a dream of all those children dancing in heaven with Jesus,’ ” White recalled. “That is what’s kept me going. It has really set my faith on fire, and made it seem more real than ever.”

The Anglican Church has had a presence in Iraq for over a hundred years. White first started coming to Iraq in 1997, but it was the U.S. invasion of 2003 that allowed him to re-establish the St. George’s Anglican Church in Baghdad.

In November 2014, White was recalled by the Archbishop of Canterbury to Liphook, England, where he lives today. He was told it was too dangerous to serve in Iraq, and he’s not sure when he’ll return.

Nevertheless, there are signs of hope. White visited the Edmonton area for the first time May 6-8 to be reunited with a man who had once served as his personal driver in Jordan. Yasir Lalli, an Iraqi Catholic, and his family fled their home and endured four years in a refugee camp in Jordan before finding refuge in Yellowstone, a village on the shore of Lac Ste. Anne, northwest of Edmonton. 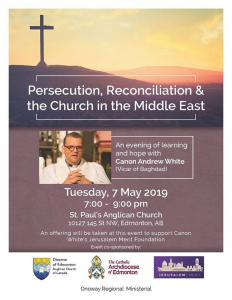 During his visit, White also delivered a public presentation at St. Paul’s Anglican Church in Edmonton, where he shared harrowing stories of the persecution Christians in the Middle East and appealed for donations to Jerusalem Merit – the charity he founded to help the Iraqi refugee community in Jordan.

Yasir Lalli, his wife Sarah Kanno, their two children Mallak and Mattie, along with Sarah’s grandfather Sami Kanno, have lived in Yellowstone since July 31, 2018. On May 8, they were reunited with White in Onoway, where four congregations – St. John the Divine Anglican Parish, St. Rose of Lima Catholic Parish, Onoway Baptist Church, and Zion United Church in Alberta Beach  ̶  had joined forces to  sponsor the family’s settlement in Canada.

“It gives me great joy that they are safe and there are people caring for them,” White said. “I’m also sad because I’ve missed them. Many of these people, they are not my adopted children officially, but they’re like my children. So coming here to see my people and see them safe and alive is wonderful.”

White hadn’t seen Lalli in nearly 10 months. And he was visibly delighted to see eight-year-old Mallak and five-year-old Matti.

“He likes my kids,” Yasir said with a smile. “He asked me, are we happy here? And I told him ‘We are very happy,’ that we have met very nice people and the children love their school. He’s happy that we have it much better here than in Iraq and Jordan.”

The Lalli family fled for Jordan in 2014, crossing the border by plane because driving a car was too dangerous. They knew that staying in their hometown – Baghdad – was too risky.

“Me and my sister were in church. When we finished Mass, people went to go outside and when they opened the door – two cars drove into the church and blew up,” Sarah recalled. “Me and my sister had stayed inside after the Mass, but all the families that made their way out – many died.

“Me and my sister looked at all the people dead, and all night we had no sleep. After that, we did not go to church again. We didn’t feel safe to go.”

The U.S. invasion of Iraq in 2003, and the collapse of Saddam Hussein’s dictatorship that same year, created a vacuum of power, and militants such as the Islamist extremist group ISIS moved in. The Lallis say ISIS came specifically to kill as many Christians as possible.

“I must admit, I was initially in favour of the war because I had seen how evil the Saddam regime was,” White said. “But I soon learned after the war that we had actually made a major mistake. Iraq was in a worst state after the war than before.”

Even as the risks and violence increased, White remained as vicar at St. George’s, continuing to celebrate Mass and provide solace. Asked what gave him the strength to remain in Iraq, in the face of so much danger and bloodshed, he says he stayed because he knew he was doing the Lord’s work.

“I really can’t tell you how many times my life was in danger,” he said. “I was kidnapped. I was shot at when I went to visit my parish. I had 35 armed guards and soldiers there to protect me. It wasn’t like the days when I would do my parish rounds in London on my bicycle. So yes, it was a bit dangerous. But by God’s grace and provision I managed to do it. When God calls you to do something, He enables you to have the ability to do it.”

After White left Iraq, he established Canon Andrew White Reconciliation Ministries and the Messihi School in neighbouring Jordan. Three hundred Iraqi children attend the school, which has become a sanctuary for many Christians who have fled their homeland.

Poverty and unemployment plague refugee families in Jordan. The Lalli family lived in one bedroom in an Amman slum for more than four years. Unable to find other work, Yasir took a job as White’s personal driver.

Half a world away, Onoway resident Mu Lavin and fellow parishioners at the St. Rose of Lima Catholic Parish wanted to help address the growing refugee crisis in Iraq and Syria. Lavin, who had known White for years, asked for his help.

“I contacted Father Andrew and said we would like to sponsor a Christian family, and he said, ‘I have just the family for you,’ ” she said.

The Lalli family arrived in 2018 and have settled in. They were gifted a home with one year of free rent, as well as two vehicles. Yasir has taken a job as a mechanic and their two children have nearly completed a year of school at Rich Valley Elementary School in Lac Ste. Anne County.

“Everybody has helped us when we need anything – hospital, school, shopping, anything,” said Yasir.

That’s not to say it’s been easy. The Lalli family arrived with no understanding of English, and they continue working to learn the language. It took nearly six months for Yasir to acquire a Canadian driver’s licence.

Sarah Kanno said most of their family and friends still live in Baghdad, but the situation remains very dangerous for Christians.

“There’s still no government there. My sister now just stays home. She does not go to Mass. She doesn’t go shopping. She is sad every time I speak with her.”

White said the persecution of Christians continues in Iraq and around the world, from Sri Lanka to Burkina Faso.

“Our challenge as Christians is to say that this persecution is not something we just pray for quickly on Sunday,” he said. “What we have seen here in Alberta is that they have proved that they can take those who are persecuted and love them and care for them, like I’ve not seen anywhere else. To see that these people have really been brought in and welcomed and become part of the community – I love it. It gives me great hope.”

The Lalli family attends Mass regularly at St. Rose of Lima. Sarah says her faith has kept her family together as they approach their first-year anniversary in Canada.

For Mu Lavin, and the other volunteers who have helped the Lallis, it’s a heartwarming sight.

“Our premise from the beginning was we can’t solve the problems of the world, but for one family we can be the whole world. And this is that family.”

No longer on death row, Asia Bibi to settle in small-town Canada with her family

Amidst prayers for unity and justice, Christians learn of persecution in Indonesia