Cardinal Malcolm Ranjith of Colombo earlier had announced that Sunday Masses would be held on May 5, but he canceled services after considering the latest security alert about possible attacks, ucanews.com reported.

Catholic schools have been closed until further notice. Although government schools reopened May 6, classrooms were nearly empty.

A police curfew was imposed in Negombo on the night of May 5 after a clash between ethnic Sinhalese people and Muslims.

St. Sebastian’s Church in Catholic-majority Negombo was among the sites bombed in the Islamic State group-linked Easter attacks.

Cardinal Ranjith celebrated a televised private Mass at the archbishop’s residence in Colombo May 5. He said the faithful could have chosen to stay home but they all came to the church because of their love of God.

“These members of our community who sacrificed their lives, they are with God because they have passed away due to their strong faith,” he said at the Mass.

Cardinal Ranjith refused to have a bulletproof vehicle provided by the government and chose to travel in an ordinary car.

“I don’t want a bulletproof vehicle, but I need security for the country,” he said in a media briefing.

“The government must formulate a permanent plan of action to strengthen national security with the participation of all political parties to ensure that there is no repetition of such incidents,” he said.

“We appeal to the government on behalf of all religious leaders not to allow the destabilization of the country to take place by creating dissension among different nationalities and those professing different faiths.”

Shortly after the attacks, Rev. Mirek Kostarzewski, the pastor of St. Mary’s parish in Red Deer, received a letter and a bouquet of flowers from four leaders of the Central Alberta Islamic Cultural Association. They approached him shortly after Sunday Mass April 28.

“It was a surprise, a beautiful surprise,” Kostarzewski said. “They wanted to show that, as a people, we come together for the good of our religions and our community.”

In the letter, Pashtoonyar Zekria, president of the cultural association, writes: “Islam condemns these senseless acts in the strongest terms … We would like to offer our sincere and deepest condolences to all our fellow Christians and Catholic friends. As your fellow Muslim friends we share your grief and stand shoulder to shoulder.”

Kostarzewski said he’s grateful for the support, and the letter has been posted on the St. Mary’s parish website. He has been invited to the Red Deer Islamic Center and he’s invited Muslim leaders to St. Mary’s. 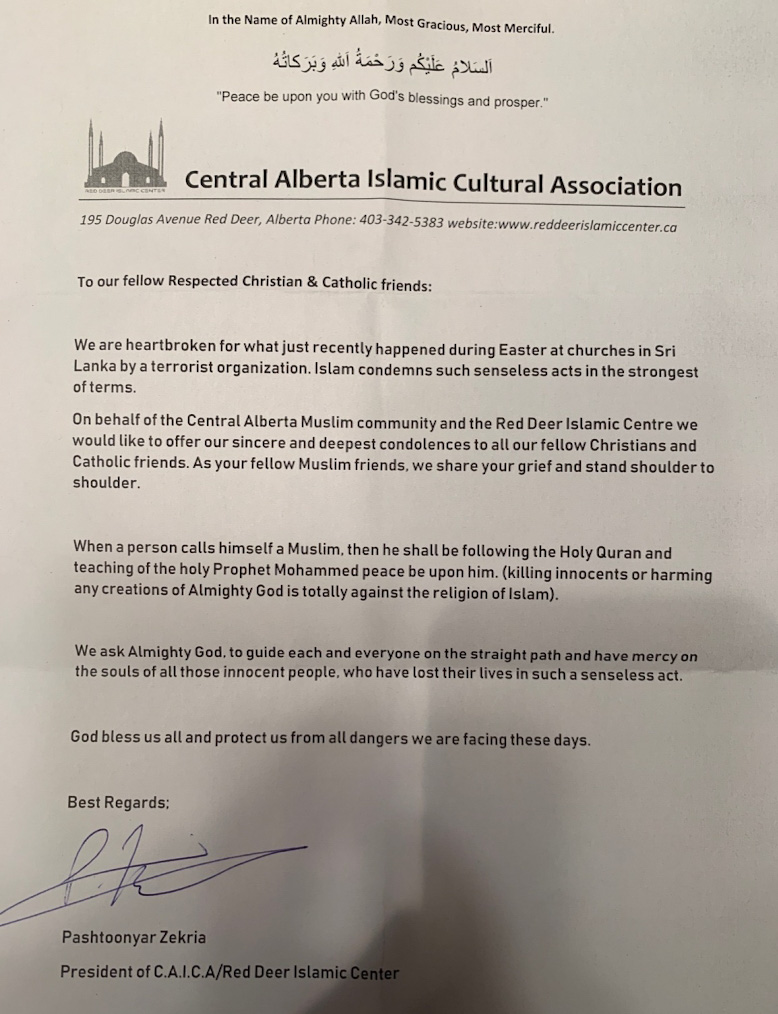 In Sri Lanka, Cardinal Ranjith also read a letter from Pope Francis dated April 24 at the end of the Mass.

“With the followers of all religions, and men and women of goodwill everywhere, we express horror at this unspeakable offense against the holy name of God and I pray that hearts hardened by hatred may yield to His will for peace and reconciliation among all his children,” the pope wrote.

“Conscious of the wound inflicted on the entire nation, I likewise pray that all Sri Lankans will be affirmed in their resolve to foster social harmony, justice and peace.”

Cardinal Ranjith has criticized the government for its failure to act on intelligence reports warning of attacks on religious places.

Cardinal Charles Bo of Yangon, Myanmar, president of the Federation of Asian Bishops’ Conferences, said in a May 3 statement that the church is deeply concerned by reports of revenge and the targeting of Muslim residents, refugees and asylum seekers in Sri Lanka.

“Many have fled persecution in their own lands and are now being targeted again. Almost 900 have been reported to have been at risk of reprisal and 150 were forced to seek shelter in police stations,” he said.

“Christians and Muslims in Sri Lanka are both minorities and have faced similar discrimination. Turning against each other will only make their plight worse. Solidarity must prevail,” he said.

The cardinal also called on religious and community leaders to foster a sense of solidarity and rebuild trust between the communities.

“We call upon the authorities in Sri Lanka to take action against hate speech and protect the vulnerable. Ignoring this issue will only foster resentment, which is exactly what groups such as Islamic State desire,” he said.

-With files from Grandin Media