Dr. Ryan Topping says there’s a collective amnesia about the gifts that the Catholic Church has given to all of us.

“We’re rather like a family that’s driving in a car filled with luggage. We’ve been sideswiped. We’ve lost our memory,” said Topping, an author, lecturer and the academic dean at Newman Theological College in Edmonton. “We still have all of these treasures stuffed around us but we don’t know what they’re for or where they came from.”

So he’s helping us all unpack and rediscover those treasures that have been given throughout history with The Gift of the Church: How the Catholic Church Transformed the History and Soul of the West.

It’s a look at the influence and contribution of the Church through its saints and sinners, heroes and villains, from the development of science – under monks and priests – to hospitals and health care, limited government, international law and the freedom from slavery.

“I wanted to offer people confidence that, in fact, history is typically on the side of the Church,” said Topping, the author of several books on Catholic education and culture.

“The more that you know about history, the more you see how the Church has permeated all of our institutions in the West, and this for the better.

“Throughout the centuries, in a unique way, you can see goods that have been brought into the world that didn’t exist before the Incarnation.”

Topping’s book, to be officially launched Nov. 28 at Newman Theological College, is the first of a two- volume set. This one takes a chronological approach. The second takes a more thematic approach – looking at the Church’s influence on the development of Western music, literature, architecture, painting, and more.

“There is this view – and it’s very strongly held – that the Catholic Church is opposed to or somehow undermines the scientific project and that reason undermines the credibility of faith,” Topping said.

“In fact, if you know the history of the development of educational institutions, there’s no other single institution that has done more for education than has the Catholic Church. Also the rise of science would not have been possible without the papacy and without the Christian contribution, which remains.”

In this book, Topping writes about 30 historical figures including Gregor Mendel, the Benedictine monk who founded the field of genetics, Jesuits who developed the first telescopes, and Georges Lemaitre, the Belgian priest who proposed the Big Bang Theory of the origin of the universe. 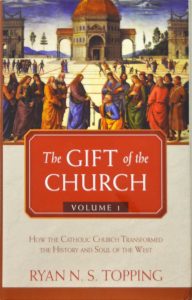 “If you look at the founding of major scientific fields, most of them have their founding by – in fact –priests, monks, or people who were trained by them” Topping explained.

Topping also noted that, in the Catholic view, faith and reason can never ultimately contradict each other.

“The early Church fathers thought that reason and revelation could never conflict. Why? Because they have the same source,” Topping said.

“Ultimately the universe derives from a common origin and therefore the same rationality that is imminent in nature also has to be manifest and imminent in Scripture, the revealed Word.”

Topping shows how certain political habits, as for example, a preference for clemency in Western legal institutions, first enter our history because of the conversion of the Roman empire.

“Constantine is a complex figure.  But he began a revolution in the Roman and hence Western legal system.  Divorce he made difficult.  The marking of a prisoner’s face he outlawed.  He began a campaign to help the poor so as to undercut one of the motives for abortion in his time. Getting rid of slavery was one of the greatest gifts that the missionaries eventually brought to the New World.”

Topping said he doesn’t claim that the Church in its actions has been infallible, and there has been cruelty, abasement and sin among its members.  But what is remarkable about the Church is its ability to make better the cultures in which it has found itself.

“The Church has the ever-abiding capacity to renew itself. If we think things are bad now, within the Church and society, it shows we haven’t spent much time looking at how bad things have been,” Topping said.

“Yet in every century, in every epoch, the Church has brought forth saints who are capable of helping us purify and renew our intentions and shine the light of the Gospel into our time and place in a new way.”

The Gift of the Church: How the Catholic Church Transformed the History and Soul of the West is published by TAN Books and available for purchase at Newman Theological College.