Pope Francis will visit the Treaty Six Territory of Maskwacis, Alberta. This is a pivotal moment for the world to…
Continue Reading

OTTAWA — Canada’s Catholic Bishops say Humanae Vitae is much more than a “No” to contraception; it is an “emphatic ‘Yes’” to Christ’s promise of fullness of life.
To mark the 50th anniversary of Blessed Pope Paul VI’s controversial encyclical, the Canadian Conference of Catholic Bishops (CCCB) released a statement July 20 entitled The Joy of Married Love, which examines the encyclical in light of St. Pope John Paul II’s Theology of the Body and Pope Francis post-synodal Apostolic Exhortation Amoris Laetitia.
“Humanae Vitae teaches that, created in the divine image, the human person is called to reflect God’s love in the world, loving the way he does—freely, totally, faithfully, and fruitfully,” says the statement, written by the CCCB’s doctrinal commission in collaboration with the Catholic Organization for Life and Family. “This is an immense responsibility.” 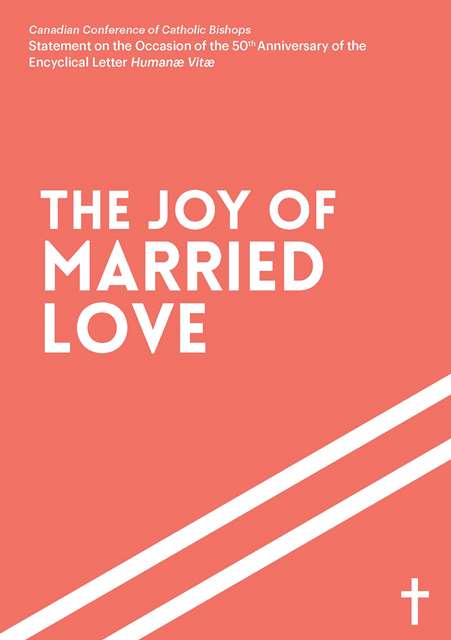 The document points out that Pope Francis praises Humanae Vitae’s teaching on the “intrinsic bond between conjugal love and the generation of life” in Amoris Laetitia.

“This means that every sexual act in marriage is meant to speak of a love which is free (not coerced), total (giving one’s whole self), faithful (devoted to one’s spouse), and fruitful (open to new life and supporting the couple’s spiritual fruitfulness),” the statement says. “Anything else distorts the beautiful language which God has written into our bodies. Weakening or falsifying this language changes the way each of the spouses experiences love; in these cases, sexual relations do not embody real love.
“While they may be well-intentioned, sexual acts that do not speak the language of such love misdirect our search for love and make it harder for us to find true and enduring love.”
The Canadian bishops say “intentionally modifying a sexual act so as to render it sterile—for example through the use of contraceptives or through sterilization—ends ups falsifying the language of our sexuality. In this case, we place clear limits on the gift of ourselves while giving the illusion of total gift.”
The bishops acknowledge the truth of married love is “not always easy to live out in practice,” and note living out the truth in Humanae Vitae can only be done by the grace of God.
“Humanae Vitae is a profound document that I encourage every Catholic to read and meditate upon,” Cardinal Thomas Collins of Toronto said in a statement. “It is as relevant today as it was 50 years ago.”
Archbishop J. Michael Miller of Vancouver. said the significance of the encyclical “has only been magnified by the consequences of the contraceptive culture we see around us. I hope Catholics and all people of good will use this opportunity to take a fresh look at this profound document and the recent statement from the Canadian bishops detailing its relevance today.”
Ottawa Archbishop Terrence Prendergast, in a July 15th column for the Ottawa Sun, wrote of the “tumultuous” context for Paul VI’s document, coming in 1968’s so-called “Summer of Love” that followed the assassinations of Martin Luther King Jr. and later of Robert F. Kennedy, widespread rioting in the United States and student riots in Paris. It was also the year Paul Erlich’s book The Population Bomb warned of overpopulation and subsequent mass starvation.
“Many theologians dissented from the teaching proposed in it,” Archbishop Prendergast said. “The letter was not infallible, they claimed, and therefore people could follow their own consciences on the issue of contraception and remain faithful Catholics.”
Douglas Farrow, Professor of Theology and Christian Thought at McGill University, said he is glad the CCCB is making an effort to “affirm” Humanae Vitae when the CCCB was among those who dissented in their 1968 “Winnipeg Statement,” which recognized some Catholics would find it “either extremely difficult or even impossible to make their own all elements of this doctrine,” and said “the confessor or counsellor must show sympathetic understanding and reverence for the sincere good faith of those who fail in their effort to accept some point of the encyclical.”
The Joy of Married Love has its merits, Farrow said, but he was hoping for more. “While not repeating the mistakes of the Winnipeg Statement, however, and indeed retreating from the most egregious of them, it still leaves us in some doubt as to just what the bishops want us to do, other than to read or re-read Humanae Vitae for ourselves.”
“While that is very good advice, it hardly disposes of the task of instruction with which the bishops ‘have been entrusted,’” Farrow said. “We’ll need to hear much more from them, and much more decisively, if any significant course correction is to be made.”
Archbishop Prendergast’s column zeroes the consequences of using contraception that Paul VI predicted in his prophetic encyclical: “marital infidelity would be easier, moral standards would fall, the respect for women would diminish, public authorities would abuse power with regard to contraceptive methods, and finally, the belief that the person has unlimited dominion over his or her body would spread.”
“You don’t have to be a rocket scientist to see that these prophecies have been fulfilled,” said Archbishop Prendergast. “From the #MeToo movement to China’s one-child policy, there are many examples that demonstrate how Paul VI was prescient.”
Farrow also noted that  The Joy of Married Love seems to stress the “unitive, rather than the procreative” as the “primary good of marriage.”
“But one would be mistaken to concede that it is consistent with magisterial teaching to substitute the unitive for the procreative as the proper starting point,” he said. “This tends in the very direction Humanae Vitae did not want us to go, the direction we have gone – to those shockingly negative effects that Married Love studiously avoids mentioning.” Farrow said.