Driving through the streets of Edmonton requires occasionally navigating some traffic circles. When I first arrived in the city, I didn’t always get that right. From my past experience of these things, my understanding was that each driver coming to the circle would yield alternatively to the other. In Edmonton, though, the one already in the circle always has the right of way; those wanting to enter need to yield. More than once I entered the circle the way I had been accustomed to do, and that left drivers standing on their brakes to avoid crashing into me. Glimpsing in the rear-view mirror I could see they were shouting something. I’m not a lip-reader, but I’m reasonably sure they weren’t saying, “God bless you.”

The heart of the Christian life is the decision to yield to the One who has the right of way: Jesus Christ. He has the right of way not only for our individual lives but also for all of history, because he is the One sent from the Father to lead us to eternal life. 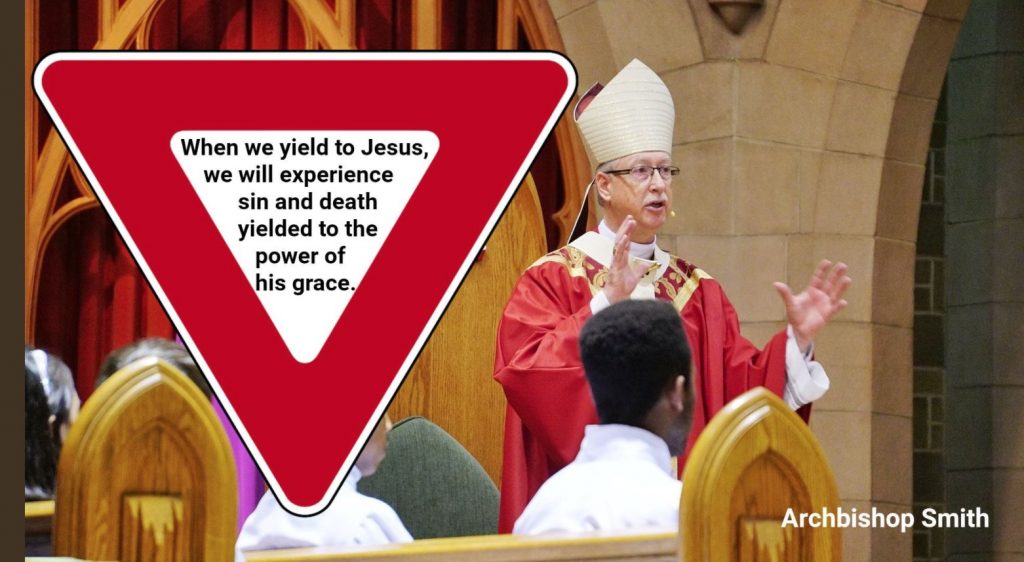 The Gospel narratives we heard on Sunday contain the accounts of people who refused to yield the right of way to him. We heard about the rejoicing crowds surrounding him as he entered Jerusalem. Things were just fine as long as they felt that Jesus was acting in accord with their expectations. When that turned out not to be the case, many drifted away, unable to yield to this man who went against their ideas of how a Messiah should be and act.

Others had been unable to yield to Jesus for quite some time. As they heard his teachings and witnessed his miracles they plotted against him. Their refusal to yield to his call to conversion led to something far worse than any road rage; they sought to put him to death.

In the liturgies of this Holy Week, we shall hear the Lord’s call once again to yield to him the right of way in our lives, to accept the path he marks out before us. This means yielding to him and his commandments, yielding to truth, yielding to self-sacrifice for the sake of others, yielding to forgiveness, yielding to the call to heal injustices, and so on. In these very holy days, let’s pray for the grace of surrender. Only by yielding the right of way to Jesus Christ will sin and death themselves yield to the power of grace and we shall thereby rise to new life in him.