Ukrainian Catholics are celebrating the completion of a $1.4-million restoration of St. Josaphat’s Cathedral, a spiritual and historic landmark in downtown Edmonton for nearly 80 years.

“My heart is filled with joy and pride at the highly successful Cathedral Restoration Project,” said Bishop David Motiuk of the Eparchy of Edmonton.

“The cathedral stands and will continue to stand as a beacon of faith in the heart of the city of Edmonton for years to come.”

Built between 1939 and 1947 in the Byzantine style, St. Josaphat’s is the central church for Edmonton’s Ukrainian Catholics.

Its year-long restoration project began in May 2016, focusing on the shingle roof  ̶  which experts said would have only lasted another two years  ̶  as well as the crumbling white concrete beams along the side of the building. Contractors also cleaned St. Josaphat’s signature wooden cupolas.

“I’m very proud of everyone who worked on this. It’s not your average project, and everyone gave it their all,” said Dan Papirnik, chairman of St. Josaphat’s restoration committee, after a recent rededication ceremony celebrating the restoration.

“I looked over at the new roof the day after it was done, and it seemed to glow as the sunlight was fading, so it was a sign that this project was special.”

Already a provincial historic site, St. Josaphat’s Cathedral received the same honour from the City of Edmonton two years ago, along with a $500,000 grant. Financing also came from the Edmonton Eparchy, the provincial government, corporate donors, and community fundraising, among other sources. The final cost is expected to be approximately $1.4 million. 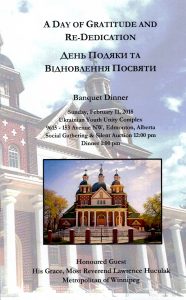 Bishop Motiuk said the work of Papirnik’s committee did not go unnoticed.

“The care and love with which the restoration committee undertook in overseeing the project is a testimony to their faith in God and in their respect for the pioneers who built the cathedral.”

This is only the third restoration in the history of St. Josaphat’s Cathedral.

It’s especially significant for Papirnik, who worked on St. Josaphat’s first restoration as a teenager in 1969. His father Fred was in charge of the project at the time. “It’s coming full circle for me.”

St. Josaphat’s Cathedral was designed and built in the form of a cross (cruciform) with seven cupolas, the largest roughly 30 metres high. The cupolas symbolize the seven sacraments and the Seven Gifts of the Holy Spirit. The church interior has three main parts: the vestibule, the nave (the main body of the church), as well as the sanctuary and altar area.

St. Josaphat’s “has many fond memories” for the Most Rev. Lawrence Huculak, who led the Edmonton Eparchy before being appointed Metropolitan-Archbishop of Winnipeg and Canada in 2006.

“From the time of their arrival in Edmonton from Ukraine in the 1930s, my mother and her parents were members of St. Josaphat’s Parish. She liked to tell me of the days of her youth where so much of her time was spent at the church, for liturgies, organizational meetings, choir practices, and various events, often fundraisers in support of the church,” Metropolitan Lawrence recalled.

Years later, the Huculak family moved to Vernon, B.C., but St. Josaphat’s Parish remained a part of them.

“Every year at Christmas time we would hear the proclamation of the birth of Christ through Christmas carols … on a record album of Ukrainian Christmas music that was recorded with a mixed choir and a men’s choir from this church, directed by Father Boniface Sloboda.”

Metropolitan Huculak and Bishop Motiuk were the co-celebrants of the Divine Liturgy during the Day of Gratitude and Rededication ceremony on Feb. 11. The ceremony marked the completion of St. Josaphat’s restoration and celebrated its long history.