Sister Elizabeth Kass is being remembered as a fearless woman who spent decades ministering to her fellow members of the deaf community, culminating in what she called the answer to her prayers – the ordination of Canada’s first deaf priest.

“For over 30 years, she made sure that the deaf community had a priest, that the three successive archbishops who served during her time here knew our needs, and tirelessly provided both catechetical and recreational activities for our community,” said Rev. Matthew-Anthony Hysell, chaplain of St. Mark’s Catholic Community of the Deaf, whose ordination made national history in 2012.

“She often said that she prayed for a deaf priest to be ordained in Canada before she died, and she accuses me of being the answer to her prayers,” Hysell quipped.

“I owe her an immense debt of gratitude, one that can only be paid, now, in suffrages for her soul,” Father Hysell said. “And even when I’m old, decrepit, and retired, I will still be in her debt.”

The people of St. Mark’s and the Sisters of Charity of Providence of Western Canada, her religious community, are also indebted to Sister Elizabeth.

“She would go out of her way to make sure they were ministered to,” said Sister Anne Hemstock, the provincial superior for the Sisters of Providence. “And she did her best to help us understand life as a deaf person. She was such a strong advocate for people of the deaf community for sure, for sure, for sure.”

That may be a bit of an understatement.

“For a wee wisp of a woman, she was certainly a spitfire,” Father Hysell recalls.

“I remember, shortly after my arrival in Edmonton, Archbishop (Richard) Smith came to celebrate Mass with our deaf community and was only going to sign a portion of the liturgy. Sister Elizabeth ‘told him off,’ and her voice carried from the sacristy all the way into the church!”

Elizabeth Kass was born on Aug. 30, 1933, in Dubuque, Iowa. The oldest of seven children, she became deaf at age 10 and attended her first school for the deaf in September 1944.

After joining the Community of Sisters of Our Lady of Seven Dolors in 1960, Sister Elizabeth taught at two schools for the deaf, where she signed in both English and French. In August 1983, she moved to Edmonton to do pastoral work with St. Mark’s Catholic Community of the Deaf.

Her ministry included preparing children for the sacraments, teaching weekly religion classes, and visiting deaf people in their homes, in nursing homes or in hospital. She became the spiritual adviser for the Canadian Section of at the International Catholic Deaf Association and wrote regular articles for Deaf Catholic magazine. Five years later, she officially joined the Sisters of Providence.

Father Hysell met Sister Elizabeth in 2006, when he was “Plan C” as preacher at an annual Lent and Easter mission for the deaf. “I was, in Sister Elizabeth’s words ‘better than nothing,’ so she accepted me as a replacement after two other speakers cancelled.”

Sister Elizabeth Kass would go on to encourage Father Hysell throughout his studies at St. Joseph’s Seminary, and after his ordination they continued to be both colleagues and friends.

“We also had many conversations about the spiritual life – something she cherished because she was the only deaf religious in Western Canada and I was the only person she could speak with in our shared American Sign Language – about the things that really mattered:  Jesus and the salvation He won for us.”

As Americans, both Father Hysell and Sister Elizabeth would celebrate the Fourth of July together over lunch and gelato. Sister Elizabeth didn’t become a Canadian citizen until May 12, 2016, when she was in her 80s.

The pair would also see each other at the American Sign Language masses in the Providence Centre chapel, and occasionally at a “mini-retreat” at the Sisters’ lake house near Wetaskiwin.

“We would have Mass, watch faith-filled movies, and enjoy s’mores over a bonfire outside.  Most of our conversations were about her experience in religious life ‑ which was often difficult ‑ and how things have changed in the deaf Catholic community, and turning-points in our culture’s history.” 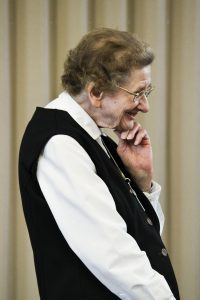 “It’s no secret that I can be abrasively arrogant at times. Being ‘called out’ on my vices was the best thing she ever did for me – and that was her best advice: Be humble.”

That was a hard lesson, Father Hysell recalls.

“One memory particularly stands out.  We were once having a quarrel and I sent her an uncharitable message that eventually made its way to the Archbishop,” Father Hysell said.

“My rector at the time, (Father) Shayne Craig, gave me a good talking-to in how to address my elders – one that I’ve taken to heart, I hope. In all of this was the tremendous lesson in patience.”

At one point, Sister Elizabeth had loaned him a book, Pride, Thief of the Holocaust, which focuses on the themes of humility, purity and the love of God. Father Hysell hasn’t read it yet – but now it seems like a good time.

“I pulled it off my shelf and decided to make it my Lenten spiritual reading.”