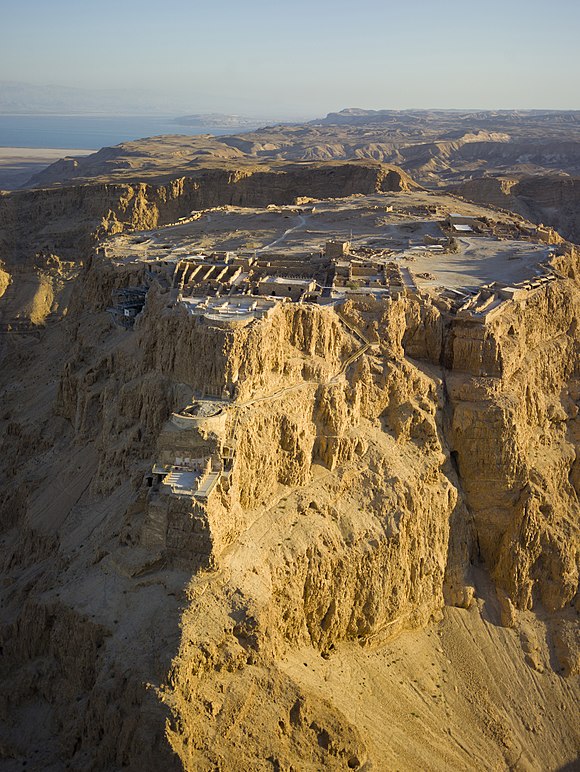 Our day began at the mountaintop fortress of Masada, or, to be more precise, at what is left of it. Herod the Great had built a palace and fortress for himself on this site between 37 and 31 BC. It is perhaps most famous as the place to which Jews sought refuge from the Romans, who laid Jerusalem waste in the year 70 AD after the rebellion of the people a few years prior. When the Roman legions caught up to them at Masada, laid siege and began to breach the defenses, the Jews there chose suicide over slavery.

It is a site of ruined hopes. Herod, in his overweening arrogance, had built magnificent monuments to himself, out of the hope of ever-growing self-aggrandizement. Nothing but ruins now. The Jews had hoped to escape the Roman vengeance. Neither hope found fulfillment.

When at the end of the day we visited the site of the Visitation, we arrived at a place where realized hope was proclaimed. In her Magnificat, sung after having been greeted by Elizabeth, Mary proclaimed the fidelity of God to His promise of mercy, a pledge upon which our ancestors in the faith had placed their hope for centuries. Hope in God does not disappoint; He is forever faithful.

In fact, out of that same fidelity God had been preparing His people for centuries to anticipate and receive Jesus Christ as the fulfillment of all his promises. Evidence of that long preparation was found at Qumran, which we visited immediately upon leaving Masada. In 1948, scrolls containing ancient manuscripts were found (some would say by chance; I’m inclined to credit Providence). Among them the most important was a scroll on which the Book of Isaiah was inscribed. This is the prophet most often cited by the Christian Church in reference to the promises of the coming of the Christ. He and the other prophets are wonderful witnesses to hope. Although they did not live to see God’s promises realized, nevertheless their conviction that they would be was unshakeable, their trust being rooted in the fidelity of God to His covenant love for His people. 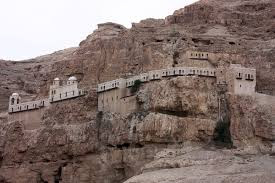 Soon thereafter, we had occasion to reflect upon the ever-present temptation not to trust in God. Just outside of the city of Jericho is the Mount of Temptation, held by tradition to be the hill in the wilderness where Jesus, immediately following his baptism, was led by the Spirit to be tempted by the devil (cf. Matthew 4: 1-11).

Our timing was appropriate, since it was just yesterday that we renewed our own baptismal promises. We considered how the Evil One was weaving through his three temptations of Jesus the same original seduction with which he tempted Adam and Eve, namely, to allow trust in God’s wisdom and providence to die and thus set oneself apart from and in competition with God.

How often does that same temptation to trust self over God come to us to draw us away from living our baptismal identity with integrity! Worse, how often do we succumb to it! We acknowledged our need to live in communion with our Lord so as to share in his fidelity to the Father and his victory over sin.

(Near this site, we found some less serious “temptations,” such as the opportunity to ride a camel. After some rather persistent encouragement by our guides, I climbed up on the beast. Now those same guides dare not come to me for confession!) 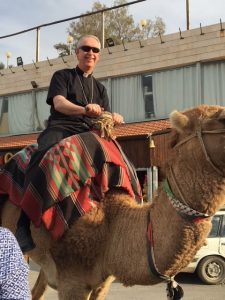 The final word of the day belonged to Our Lady. Our celebration of the Eucharist occurred at day’s end in the magnificent Church of the Visitation in Ein Karem, just outside of Jerusalem. Not only does she teach us to trust without condition in the providence of God, but also she demonstrates what it means to live from God’s love.

When she received the annunciation of Gabriel, she learned also from the angel that her cousin in Elizabeth had in her old age conceived a child. Knowing immediately that Elizabeth was in need, she set out “with haste” through the hills of Judaea to visit with her for as long as necessary.

Visiting this land and seeing for ourselves the nature of the terrain, we realize now how full of meaning this is. The journey would have been very arduous for Mary. Yet she did not hesitate, because true charity neither admits of delay nor yields to obstacles. Her example teaches us that as we magnify the Lord for his greatness and rejoice in the realization He gives of our deepest hopes, our surrender in trust to God’s love will impel us to be ready agents of mercy and love to any in need.

Tomorrow we head to Bethlehem.