Margie Harper entered the hospital this year on the first day of Lent, her forehead still bearing a dark smudge from the Ash Wednesday Mass.

At first, her daughters Margo Harper and Carolynn Bilton thought their mother had pneumonia and that she would recover. But it quickly became clear that she would not be going home to Paintearth Lodge, the seniors home in the central Alberta town of Castor where she had lived her last years.

So Margo and Carolynn settled into the palliative care room of Our Lady of the Rosary Hospital for the longest sleepover they’d had with Mom since they were children — and a life-changing Lenten journey by her side.

“At one point in Mom’s last days, she asked … if we were all together in hospital on a spiritual retreat,” said Margo. “We didn’t know it then, but Mom, the answer is yes. ‘Yes we were, and yes we are.’”

Margie died on April 1, a full 30 days after entering the Castor hospital. She was 97. Her end-of-life journey was featured in Lasting Impressions, the 2017 annual report to the community by Alberta-based Covenant Health, Canada’s largest Catholic healthcare provider.

The story underscores the significant impact that palliative care — the practice of alleviating pain and suffering for patients as they near death — can have on a person and their family. It’s a growing discipline in medicine, but one to which the majority of Canadians have no access.

“It was a beautiful, final time, a beautiful death,” remembers Carolynn. “What was so beautiful was that the hospital allowed us the space to make this journey with Mom.

Margie’s last days on earth were filled with singing, poetry, champagne, cake, laughter, lots of prayer, lots of tears, and lots of family.

“She was dying and we were supporting her dying process, but there was also living,” said Margo.

Extended family members gathered around her bed, holding hands, reminiscing about the past, sharing grief, sharing joy. “Children and grandchildren kissing Mom goodbye, stroking her hands, experiencing death and loss not from a distance but up close, seeing that death is normal, natural, and not something to be feared.”

“Even though she was in excruciating pain at times, I could see her transcend that and kind of give over her spirit to the people who came to see her,” said Margo. “And she created this kind of sacred space that was just full of love.”

“Mom taught us not only how to live,
but she also taught us how to die.”

For Margo, a Vancouver-based journalist who had pulled away from her faith over the years, the experience brought renewal.

“She seemed often to be looking at Heaven, at Jesus, at the great mystery,” added Carolynn. “Whatever it was, in the end there was no fear, no grasping, no clinging to this world. She was moving on. It was a tremendous thing to witness. I believe that Mom taught us not only how to live but she also taught us how to die.”

It was the renewed faith the sisters received at that hospital bedside that gave them the power and strength to care for their dying mother, who having been a nurse herself for 45 years, had cared for so many others in her life.

For the baby boomer generation, whose parents are now aging, death is the next frontier, said Margo.

The day before Margie died, the family celebrated Margo’s 57th birthday in the hospital room.

“I kissed Mom’s cheek and whispered in her ear, ‘Thank you for giving me life, Mom.’ Her eyes were closed, but I’m pretty sure that she squeezed my hand,” said Margo. “I like to think that she willed herself to see my birthday.

“She had tremendous FOMO (fear of missing out) and there’s nothing more that she loved than a good party, so she was gonna stay alive for the last party and she did.”

“The conversation starts with
what is most important to you,
and what is the kind of care
and quality of life that you wish.”

Dr. Konrad Fassbender, Scientific Director for the Covenant Health Palliative Institute, says a patient-centred philosophy is foundational to palliative care. In other branches of medicine, the medical specialist makes recommendations to the patient based on their expertise, but in palliative care, the patients tell the caregivers what is important to them — whether it’s wanting to stay alive for a daughter’s birthday party or a graduation, or to see a pet one last time.

“In palliative care, the conversation starts with what is most important to you, and what is the kind of care and quality of life that you wish, and how do we achieve that,” said Fassbender. “That’s called patient-centred care.”

Anik Kuefler, a registered nurse at Our Lady of the Rosary Hospital, described Margie as a leader in her care.

“Being a nurse herself, she really needed the details of what we were doing, what the physicians said and what their thought process was,” Kuefler said in a prepared statement. “She always respected opinions but always in the end made the decisions for her own health.”

“She lived a life of such dignity, as a community member and a nurse. I witnessed that in her life as well as her death.”

The way healthcare providers look after the dying has changed. Fassbender notes that advances in medical technology over the last 100 years have doubled the average lifespan, with the result that medicine as a whole has become focused on extending the length of life. Think of the words often used around cancer cases: fight, be a champion, survive.

“A lot of the language within medicine is around the concept of extending life at any option,” he said. “What we’re learning and what we’ve learned through the last 40 years in palliative medicine is that the dying process should not be focused exclusively on extending the length of life but that we should also look at the quality of life. So another way of defining palliative care is to say that it is the art and practice of medicine that focuses on improving the quality of life.”

One of the biggest misconceptions is that accessing palliative care means giving up on recovering, said Fassbender, citing a 2010 study published in the New England Journal of Medicine. The study found that after a cancer diagnosis, people who have monthly visits with a palliative care doctor or nurse while taking the usual treatment, live three months longer than those who do not have a palliative care visit.

“Palliative care alongside active treatment not only improves quality of life but also quantity of life,” he said.

While Margie’s experience exemplifies the benefits of palliative care, many dying Canadians are not so fortunate.

“What’s the best thing that we could do today to make the world a better place? It isn’t to talk about Margie, because her care was good,” said Fassbender. “But what about all the people that are dying at home that no one knows about? What about the homeless people that are dying in the emergency room? And so what we as a society need to do is to educate on what is palliative care.”

The philosophy of palliative care should be encompassed by everyone in the healthcare system, said Fassbender, including the home care nurse, family doctor, oncologist, cardiologist, and nephrologist.

“Everyone should have a basic knowledge of palliative care, because very often in the medical system when the doctors, the surgeons, are focused on improving your quantity of life, they forget about the rest of the patient,” said Fassbender. “So they sew them up and the anaesthesiologist sticks around long enough that there’s no side-effects, the nurse says make sure there’s no infection of the wound, and we send the person home.

“As a family member, you’re sitting at home saying, ‘Please, mom is still in pain. Is that normal?’ Or she’s tired, she’s fatigued, she can’t participate in her usual activities. So what is an acceptable amount of suffering?”

Medical assistance in dying, the legal term for physician-assisted death, is not palliative care, said Fassbender. In fact, it actually increases suffering. 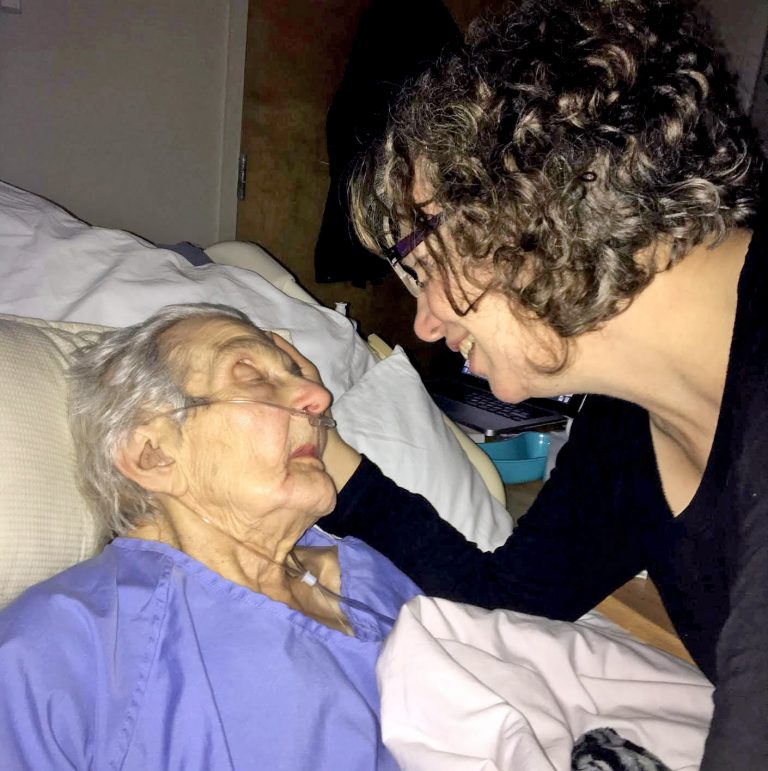 “Imagine that your loved one — maybe your mom, dad, grandfather — is suffering and they require care, time, and help. Now they’re going, ‘There’s medical assistance in dying, if I do that I’m going to be able to pass on more money to you, I’m going to be less of a burden.’ Do we really want people to think about that? It’s awful we’re giving them a choice now that they didn’t have before.”

“When symptoms are looked after, people are able to participate meaningfully and find meaning in life.”

Margo and Carolynn learned a great deal about palliative care from the hospital. In their mother’s case, it meant seeking a balance between controlling pain and maintaining lucidity.

“There are so many final conversations to have when you’re dying,” said Carolynn. “So many hands to hold. For Mom, so many blessings to give.

“I believe that mom was gifted with this period to prepare for her death, to do the spiritual preparation. It gave us such comfort that as she moved closer to death, she moved into a place of such peace.”

Margie Harper’s Prayer Vigil took place on Palm Sunday, the final Sunday of Lent. Next year, the family will honour the anniversary of her death when they gather on Easter Sunday.