For Monica Nino, the path to a career in international development began in rural Ngongo, Kenya, in 2011.

She was 18 years old, thousands of kilometres from her home and family in Calgary, on a three-week internship, working with women and children living with HIV/AIDS.

“I was exposed first hand to extreme poverty. It’s something I hadn’t seen before,” said Nino, the new western animator – or regional representative – for Development and Peace, the official international development organization of the Catholic Church in Canada.

“I was able to see the power when you support an already established organization, when you support local people in their fight to look for those answers and those alternative solutions … And that’s how Development and Peace works.” 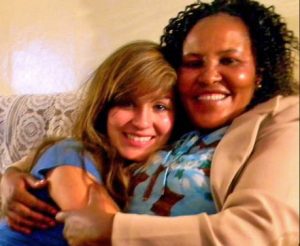 Development and Peace partners with local organizations in more than 20 countries to address political, social and economic injustice. It’s supported by parish collections (for emergency appeals as well as the Together We Serve annual appeal in the Archdiocese of Edmonton), individual donations and government grants.

Nino was appointed western animator for Development and Peace on March 1. She succeeds Anupama Ranawana who resigned to pursue her academic career.

Nino’s role is to increase group and individual membership in Alberta and the Northwest Territories and to educate Canadians about the causes of poverty.

“We’re working with the most marginalized in society. It’s local people who know what the problem really is. They are the ones basically providing the solutions. We’re just there to support them.”

In Paraguay, Nino said Development and Peace helps farmers sell their products at a fair price.

“By providing space for them to bring their products, we’re helping them become self-sustainable.”

In war-torn Syria, Development and Peace is helping peace and reconciliation efforts, increasing gender equality and empowering women by building their skills so they can become self-sustainable.

“It’s amazing to see the work that they do, despite the difficulties that you see on TV or on the Internet,” Nino said. “It’s really that desire to build their communities up again and support the people who are suffering the most, just giving hope to people.”

“We love as Catholics but we don’t expect people to be Catholics to help them. We just want to help the poorest of the poor, the people who need help the most.”

Nino was born in Bogota, Colombia and immigrated with her family to Calgary in 2007. She graduated with a bachelor’s degree in international development at the University of Calgary in 2015. It was one of her professors who suggested she apply for her current position.

“It’s very important to me that Development and Peace does its work based on Catholic social principles,” said Nino. “It’s based on the Gospel values, so for me that combination of doing development and the faith background ̶ it was perfect.”

Nino said one of her goals as western animator is to get more youth involved.

“We need people to carry out that mission. Younger generations maybe don’t know that we’re out there,” she said. “Here’s how you can do something. Here’s how you can become a global citizen and really make a difference.”