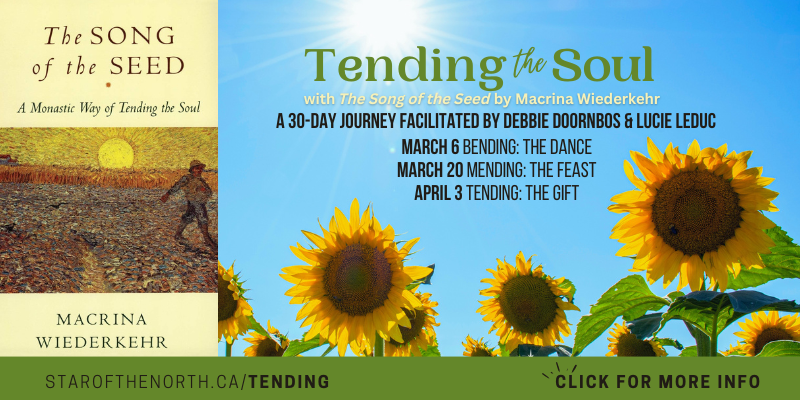 These three retreat group gatherings will provide ritual, introduction, and process for participants to enter three stages of ten, at home, in-depth reflections with the scriptures. On the first gathering, we will review the “Groundwork” for “Part I Bending:  The Dance” and be introduced to the process Macrina Wiederkehr provides for our at home prayer with scriptures. The second gathering, we gather for ritual again to recall the graces of Part I and move into Part II Mending:  The Feast.  Day three, follows the same outline as the latter and moves us into Part III Tending:  The Gift.  Come be enriched by the Word and transformed on the journey.

Lucie Leduc works and ministers as an educator, retreat facilitator, spiritual director, and writer, along with her primary role and responsibility as Executive Director for The Star of the North Retreat House.   Her twenty-five years of experience in Oblate retreat ministry and thirteen years as a Spiritual Director, have been years of privileged journeying, learning, and growing with others towards mature Christian spirituality and faith.  Raised and committed in the Roman Catholic tradition, her Christian formation has come through formative family and religious relations, as well as studies at Oblate School of Theology in San Antonio, Texas with an M.A. in Spirituality in 2017, and at Newman Theological College, Edmonton, with a variety of M.Div. courses.  She received her B.Ed at the U.ofA. with a major in English and minor in Moral and Religious Education in 1992.  Much of her faith and spirit were shaped as an Oblate Associate journeying with Oblates and Oblate Associates in the family of St. Eugene de Mazenod.

Debbie Doornbos is a trained and experienced facilitator, retreat leader and spiritual director with a special interest in journeying with people through major life transitions. She has extensive experience leading small groups, creating and facilitating workshops and retreats and leading group process. Currently Debbie is the Canadian Director of the Sacred Art of Living Centre. Prior to this Debbie was the Program Director at Providence Renewal Centre in Edmonton for eleven years. In that capacity she led a team in the development of renewed spiritual direction formation program. She also led several retreats on various topics related to spirituality and personal growth.

REGISTRATION:
Please note that the cost of book is not included;  pre-requisite purchase of the book The Song of the Seed: The Monastic Way of Tending the Soul by Macrina Wiederkehr is required for this retreat.